Please ensure Javascript is enabled for purposes of website accessibility
Log In Help Join The Motley Fool
Free Article Join Over 1 Million Premium Members And Get More In-Depth Stock Guidance and Research
By Jeremy Bowman - Updated May 19, 2020 at 1:00PM

The online used-car dealer fell after it announced a secondary offering.

Shares of Carvana (CVNA -18.46%) were pulling back today after the online used-car dealer announced a secondary offering, its second equity offering in less than two months, as the company seeks to improve its cash position during a volatile period. 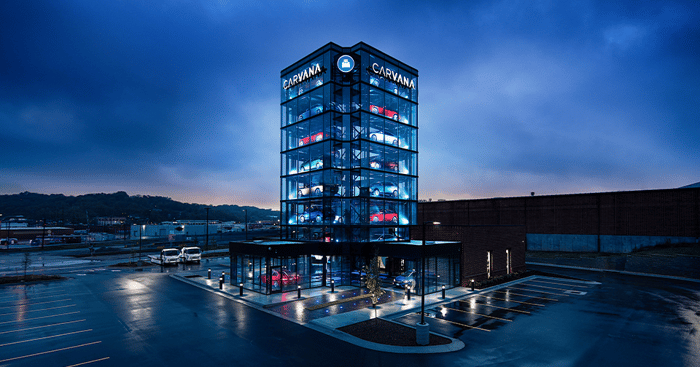 Carvana said last night that it would offer 5 million shares at a price range later revealed to be $93 to $96, bringing in close to $500 million in cash for the fast-growing used car dealer. The company said it intends to use the proceeds for general corporate purposes and to repay debt.

Investors tend to dislike secondary offerings because they dilute current shareholders, but it's smart for Carvana to take advantage of the current lofty share price to recapitalize during an uncertain time. Shares have been on a wild ride since the coronavirus sell-off began, falling from $115.23 on a Feb. 20 to $22.19 on March 18, before recovering all the way to $109.30 on May 8. On Monday, it closed at $98.59.

At the end of March, Carvana, which is still unprofitable, raised $600 million at a price of $45 per share in a direct offering to existing shareholders. Today's secondary offering, by contrast, will make shares available on the open market.

Before the pandemic, Carvana had seen incredible growth with more than 20 straight quarters of triple-digit revenue growth. Last year, revenue jumped 101% to $3.94 billion. That pace slowed to 45% in the first quarter, and after sales fell in the first few weeks of the pandemic, they returned to 20% to 30% growth in recent weeks, which should reassure investors.

As of March 31, Carvana had just $72 million in cash on the balance sheet, and the company is burning cash rapidly due to its high-growth strategy, with negative $258 million in free cash flow in the first quarter. That explains why it's raised $1.1 billion in cash since the beginning of April, and the company now believes it has significant liquidity for multiple years of growth.

With its e-commerce and vending machine model, Carvana should have an advantage over more-conventional used car dealers, as it can easily enable contactless purchasing and pickup. Though sales growth may be slower over the coming months, recessions tend to favor used car  sales over new models, meaning Carvana's advantage over rivals could expand during the crisis.