Please ensure Javascript is enabled for purposes of website accessibility
Log In Help Join The Motley Fool
Free Article Join Over 1 Million Premium Members And Get More In-Depth Stock Guidance and Research
By Zhiyuan Sun - May 19, 2020 at 6:02AM

A leading company in the field of gene silencing is on track to develop several breakthrough therapies.

With seven gene silencing candidates currently in clinical trials, Arrowhead Pharmaceuticals (ARWR 3.64%) is making rapid progress in developing solutions to some of the rarest and most difficult-to-treat diseases around the world today.

The company's efforts have attracted attention across the industry. Although the studies are in their early phases, the efficacy data from Arrowhead's clinical candidates indicate it may have developed several breakthrough therapies. Let's take a look at why the company is a solid buy that will keep biotech investors satisfied for years to come. 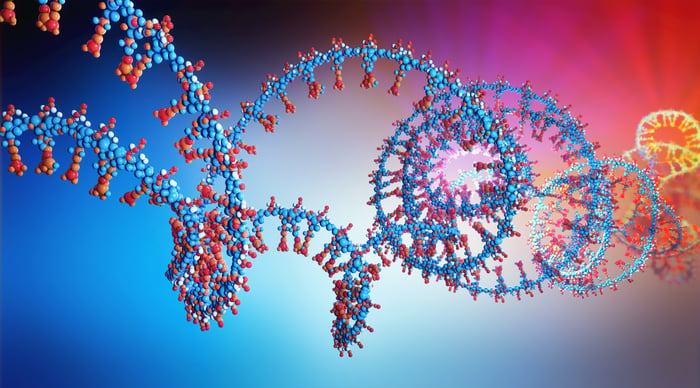 Just how good is Arrowhead's pipeline?

First up, the company has attracted significant interest in its pipeline from pharmaceutical giants. In 2018, the company landed a partnership with Johnson and Johnson (JNJ -1.10%), which can bring in upwards of $3.4 billion if Arrowhead is successful in developing ARO-HBV, an RNA interference therapy designed to eradicate the hepatitis B virus (HBV).

The claim is far from ambitious as it is amply backed by clinical data. Currently, patients with HBV must take nucleotide analogues (NAs), such as entecavir and tenofovir, to mitigate the amount of virus in the body, and less than 3% of patients who take these drugs can be cured of the disease.

In phase 2 clinical trials, about 26 out of 43 patients who were treated with ARO-HBV and NAs were functionally cured of the condition after approximately four months of treatment. While there was no placebo cohort to compare to, the results are very promising given that NAs alone were never able to achieve the same level of efficacy. This gives the company a potential breakthrough candidate to target the global HBV market, which is set to grow to $2.13 billion by 2026.

But that's not all. Arrowhead is also studying the effects of another RNA interference therapy, ARO-AAT, for the treatment of a rare liver disease associated with accumulation of the alpha-1 antitrypsin (AAT) protein. This protein is synthesized in the liver and serves to protect tissues in the lungs. If its pathway to the lungs becomes jammed, then it will start to collect in the liver and cause serious injury.

In a phase 1 trial, the vast majority of 45 healthy volunteers who took ARO-AAT saw over 90% reductions in their serum AAT levels and saw this metric maintained over six weeks. If successful in later phases, ARO-AAT may become a functional cure for the condition it is targeting, just like ARO-HBV. However, it's worth noting that finding the right therapeutic window will be important as AAT is critical in protecting lung tissues from irritants in the air. Nearly 40% of volunteers in phase 1 reported upper respiratory tract infections as a result of the clinical study.

Phase 1/2 interim data was recently released for two of Arrowhead's cardiometabolic candidates, ARO-APOC3 and ARO-ANG3. Each candidate was able to inhibit key proteins in patients that corresponded to a 79% to 95% reduction of triglycerides and a 39% to 42% reduction of low-density lipoprotein cholesterol (commonly known as "bad" cholesterol), with minimal dosage. The study consisted of people with high levels of triglycerides and cholesterol, respectively. Hence, a stunning level of efficacy this early on in the clinical trial stage is very promising.

Most of Arrowhead's clinical products will likely advance to the next round of clinical testing by the end of 2023. Its most advanced candidate is ARO-APOC3 -- it may enter phase 3 as early as 2021 and become Arrowhead's first product to hit the market.

Currently, Arrowhead has about $500 million in cash and investments to offset a net loss at an annual run rate of $45 million. This gives more than enough protection for investors concerned about potential dilution while the company reaches its research and development goals. I believe investors wishing to be a part of the frontiers of gene silencing technology should consider adding Arrowhead to their portfolios.