Please ensure Javascript is enabled for purposes of website accessibility
Log In Help Join The Motley Fool
Free Article Join Over 1 Million Premium Members And Get More In-Depth Stock Guidance and Research
By Zhiyuan Sun - Updated May 20, 2020 at 8:46AM

Here are the hottest companies coming up in the biotech sector.

The art of biotech investing requires a great deal of scientific knowledge, awareness of financials, and patience in waiting for clinical trials to come to fruition. For investors who can master the discipline and pick out the right stocks, a lot of money can be made.

Today, let's examine two of the best biotech stocks in the industry; both are companies making rapid progress in treating patients with significant medical needs. 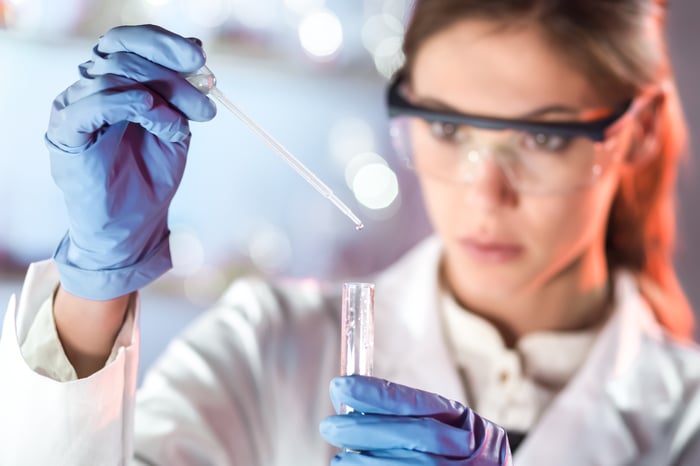 Compugen (CGEN -7.18%) specializes in clinical-stage cancer immunotherapies, which have proprietary algorithms used to detect specific sequences within protein receptors that regulate the immune system and inhibit autoimmune activity. Normally, these receptors prevent T-cells in the body from attacking healthy tissues. Cancer cells, however, are known to evade detection by the body's own immune system by posing as healthy cells through these receptors, a process known as peripheral tolerance. Hence, by blocking the pathways of cancerous cells disguising themselves as healthy cells, the immune system can recognize them as pathogens and form an effective response.

Currently, immunotherapy drugs such as nivolumab, pembrolizumab, and ipilimumab target the PD-1 and CTLA-4 checkpoint inhibitors. On the other hand, Compugen is developing COM701 to target the PVRIG receptor and COM902 to target the TIGIT receptor, both of which are novel discoveries.

Recently, Compugen's shares sold off by more than 20% due to mixed results from a competitor drug's clinical trial targeting the TIGIT receptor. However, this may actually represent a good buying opportunity.

On May 13, Roche Holdings' (RHHBY 1.39%) phase 2 data for tiragolumab were released. In this investigation, 135 patients with newly diagnosed small-cell lung cancer were randomized into two cohorts, consisting of treatment via either Tecentriq (an anti-PD-L1 drug) and placebo, or Tecentriq and tiragolumab. By the trial's end, median progression-free survival (the length of time during and after treatment that a patient lives with the disease but it does not get worse) in the placebo cohort was 3.6 months, compared to 5.4 months in the tiragolumab cohort.

A survival benefit of 1.8 months isn't really that impressive, and has some investors skeptical about the potential of all anti-TIGIT drugs, such as COM902. Fortunately, COM902 isn't being tested alone in its phase 1 clinical trials, but in combination with COM701. In an interim data release, some patients with advanced-stage cancers, in whom 2 to 15 courses of therapy had failed, demonstrated partial complete response (defined as greater than 30% reduction in tumor diameter) when they were given COM701.

Hence, there may be significant synergistic effects associated with COM902 and COM701 that will amplify the chance of trial success if the therapies are given together. Keep in mind that should its novel immunotherapy candidates be successful, Compugen will be eligible for up to $500 million in milestone payments from three pharmaceutical giants. In addition, the company's financial health is superb, and it has the backing of a reputable institutional investor.

Last year, Vertex Pharmaceuticals' (VRTX -1.79%) Trikafta was approved by the U.S. Food and Drug Administration for the treatment of cystic fibrosis (CF). According to the Cystic Fibrosis Foundation, CF is "a progressive, genetic disease that causes persistent lung infections and limits the ability to breathe over time." There are an estimated 75,000 patients with CF in North America, Europe and Australia combined. Vertex already markets three drugs to treat CF in patients with at least one key defective gene, and last year, the company's revenue amounted to over $4 billion.

What is amazing about Vertex is how Trikafta is sending the company's sales into uncharted territory. The superdrug is a combination of all three of Vertex's protein correction therapies for targeting CF. In clinical studies, patients who took the drug saw a 13.8% increase in their ability to exhale.

Although the efficacy appears modest, the drug is rapidly gaining traction in the industry. In the last quarter, sales of Trikafta amounted to a staggering $895 million, which is over $3.5 billion at an annualized rate. Meanwhile, Trikafta isn't necessarily taking market share away from the rest of Vertex's products, as the company's total revenue nearly doubled during the quarter compared to last year.

Together, all four drugs can treat up to 60% of the total addressable market for CF. In addition, sales of Trikafta have the potential to grow even further, as the company is currently seeking its approval in Britain and in the EU.

But it gets even better. To me, Vertex seems like a "jack of all trades, and master of them all" kind of company. Currently, Vertex is very profitable, with $602.7 million in net income generated in the past quarter, despite spending nearly 30% of its revenue to fund further research and development expenses.

Furthermore, Vertex has over $4 billion in cash and investments on its balance sheet to offset about $700 million in debt and financial leases. In short, Vertex is an ideal stock for biotech investors interested in growth at a reasonable price.