Please ensure Javascript is enabled for purposes of website accessibility
Log In Help Join The Motley Fool
Free Article Join Over 1 Million Premium Members And Get More In-Depth Stock Guidance and Research
By Eric Volkman – May 20, 2020 at 4:38AM

The move comes amid a marked improvement in the company's business.

The board of directors of Camping World Holdings (CWH -0.37%) has declared a pair of dividends for shareholders of the company's common stock. The recreational vehicle (RV) accessories retailer will pay a regular quarterly disbursement of $0.08 per share, then a special dividend of just over $0.07. Combined, the slightly more than $0.15 per share is expected to be paid on June 30 to investors of record as of June 15.

Although special dividends are usually handed out on a rare and irregular basis, Camping World's special dividend has accompanied the regular payout since early 2017. The two dividends' combined yield is 3.4% on the stock's most recent closing price. 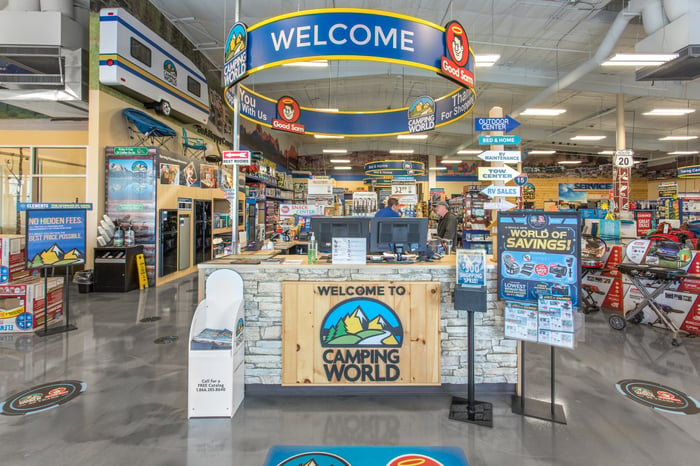 Camping World started paying dividends shortly after its 2016 IPO. It began with the regular cash dividend, then soon began tacking the special distribution on top of it.

In recent weeks, Camping World stock has seen a sharp rise in price. Earlier this month, when discussing its first-quarter 2020 results, the company said that it was experiencing a spike in sales. That followed a slowdown as the coronavirus began to spread. The spike could indicate that some people wanting social distancing during the pandemic are hitting the road in RVs, and equipping themselves for long jaunts.

What also might have helped improve sentiment on the stock were the Q1 results, in which the company beat analyst estimates both for revenue and profitability.

On Tuesday, Camping World stock added slightly to its recent rally, ticking up by 0.8% on the day. That was a better performance than the wider stock market, however, not to mention many peer consumer goods stocks.