Please ensure Javascript is enabled for purposes of website accessibility
Log In Help Join The Motley Fool
Free Article Join Over 1 Million Premium Members And Get More In-Depth Stock Guidance and Research
By Timothy Green - May 20, 2020 at 12:38PM

Coca-Cola sees a long recovery ahead, and Intel struggles to catch up with AMD.

Shares of beverage giant Coca-Cola (KO 0.03%) and chip giant Intel (INTC 0.70%) surged on Wednesday, despite negative news for both companies. Coca-Cola's CEO warned in an interview about weak sales volume in May and a painful recovery from the pandemic, and Intel's latest high-end gaming CPU was met with mixed reviews.

Coca-Cola depends on the restaurant industry and other away-from-home channels for roughly half of its revenue. With U.S. restaurants still largely operating without dine-in service, the century-old beverage company is taking it on the chin. 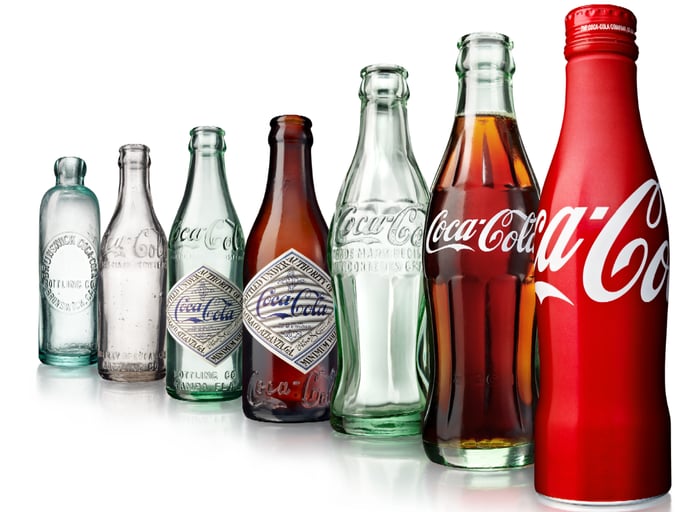 Global sales volumes were down around 25% in April, and that negative trend continued into May, according to CEO James Quincey in an interview on CNBC's Squawk Box. Volumes are down less in May, but Quincey expects consumers to be more frugal as the world exits lockdown.

"We're gonna have to recognize that coming after this virus crisis will be the economic impact and hangover of the lockdown, and there will be a much greater focus from the consumer on affordability or getting the prices lower," Quincey told CNBC.

In China, where stay-at-home orders began being eased in April, sales have still not recovered to prepandemic levels. "The economic impact of the lockdown is just starting to begin," Quincey said.

Even after restaurants, movie theaters, and other venues reopen, some consumers may not return until the pandemic is fully contained. Coca-Cola's sales should bounce back to a degree as the U.S. economy reopens, but demand may settle at a substantially lower level than the company is used to.

Despite Quincey's warnings about a slow recovery, shares of Coca-Cola were up 3% by late Wednesday morning. The stock remains 24% below its 52-week high.

The story in the PC CPU market over the past couple of years has been a renewed competitiveness between Intel and rival Advanced Micro Devices (AMD 2.50%). Intel spent many years in a dominant position, with AMD's inferior products left with the scraps. But starting with the launch of AMD's Ryzen processors in 2017, the tables began to turn.

AMD is now on its third generation of Ryzen chips, which are built using an advanced 7-nanometer manufacturing process supplied by TSMC. Intel builds its chips in-house, but it's struggled to move away from its aging 14nm process. This has opened the door for AMD to make a comeback.

On Wednesday, the first reviews for Intel's new line of desktop processors began to roll out. The i9-10900K, a 10-core chip priced at nearly $500, is Intel's answer to AMD's high-end Ryzen offerings. The problem for Intel is that this power-hungry chip comes with a big downside.

The 10900K goes up against AMD's Ryzen 9 3900X, a 12-core chip that can be found at retail right now for $420. Intel's new chip is powerful, outperforming AMD's chip in some tests, particularly when the core count doesn't matter. But it does so by using a tremendous amount of power. Under load, Tom's Hardware found that the 10900K drew about 75% more power than AMD's chip.

Intel's struggles dealing with competition hasn't really hurt the stock. While Intel stock is down 9% from its 52-week high, it's up 40% over the past year. Shares of Intel were up 4.9% Wednesday morning as investors ignored the mixed reviews for its latest chip.