Please ensure Javascript is enabled for purposes of website accessibility
Log In Help Join The Motley Fool
Free Article Join Over 1 Million Premium Members And Get More In-Depth Stock Guidance and Research
By Leo Sun - May 20, 2020 at 7:15AM

But the next-gen platform still only generates a tiny sliver of the company's total revenue.

Facebook (META 1.70%) launched the Oculus Quest, its second stand-alone VR headset after the Oculus Go, last May. It sold 705,000 Quest headsets last year, according to SuperData, which missed the research firm's forecast for 1.1 million shipments.

That tepid interest was disappointing, but Facebook recently revealed that it sold over $100 million in VR content for the Quest over the past year. Facebook notably claimed it sold $100 million in content across all its Oculus headsets last October -- so the latest announcement indicates the Quest's ecosystem is growing at a faster clip than the software platforms of its PC-tethered headsets.

$100 million in sales also indicates each Quest owner bought over $140 in content for the $400-$500 devices, which remained in short supply throughout most of 2020 because of COVID-19. Facebook also revealed that 20 Oculus titles have each generated at least $1 million in revenue, and 10 of those titles surpassed $2 million in sales.

Facebook clearly remains committed to the VR market, which it entered after acquiring Oculus VR for $2 billion in 2014. But will the Quest's content revenue gains move the needle for the tech giant anytime soon?

Facebook generated $17.4 billion in revenue, or 98% of its top line, from online ads last quarter. The remaining $297 million came from its "other" businesses, which include its Oculus and Portal devices. 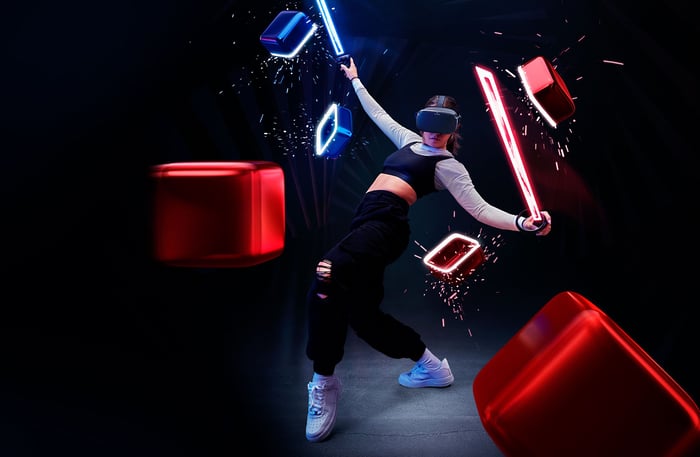 Facebook's ad revenue grew 17% annually during the quarter, but its "other" revenue -- "driven primarily by sales of Oculus products" -- soared 80%. During the conference call, CEO Mark Zuckerberg declared the Quest had "surpassed our expectations," and he wished the company could "make more of them faster." Zuckerberg noted Facebook's Oculus and Portal devices enabled people to "feel present" over long distances, and the market for those remote communications tools was growing throughout the crisis.

Zuckerberg also suggested the surging usage of videoconferencing tools could "accelerate some of the trends" in the virtual and augmented reality markets. That acceleration could build a firmer foundation for its new Oculus devices and upcoming AR headsets.

But for now, the Oculus business only generates a sliver of Facebook's total revenue, and it probably only generated $30 million from $100 million in sales (based on a 30% cut of each purchase) -- which equals just 0.04% of its projected revenue this year.

Why is the Oculus Quest gaining steam?

Oculus' older Rift headsets were expensive, heavy, and tethered by wires to high-end gaming PCs, which were cumbersome and limited a gamer's mobility.

Facebook addressed those issues with the cheaper Oculus Go, a stand-alone wireless device that closely resembled a mid-range smartphone installed in a VR headset. But the Go, which originally cost $200, couldn't handle higher-end VR apps, and didn't offer users "six degrees of freedom" in VR movements.

Facebook addressed those issues by adding beefier hardware with six degrees of freedom in the Quest. Those upgrades attracted more developers and mainstream consumers to the platform, although it remains a niche platform compared to smartphones and gaming consoles.

The Quest's top-selling games currently include Beat Saber, Tetris Effect, Vader Immortal, Angry Birds VR, and Job Simulator. These games generally cost between $10 to $30 apiece, which places them in a niche between cheap mobile games and pricier PC and console games.

If the Quest's content library grows, Facebook could reduce its headset prices and sell them at a loss to make up the difference in software sales. That strategy, which has been used by gaming console makers for decades, could help Facebook squeeze more revenue from each Oculus user as it expands its ecosystem.

Still a nascent market, with lots of growth potential

The global VR market could still grow at a compound annual growth rate of 34.2% between 2018 to 2025, according to Fior Markets. That bullish forecast could be too optimistic, but Facebook's slow but steady progress in the market indicates VR headsets could eventually become as common as mainstream gaming consoles.

If Facebook sells more VR headsets, it could pave the way for its core social network to become a VR experience in which users visit each other with their headsets instead of their PCs and phones. That evolution might change how we perceive social networking and remote communication over the next few decades.