Facebook (FB 1.41%) is developing two pairs of augmented reality (AR) smartglasses, according to The Information's Alex Heath. The first one is codenamed Stella and could launch between 2023 and 2025, and the second is a more advanced AR device codenamed Orion.

Facebook is teaming up with EssilorLuxottica's (ESLO.F 0.21%) Luxottica, the maker of high-end eyewear brands like Ray-Ban and Oakley, as well as licensed eyewear for fashion houses like Burberry and Armani, to design Stella. Heath claims that Luxottica isn't involved in Orion's development.

Stella will reportedly be similar to Snap's (SNAP 10.71%) Spectacles, with onboard cameras for photos and videos, but Stella could include a new AI-powered voice assistant. As for Orion, CNBC claims that it could be an all-in-one replacement for smartphones with a heads-up display for taking calls, live streaming videos, and running apps, and that it could be controlled by a ring device codenamed Agios.

Stella and Orion won't move the needle for Facebook anytime soon, but they could expand its ecosystem far beyond PCs and mobile devices and set up the foundations for future businesses.

Smartglasses were once considered the next big computing platform after smartphones, yet they remain niche devices for tech enthusiasts and certain enterprise markets.

Alphabet's (GOOG -0.08%) (GOOGL -0.16%) Google Glass tried to launch the market six years ago, but the device flopped due to its high price and awkward appearance. Like Facebook, Google partnered with Luxottica to create more stylish frames, but still failed to attract more mainstream users. Google eventually discontinued the original Glass and launched a new version for enterprise users.

Snap's Spectacles had a strong start in late 2016 thanks to a clever marketing campaign with vanishing vending machines. But the hype quickly faded, and Snap took a $40 million writedown on unsold Spectacles the following year. But Snap didn't abandon the device -- it launched a second version last year and a third version this year, albeit in far smaller batches than the original. 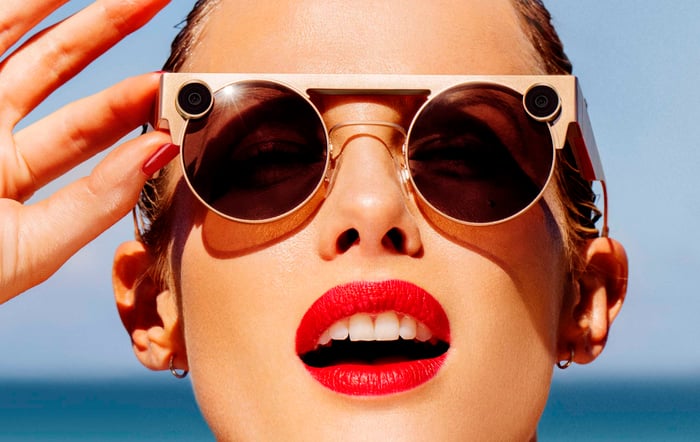 Microsoft launched the first version of HoloLens in 2016 and a second version this year, but with a $3,500 price tag the device remains aimed at developers. Apple reportedly scrapped its AR/VR headset plans earlier this year, but it retains a foothold in AR with its ARKit platform for iOS apps. Microsoft and Apple's cautious moves indicate that AR tech still isn't ready for prime time.

Will Stella and Orion fare any better than their predecessors?

Back in 2017, Facebook CEO Mark Zuckerberg stated that Facebook wanted to develop AR glasses, but didn't have the "science or technology" to build the ideal device yet. In 2018, Facebook confirmed that it was developing an AR device, but stated that there weren't any plans to launch a product yet. At Oculus Connect 5, Michael Abrash -- chief of the Reality Labs unit, which focused on AR and VR projects -- stated that an ideal AR device should weigh less than 70 grams and be "socially acceptable."

Earlier this year, Facebook restructured its Reality Labs unit and officially launched a dedicated group for creating AR glasses. The recent reports about Stella and Orion indicate that the unit finally has a clearer vision of its long-term goals: to expand the company's social platforms (Facebook, Instagram, and WhatsApp) beyond phones and onto faces with Stella, and to eventually challenge high-end AR headsets like HoloLens with Orion.

Yet Facebook doesn't seem as eager to enter the AR market as its tech rivals. That's likely because it wants to focus on the expansion of its virtual reality (VR) ecosystem first with new headsets like the stand-alone Oculus Quest. Research firm SuperData expects Facebook's Quest shipments to hit 1.3 million this year, making it one of the top devices in the nascent market alongside Sony's PSVR.

If Facebook's presence in the VR market continues to grow, it could leverage that lead to expand more aggressively into the AR market with a bigger army of developers. It could also adopt similar commands and controls for its AR and VR platforms to reduce the learning curve for mainstream users. If it patiently waits for components to become smaller and more powerful, it can also launch more attractive devices on the first try instead of wasting money on false starts.

Investors should care about Facebook's AR/VR efforts for three simple reasons: They expand Facebook's ecosystem beyond the saturated markets of PCs and phones, increase the stickiness of that ecosystem with new mixed-reality features, and set the foundations for new revenue streams -- like AR/VR app store sales -- beyond the ads that generated 98% of the company's sales last quarter.

Therefore Stella and Orion could mark the first steps toward building the "next major computing platform" Zuckerberg has repeatedly referenced in internal emails and public interviews. It might not matter much over the next few quarters, but it could make all the difference over the next few decades.