Please ensure Javascript is enabled for purposes of website accessibility
Log In Help Join The Motley Fool
Free Article Join Over 1 Million Premium Members And Get More In-Depth Stock Guidance and Research
By Rick Munarriz – May 20, 2020 at 9:00AM

A fast-growing maker of high-end beanbag chairs and modular furniture has had its ups and downs.

Some models are holding up better than expected in the current environment, and one of the more resilient players in the home furnishings retail space is Lovesac (LOVE 3.00%). The maker of stylish beanbag chairs and modular couch furniture closed its 91 showrooms in mid-March like most brick-and-mortar chains, but then something amazing happened.

In the four weeks following the March 17 closure of its stores, Lovesac saw its online sales soar more than 400%. The fivefold pop in e-commerce was enough to lift total sales 4% in that four-week period, a step down from its previous heady growth clip but a spectacular recovery for what has been the darkest hour for many of its peers.

Lovesac is making the best of the hand that it's been dealt, but is that enough to make it a recommended stock for your portfolio? Let's kick the tires -- uh, the beanbags -- and find out. 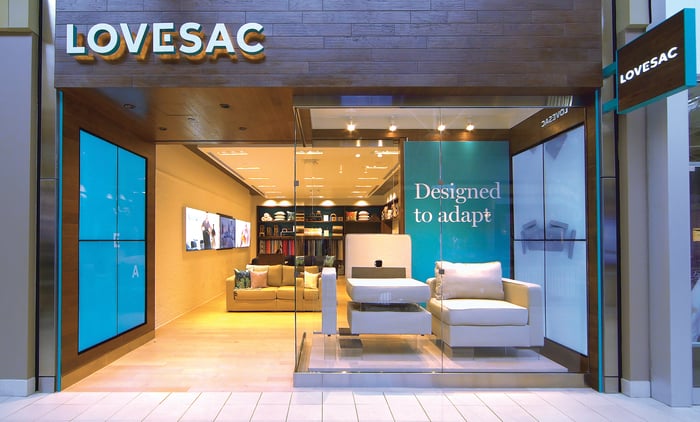 It's been two summers since Lovesac went public at $16, and it's been a volatile investment. Lovesac had a strong freshman year, nearly tripling at last year's springtime peak. It then shed more than 90% of its value, buckling below $4 in early April of this year during the COVID-19 sell-off. Now the stock has more than tripled from that bleak spot, back in the teens where it all began for Lovesac.

The ability to keep its sales growth positive following the shutdown of its showrooms is impressive, but it's not as if Lovesac didn't miss a step in the transition. Net sales soared 44% in the fiscal fourth quarter ending on Feb. 2, lifting the full fiscal year's top line 41% higher. That 4% increase with its stores shuttered suddenly doesn't sound so great, but most retailers would trade places with that kind of performance.

Lovesac's products aren't cheap. Its largest beanbag chairs -- big enough for an entire young family -- crack into the four figures. However, it's easy to see why Lovesac's chairs and its modular "sactionals" are so popular right now. Folks are spending a lot of time at home, and maybe the furniture that seemed just fine two months ago when the shelter-in-place phase of the pandemic started isn't feeling so fresh.

Lovesac's quick coronavirus-triggered turn -- shifting its marketing budget to emphasize online and phone sales -- is paying off, and it's not the only way the company has been nimble. It has been piloting store-in-a-store concepts that fit within department store chains, and it has hosted hundreds of temporary pop-up shops at warehouse clubs. The real-world presence matters given the product's premium pricing, but for now it's comforting to know that the brand and savvy online marketing are strong enough to get through the initial phase of this pandemic.

When it comes to valuation, Lovesac is currently not profitable on a full-year basis. It's turned a profit in the seasonally potent holiday-containing fiscal fourth quarter in each of the past three years, but deficits through the first three fiscal quarters turn the black ink into red ink. However, Lovesac's market cap is actually less than its trailing revenue -- and that's with a strong net cash balance accounting for a fourth of its market cap. Furniture companies trade at low multiples given the historically low margins, but Lovesac's differentiated products and heady growth suggest that it's cheap even after a big bounce off last month's all-time low.

Lovesac will continue to be a volatile small-cap stock. The risks are there, and its high-priced products may be challenged in a weakening economy. However, it's hard to ignore a retailer that managed to keep growing despite having to close all of its showrooms two months ago. Things should only get better now that it's starting to gradually and cautiously restart its real-world business.

Got $100? Buy the Dip on This Beaten-Down Growth Stock