Please ensure Javascript is enabled for purposes of website accessibility
Log In Help Join The Motley Fool
Free Article Join Over 1 Million Premium Members And Get More In-Depth Stock Guidance and Research
By Zhiyuan Sun - May 20, 2020 at 8:41AM

Unlike many other cancer-research companies, CytomX is choosing an unconventional approach: turning tumors' high levels of protein activities against themselves. Will it be successful?

CytomX Therapeutics (CTMX 1.84%) is a small-cap biotech company with four cancer immunotherapy candidates in phase 1/2 clinical trials. The company's technology is based on its Probody therapies, which are infused through the bloodstream and designed to activate high levels of protein-breaking enzymes surrounding tumors to turn the disease against itself.

On May 14, abstracts pertaining to interim clinical data on two of the company's drugs, CX-072 and CX-2009, were published on the American Society of Clinical Oncology's 2020 Virtual Scientific Program. Investors who saw the reports didn't like them that much, and CytomX's share price was slashed by about 25% in a single day. 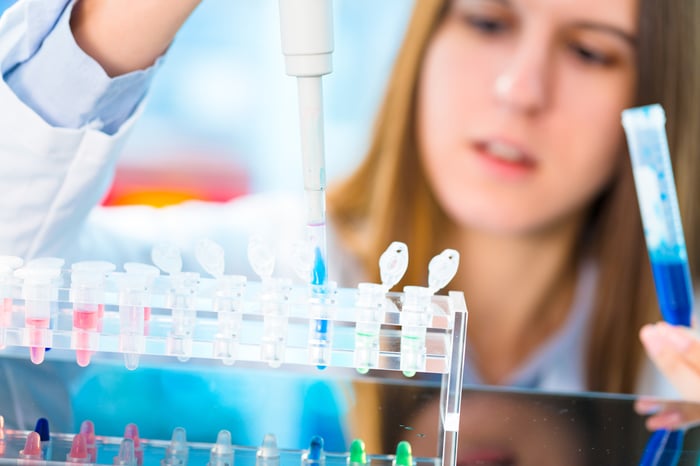 The published data for the CX-072 cohorts involved 141 patients who took CX-072 either on its own (monotherapy) or in combination with Yervoy, another already approved cancer drug. On average, cancer patients enrolled in the trial had received two to four courses of prior therapies. The metric most indicative of potential efficacy in the trial is partial response (PR), which is defined as at least a 30% decrease in tumor diameter after being administered an experimental therapy.

As for the second study, at least 2 out of 92 patients who received at least one prior therapy and were administered CX-2009 demonstrated a confirmed partial response, for a PR rate of at least 2.17%. Throughout the trial, escalating doses of CX-2009 were found to produce a proportionate response in damage to vision in at least three patients. The study began in 2017.

Readers shouldn't be alarmed by the tiny PR rates reported in both trials, as they are, by definition, supposed to be small -- the trials focused on patients with advanced-stage cancer or tumor activity that cannot be targeted. For example, only 9.5% of subjects in Yervoy's trial for patients with advanced-stage melanoma recorded a partial response.

On the other hand, the PR rates of 2.17% and 8.77% in the monotherapy arms of the two trials aren't very good, either. While the rate of serious adverse events in the CX-072 study compares favorably to historical studies, their severity in the CX-2009 study may be a cause for concern. Another limiting factor is that patients were heavily enrolled in prior therapies before the experimental drug started, and residual efficacy from those drugs may have carried over into these two clinical trials.

The data seem to point to a potential therapy that is no better than similar "checkpoint inhibitor" drugs we see today, such as Yervoy and Opdivo. Investors who expected a breakthrough in treating advanced stages of untargetable cancer were right to be disappointed.

Currently, CytomX has ample revenue on its backlog from license, research, development, and commercialization agreements. Last quarter, it recorded about $300 million in deferred revenue due to these ventures, coupled with $49.6 million in recognized revenue. However, the underwhelming data may cause its partners not to renew these research and development agreements. Meanwhile, CytomX's entire enterprise value is only $176 million, considering it has a market cap of $423 million but has more than $247 million in cash and investments.

Overall, I'd argue that investing in CytomX comes down to a matter of taste. For biotech investors with a knack for value who are OK with owning a $176 million company with a mediocre product, the stock isn't a bad pick. But there are plenty of other promising companies in the immuno-oncology field.