The coronavirus pandemic has thrown many companies into unknown territory. But businesses can adapt, and Costco (NASDAQ:COST) and Constellation Brands (NYSE:STZ) are good examples.

Both companies beat most recent estimated earnings and reported sales increases. But one makes a better investment opportunity than the other. Let's examine the companies to find out which one.

Headquartered in Victor, New York, Constellation Brands describes itself as the "fastest-growing, large consumer product goods company in the U.S. at retail." The company produces premium alcohol brands Corona, Modelo, Kim Crawford, SVEDKA Vodka, Meiomi, The Prisoner, and others. After a substantial investment in Canadian cannabis company Canopy Growth, Constellation is working toward being the leader in cannabis-infused beverages and other products. 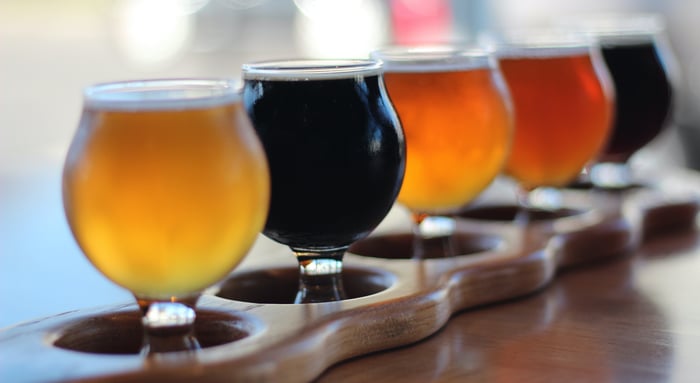 On April 3, Constellation Brands released fiscal-year 2020 results. Revenue grew 2.8% to $8.34 billion, thanks in part to 8% growth in the beer segment, but the wine and spirits segment hurt overall growth with a decline of 6.4%. Excluding Canopy, diluted earnings per share (EPS) increased 6%.

Growth in beer sales is due to strong demand in the Corona and Modelo brands. This was the 10th consecutive year of volume growth in the beer segment. Constellation wants to improve the wine and spirits segment performance by divesting low-margin brands and focusing on the more successful high-end lines.

Constellation Brands seemed to be rolling merrily along.

But a strange twist occurred on April 6. Because of the COVID-19 pandemic, the Mexican government declared beer production as non-essential and mandated closure of the breweries. But somehow, the Constellation Brands breweries producing Modelo and Corona beer in Mexico for sales in the U.S. have continued operations while others have closed, according to a May 5 report from Bloomberg.

"We've had ongoing discussions with the Mexican government and continue to operate in compliance with the law," said Constellation spokesman Michael McGrew in an email response to Bloomberg's questions. Mexican health officials declined to comment about Constellation's ongoing production, and Labor Ministry officials didn't respond to a request for comment, as reported by Bloomberg.

Production concerns remain. Constellation Brands hasn't recently commented on inventory levels, but Bill Kirk of research firm MKM Partners wrote, "[O]ut-of-stock levels will get worse every day for the next 50 days." If inventories get depleted as we head into prime beer-drinking season, Constellation could see its market share slip.

Costco's warehouse-shopping model is more popular than ever

Meanwhile, Costco earlier this month released sales results for the previous 35 weeks. Costco is one of the most dominant warehouse retailers, offering a tremendous range of quality merchandise, heavily discounted for its members. The company currently operates 787 warehouses, including 547 in the United States, with the rest distributed around the planet.

The gain is impressive given the limited services or closures of entire departments due to coronavirus, including food courts, travel, optical, hearing aids, and photo. Additionally, the gasoline segment suffered due to reduced volume and price deflation.

In March, Costco acquired last-mile company Innovel Solutions, which delivers and sets up big and bulky items like appliances. The acquisition boosts the company's online capabilities at just the right time, when home improvement is up but consumers don't want to leave home to shop.

Costco's membership model, which offers members heavily discounted quality merchandise, is working. The company has almost 101 million members, with a renewal rate of 91%. The great deals on merchandise are what attract new members and keep the all-important renewal rate up.

Both Constellation Brands and Costco are surviving COVID-19, but one is a better investment than the other.

Constellation Brands' share price is down 16% year to date and down 22.7% year over year. The company reported fourth-quarter 2020 earnings of $2.06 per share on April 3, beating Wall Street expectations of $1.65. Earnings-growth expectations for the next three to five years stand at 18.5%.

Costco's share price is up 1.8% year to date and up 22.3% year over year. The company reported second-quarter 2020 earnings of $2.10 per share on March 5, beating Wall Street expectations of $2.06. Earnings-growth expectations for the next three to five years stand at 11.8%.

Due to uncertainties caused by the health crisis, neither company is issuing forward guidance, but Costco's trajectory seems more stable.

Constellation Brands is a good company, but at the moment, there's too much uncertainty to choose Constellation over Costco as an investment. The important beer segment supply chain is uncertain, the cannabis-products segment is still a question mark, and certain divestitures in other business segments haven't yet happened. I think all of this has slowed Constellation's momentum.

Costco is performing well and expanding in areas of consumer demand, such as grocery delivery in partnership with Instacart, online ordering in most departments, and delivery and setup of bulky items. With the early introduction of precautions due to COVID-19, consumers feel safe shopping at the warehouse club. Membership renewals are very high, and the company is expanding around the world, attracting new members.

Costco is hitting all the right notes. Between Constellation Brands and Costco, I think Costco is the better buy.