Please ensure Javascript is enabled for purposes of website accessibility
Log In Help Join The Motley Fool
Free Article Join Over 1 Million Premium Members And Get More In-Depth Stock Guidance and Research
By James Brumley - May 21, 2020 at 8:13AM

The meal-kit company saw demand tick higher once the coronavirus hit the U.S., but it wasn't enough to prove the business model works.

In many regards, the company was built for the strange situation the world is now in. People don't want to leave their homes, but they still need to eat. Meal kit service Blue Apron (APRN 3.53%) solves both problems by dropping ready-to-cook foods right at their doorstep. The company acknowledged an increase in demand late in the quarter that ended in March, driven by the advent of COVID-19 in the United States.

The underlying problems that have haunted this company since its inception, however, remain in place -- this business simply doesn't scale. That is to say, growing the operation doesn't drive Blue Apron toward profitability. And, even if the business could eventually achieve an economy of scale, better-armed and better-positioned rivals would ramp up their competitive efforts to keep Blue Apron from stealing market share.

In other words, Blue Apron stock isn't a buy. 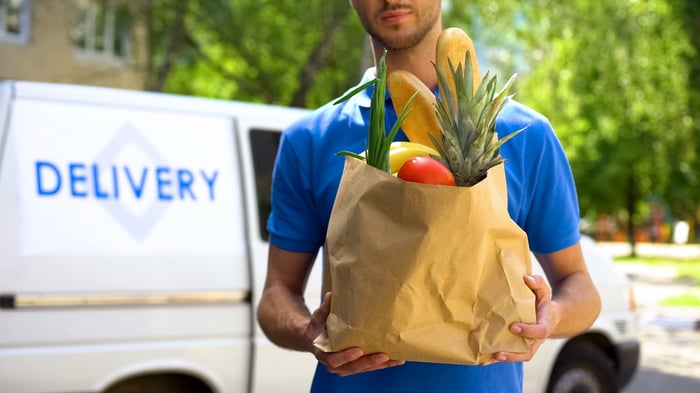 There is no apparent end game

The graphic below tells two important stories about Blue Apron.

First, it illustrates how Blue Apron's revenue appears to have already peaked. People increasingly gave it a try when it was a fresh concept in 2017. But they weren't impressed. Analysts are modeling a resurgence of growth beginning next year, and beefed up marketing efforts were starting to drive a bit of top-line growth during the first quarter of this year even before the coronavirus contagion took hold.

The second story highlighted by the graphical representation of Blue Apron's sales and profits suggests that the bigger the company, the more money it loses. The shrinking net loss between 2017 through 2019 was largely the result of shrinking sales. Losses started to widen again in the third quarter of last year (even without revenue growth) and despite last quarter's revenue growth, the net loss is still sizable. The most recent analyst estimates are modeling EBITDA and net income of around breakeven for the rest of the year. But, given its recent history and lack of explanation as to how the income statement will change in a way that allows that to happen, it's a tough estimate to get behind. 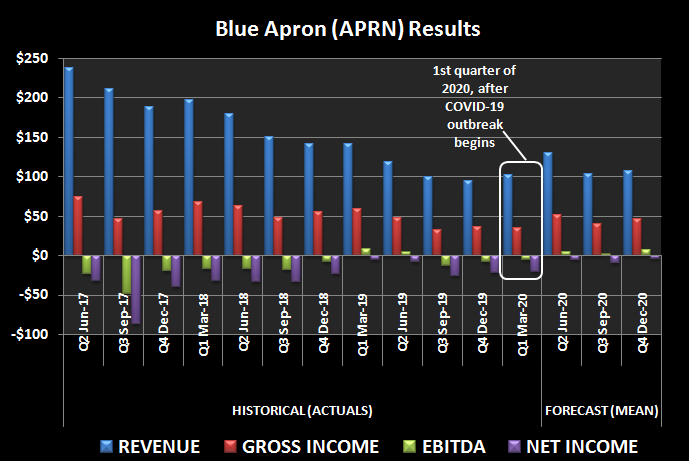 Another way to look at the data above would be normalizing gross income, EBITDA, and net income by looking at the numbers as a percentage of revenue. None of the numbers are getting -- and staying -- relatively better regardless of Blue Apron's size. 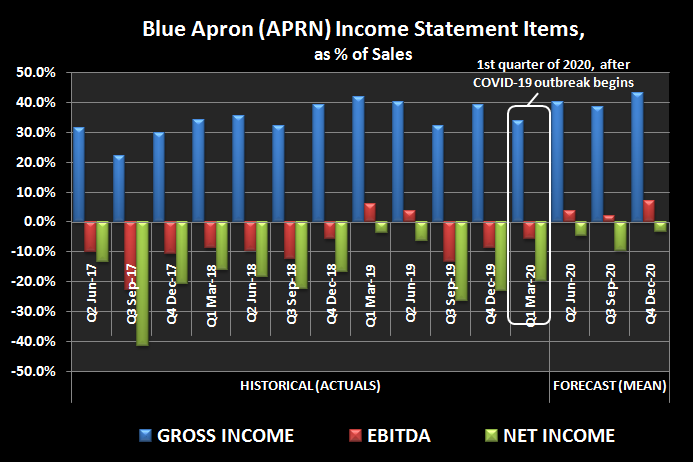 The forward outlook looks healthy, but again, that's a tough analyst outlook to trust in this ever-changing environment.

It's this second takeaway that's the far more concerning one, as it may point to a fatal flaw in the business model itself. Groceries are a low-margin business to begin with. Adding in the cost of packing several different items into one box, delivering that box, and advertising the very premise of that box well enough to steer consumers clear of conventional grocery stores easily, habitually drags the company into the red.

That's not to suggest it would never be possible for Blue Apron or other meal-kit names like Plated and Home Chef to turn a consistent profit. These names may be able to negotiate even better input prices in the future, perhaps farming their own ingredients. Customer acquisition costs can be high, but if Blue Apron can bring enough loyal repeat customers on board, it won't have to spend so heavily to bring newcomers into the fold.

Even then though, there's a not-so-small challenge in front of them. Much bigger names like Kroger (KR 0.60%), Walmart (WMT 1.85%), and Amazon (AMZN 2.07%) are also in the meal kit business. Not only do these giants within the food retailing business already enjoy access to suppliers, but they also already have a huge base of customers coming to them for all sorts of goods. In contrast, Blue Apron has to eventually turn a profit by just selling meal kits, Amazon and Walmart can afford to take a loss on meal kits -- not that they are -- just as a means of attracting shoppers.

And you can bet that if Blue Apron were to ever get and stay in the black, these two retailers would take that as a cue to step up their efforts to do the same and keep the upstart from expanding its footprint.

It was a great idea. Consumers' shopping habits were already shifting even before the COVID-19 pandemic rattled the globe. Even once the outbreak is contained and goes away, many people plan to make fewer trips to grocery stores. A recent survey taken by consumer preference research outfit Shopkick suggested that among people doing more online shopping specifically because of COVID-19, 60% of them would continue to do more online shopping even once the pandemic passes.

That's just not good enough for a stand-alone meal-kit player though. Meal kits are a great add-on for a grocer that's already serving nearby customers, even if those locally made and sold meal kits aren't a profit center in and of themselves. When those kits have to compete with conventional, scaled-up, and localized grocery stores that don't pass along delivery costs to their customers, the hurdle for Blue Apron is just too high.

Remember, this is a company that just a few months ago was looking to sell itself, or at least parts of itself. That's not exactly a sign of confidence in its future. No prospective suitor seemed terribly interested though. Take the hint.