Please ensure Javascript is enabled for purposes of website accessibility
Log In Help Join The Motley Fool
Free Article Join Over 1 Million Premium Members And Get More In-Depth Stock Guidance and Research
By Lawrence Rothman, CFA - May 21, 2020 at 11:40AM

The theme park operator's share price has taken a nosedive. Is this a buying opportunity?

Six Flags Entertainment (SIX 2.00%) stock has been on quite a roller coaster ride since late February, falling from around $40 per share to just $10 before recovering partially to $23 as of this writing.

While that may seem like a bargain, it doesn't mean you should rush out to buy shares in this consumer-discretionary company. There's more to consider before diving into the stock during these unprecedented times. Let's see what drove the the stock's freefall earlier this year and determine if Six Flags actually makes for a wise investment. 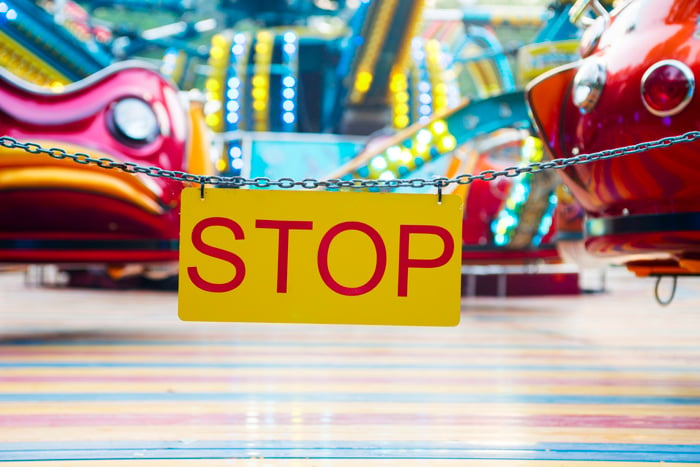 Six Flag stakes its claim as the world's largest regional theme park operator and North America's largest water park operator based on number of parks. With 23 of its 26 properties in the U.S., its operations rely on domestic authorities lifting stay-at-home orders and the economy improving. Of the company's other three theme parks, two are in Mexico and the other in Montreal. So with a limited international presence, it cannot rely on the international business to prop up weak results at home.

Granted, the company's attendance numbers should improve as states begin to reopen. It's just tougher on Six Flags than it is for a company like Walt Disney, which has theme parks all over the world, some of which have already resumed operating on a limited basis.

Getting people into the parks

Six Flags' results, with about 75% of its revenue generated in the second and third quarters, are highly seasonal. This presents serious challenges in the current environment. It also means Six Flags, unlike other businesses, is hard-pressed to make up for lackluster results through the remainder of the year.

Management shut down its parks in mid-March to address the pandemic, hurting first-quarter attendance and revenue. There were 1.6 million guests, down 27% versus the year-ago period. This was the primary driver behind the 20% year-over-year decline in quarterly revenue to $102.5 million.

Attendance and revenue will only worsen in the more important second quarter. While New Jersey's governor has permitted drive-thru events to reopen, this would only apply to the New Jersey park's safari attraction. Meanwhile, management is looking to reopen some of its other parks in different areas of the country, but even if successful, it will be difficult to make up for those lost days.

The company will likely have to limit the number of guests in the park and require reservations once parks reopen. This could have long-term implications since season-pass holders may be put off by the restrictions. After going most of the season without a park visit, many members may also decide to pare back on this expense during the economic downturn.

Six Flags is taking other steps, such as extending season-pass holders' time for lost days or offering an option to pause their membership. While this builds customer goodwill, it will affect next year's results.

The sluggish results are coming as Six Flags adds more debt to its already leveraged balance sheet. The company had $2.3 billion of debt at the end of the first quarter, which doesn't include $725 million of secured notes issued in April.

Six Flags has been prudently cutting expenses, pushing back or deferring capital projects, and suspending its dividend to preserve cash. But having so much debt raises the company's risk profile heading into an economic down-cycle. Everyone hopes the imminent recession, which has already raised the unemployment rate to nearly 15%, ends quickly, but no one knows what the economy will look like a year from now.

With the coronavirus hurting this year's results (and potentially next year's), an uncertain economic outlook, and a lot of debt, I suggest avoiding Six Flags stock, despite the low share price.