Please ensure Javascript is enabled for purposes of website accessibility
Log In Help Join The Motley Fool
Free Article Join Over 1 Million Premium Members And Get More In-Depth Stock Guidance and Research
By Neil Patel - May 21, 2020 at 10:51PM

Why it's a matter of when, not if, the airline industry rebounds.

A history of bankruptcies in the airline industry has usually kept quality-focused investors away. It's no surprise that the capital-intensive, cyclical nature of the business lends itself to wild swings in stock prices during unexpected economic shocks. Southwest Airlines (LUV -2.33%), currently the most valuable U.S. carrier by market capitalization, has seen its stock fall 49% during the last three months as the coronavirus pandemic has essentially halted passenger air travel worldwide.

According to the TSA, air travel demand was down 92% in the first 18 days of May compared to the same time period last year. This broad-based drop has caused Southwest to post a $94 million loss in the quarter ended March 31st, the company's first quarterly loss since Q3 2011. The uncertainty of when things will return to any level of normalcy is seriously jeopardizing Southwest's impressive streak of annual profitability, which reached 47 consecutive years last year. Fiscal year 2020 could very well be the end of that. To make matters worse, CEO Gary Kelly warned of the possibility of "a dramatically smaller airline" if things do not improve. Southwest has never laid off an employee in its entire history. These are truly unprecedented times. 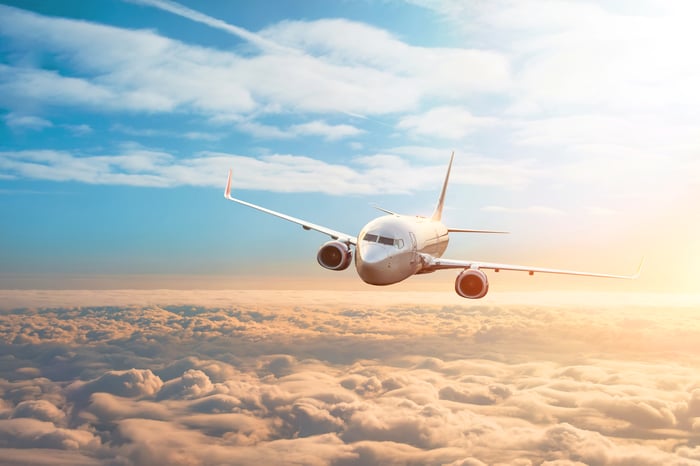 In March, the federal government passed the Coronavirus Aid, Relief, and Economic Security Act (CARES Act) to save the struggling economy. As part of this package, the U.S. airline industry was authorized to receive $25 billion in grants and $25 billion in loans and loan guarantees. Time will tell if the seemingly astronomical dollar amounts will help smooth the recovery. Delta Air Lines (DAL -2.26%) CEO Ed Bastian thinks it will be two or three years until business gets back to pre-coronavirus levels.

During adverse economic scenarios like the one we are currently facing, the issue that always presents itself is whether or not certain industries and companies deserve any government assistance. Known for having massive fixed costs and needing continuous reinvestment to grow, the airline business was characterized best when Warren Buffett once called it a "disaster for capital." Although an investor in airlines since 2016, the Oracle of Omaha has since reversed course after exiting his entire positions in Southwest, Delta, American Airlines (AAL -3.48%), and United Airlines (UAL -3.30%).

As long-term investors, we are focused on owning those rare high-quality businesses. But high-quality can mean something different for everyone. In my view, it's a company that can not only survive tough economic circumstances, but that can actually thrive and come out stronger on the other side. Therefore, it was really a head-scratcher to see Buffett buy airline stocks after years of disowning the industry. Sure, in good times everyone is happy and returns can be favorable. It's times like now that force astute analysts to reassess their investment philosophies and redefine what quality means to them.

After the horrific September 11th, 2001 terrorist attacks, it was unfathomable to think that air travel would ever get back to the way it was before. It wasn't until 2004 that U.S. passenger miles had surpassed levels reached in 2000. As this article suggests, the airline industry will certainly bounce back. It may not even happen when a successful vaccine for the coronavirus is created, but it will happen eventually. As unattractive as they may be from an investing perspective, airlines have done a wonderful job at bringing the world closer together. I have no doubt that this will be the case again.

On Tuesday, Southwest said that new bookings are beginning to outpace cancellations, which could signal a turning point for the company and industry. Reduced capacity, significantly lowered revenue forecasts, and an unknown resolution to the current situation will lead to a turbulent ride for the stock, regardless of how enticing the valuation looks today. Southwest Airlines has had a stellar operating history, but there's just too much uncertainty in the near-term to add the stock to your portfolio.