Please ensure Javascript is enabled for purposes of website accessibility
Log In Help Join The Motley Fool
Free Article Join Over 1 Million Premium Members And Get More In-Depth Stock Guidance and Research
By Rick Munarriz – May 22, 2020 at 10:45AM

A lot of stocks have more than doubled in recent weeks, and a few of them will probably surprise you.

A lot of stocks have bounced back since the coronavirus-fueled sell-off bottomed out between mid-March and early April. However, some stocks have really bounced back over the past two months. Uber Technologies (UBER -2.66%), Royal Caribbean (RCL -5.49%), and Dave & Buster's Entertainment (PLAY -3.42%) are among the hundreds of stocks that have more than doubled.

I'm singling them out because these are stocks that have bounced back despite having more questions than answers at this point. This may not seem like a good thing at first, but there's also a reason they have more than doubled off their recent lows: The pessimism was overdone. Let's break down these three stocks. 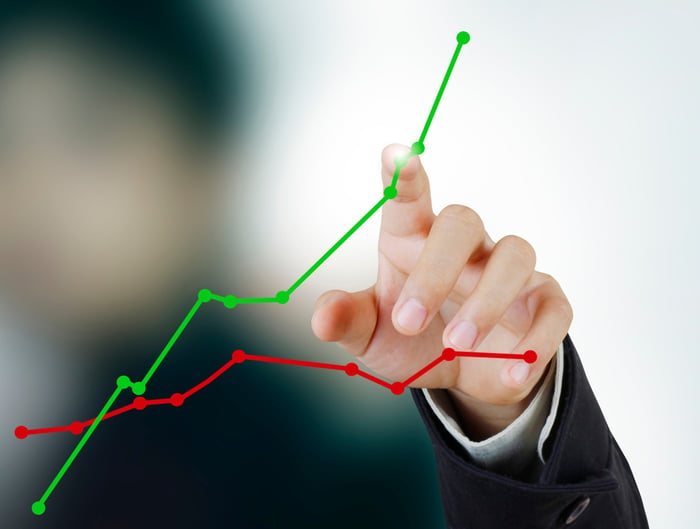 This would seem to be an awful time to be operating a ridesharing platform. Folks are staying home instead of traveling for work, errands, or fun. Hopping into the contained space of a car with a stranger (much less a vehicle that cycles through a few different passengers a day) just sounds like a bad idea. But shares of Uber have soared 150% since bottoming out on March 18.

Uber's namesake ride-hailing segment is naturally getting slammed right now. And things are even worse because its higher-margin UberPool feature, where drivers can combine fares at lower price points for money-saving customers, has been disabled. The saving grace here is Uber Eats. The takeout-delivery option was already growing faster than Uber itself before the pandemic, but business is booming now that folks at home are ordering out after tiring of preparing three meals a day.

Uber also delivered a better-than-expected first quarter earlier this month. Revenue rose 14% for the first three months of the year, with adjusted net revenue checking in with an 18% advance. Naturally, business started to deteriorate during the final few weeks of the quarter, but ridership trends have started to improve as states relax their restrictions.

All three major cruise line operators have bounced up nicely since bottoming out a few weeks ago, but only Royal Caribbean has seen its shares more than double. The stock is up 125% since briefly dipping into the high teens on March 18.

The cruising industry has naturally been slammed. Some of the February and early March sailings proved to be COVID-19 hot spots, given the international melting pot of passengers and the several ports of call on the itineraries. The industry itself isn't bouncing back anytime soon. Future sailings at all three of the publicly traded players have been pushed out to at least August. But the three have each managed to raise billions to get them through the interruption.

Royal Caribbean posted fresh financials earlier this week. The fiscal first quarter was brutal, as expected. Revenue took a 17% hit with a huge adjusted net loss, and naturally the current quarter is going to be even worse.

There were some more-positive nuggets from this week's report. Bookings for 2021 are still within historical ranges at slightly higher price points. More than half of its customers on canceled cruises are opting for future cruise credits instead of refunds.

There are plenty of questions left to answer here, but Royal Caribbean has been a relative winner in its industry given its superior growth and margins versus its peers.

Most brick-and-mortar retail businesses took it on the chin when the pandemic started to escalate in the U.S. Dave & Buster's had to close all 137 of its big-box units on March 20. The one-stop-shopping destinations that offer casual dining, a sports bar, and a massive arcade filled with new and throwback gaming options were already in a funk with comparable-store sales declining 2.6% in its fiscal year that ended in early February.

Things may seem bleak, but the stock has risen 137% since bottoming out on the same March 18 that found Uber and Royal Caribbean hitting their lows. One thing that crushed the stock was the fear that it would go under, but Dave & Buster's would go on to raise additional financing to help push out a potential liquidity crisis. We're also seeing some of its locations start to reopen this month, even if it will be a long time before it becomes business as usual.

Uber, Royal Caribbean, and Dave & Buster's still have a long way to go for their shares to revisit their 52-week highs. They are in problematic industries, and the looming recession isn't helping. But all three stocks have been big winners for those who took the risk of buying when the market sell-off was at its bleakest point in mid-March. Victory can be relative sometimes.