Please ensure Javascript is enabled for purposes of website accessibility
Log In Help Join The Motley Fool
Free Article Join Over 1 Million Premium Members And Get More In-Depth Stock Guidance and Research
By Brian Stoffel – Updated May 22, 2020 at 7:20AM

Government relief efforts for airlines didn't serve passengers, pilots, or the public. Instead, it was this group of people.

If there's one thing more important to a functioning capitalist market than anything else, it's this: the ability to learn from discomfort. That might sound glib, but it's true.

If your lemonade stand isn't selling, you'll need to change something -- your recipe, location, sales tactics -- or simply close up shop. This process has been repeated millions of times over hundreds of years. It's far from perfect, but it's worked better than any other system at scale.

But we appear to have a new normal among American investors (and politicians): the inability to sit with and learn from discomfort. That might sound benign, but it's not. And the 2020 bailout of the airline industry is a textbook example of what I mean.

Let's start with a history lesson. Between 2002 and 2011, there were eight bankruptcies among major airlines in North America. They were:

Go to a major American airport after these bankruptcies and these airlines (or their merged entities) are still taking people from Point A to Point B. Pilots are still flying, airline attendants are still keeping us safe, and ground crews are still working the tarmac.

Yes, there's been some discomfort along the way. Shareholders were wiped out, employees had to renegotiate contracts -- probably at less favorable terms -- and there were sleepless nights. Remember, that level of discomfort is a sign that the system is working.

The bottom line: We know what happens when a major airline files for Chapter 11 bankruptcy protection -- they keep on flying.

Whom are we really saving?

Knowing this is crucial. Why? Because the average American likely thinks that when an airline files for bankruptcy protection, it disappears forever.

If that were the case, it wouldn't be hard to argue for government bailouts. But if we know pilots, stewards, and baggage handlers will keep working so long as there's demand -- bankruptcy or not -- then who really benefits from this coronavirus-related government bailout of the airline industry?

The answer: shareholders and those who decided to lend money to airlines. Not the pilots, not the passengers, not "the public."

Yes, part of the agreement for receiving relief funds was to keep paying airline employees (though United has already announced there will be massive layoffs as soon as possible in October). But if that's the rationale, why not just bail out the employees directly? And why only bail out employees in this particular industry?

There's a huge problem with prioritizing shareholders of a company: They bought the stock for the opportunity to achieve outsize returns -- but only because they were willing to take on outsize risk at the same time. You can't have one without the other. As award-winning former Fool Morgan Housel has pointed out, that risk is the price of admission.

On April 2, U.S. Sen. Richard Durbin (D-Illinois) went on CNBC and said this about the $25 billion bailout of the airline industry: "To say that we're rescuing shareholders -- you know, these stock prices have taken a beating -- I don't think there's any rescue that's come through for shareholders yet."

He is either uninformed or being entirely disingenuous. Yes, it's true airline stocks have fallen -- shares of major U.S. carriers are down at least 50% this year. And yes, it's true that airlines can't squander money on buybacks in quite the same way as before.

But Durbin's missing some simple math here: No matter what the price of a stock, it can always fall 100% from where it is. That shares aren't trading for $0.00 is directly caused by the bailout. And it's helping investors -- none more so than Foolish investing favorite Warren Buffett -- exit their positions in airline stocks without being entirely wiped out.

I'm not necessarily mad at Buffett -- I doubt he asked for this. But think about this: Families across the country are, in effect, writing out a check for Buffett and other shareholders, and they'll see next to nothing in return.

Let's get back to sitting with discomfort for a minute. The reason it's so important that companies actually feel discomfort from the decisions they make is that it generates a feedback loop. Imagine this scenario: 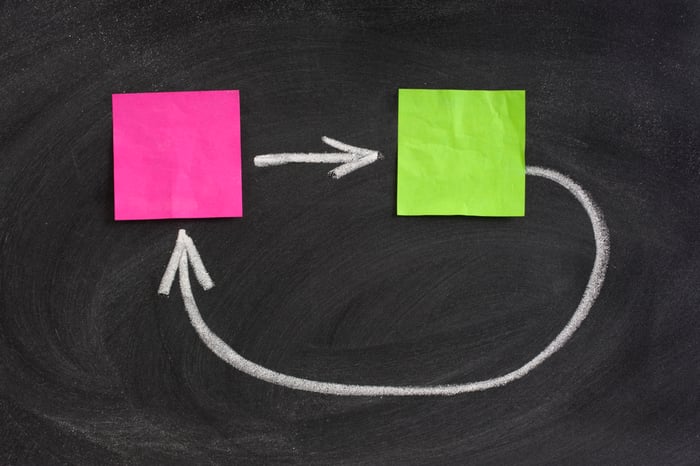 We cannot sustainably have comfort without discomfort -- that's not how feedback loops work. If airlines know that the government will always pay for them to behave a certain way -- spending more on share buybacks to enrich themselves than they take in from free cash flow -- it will happen again.

But this goes far beyond the airlines. Prior to the COVID-19 pandemic, we had record lows in unemployment and a decade-long bull market. Yet whenever there was a hint that interest rates would rise, stock market investors threw a fit.

We can argue about inflation, but the big-picture signal is this: We must be willing to deal with discomfort, in its many forms. Discomfort educates us. It tells us to take our hand off the hot burner. It lets us know what changes need to be made, so we can make them while our problems are small and manageable.

If we don't get comfortable with discomfort soon, the problems we have to tackle will be much tougher to deal with. A poorly run airline industry will be the least of our concerns -- and no one knows what form the other shoe dropping will take.