Please ensure Javascript is enabled for purposes of website accessibility
Log In Help Join The Motley Fool
Free Article Join Over 1 Million Premium Members And Get More In-Depth Stock Guidance and Research
By Rich Smith – May 22, 2020 at 1:45PM

Joe Biden says it's time for Amazon to "start paying their taxes."

In the midst of a global pandemic, online retail giant Amazon.com (AMZN -2.72%) has been deemed an essential service, providing medical gear, cleaning supplies, and shelf-stable food to a country under quarantine. This has been good for Amazon's business, but now presidential candidate and presumptive Democratic nominee Joe Biden wants to make sure Amazon is paying all the taxes it owes on all the new business it is getting.

Biden tore into Amazon in an interview on CNBC this morning, saying: "I don't think any company, I don't give a damn how big they are, the Lord almighty, should absolutely be in a position where they pay no tax and make billions and billions and billions of dollars." It's time, says the former vice president, for Amazon.com to "start paying their taxes." 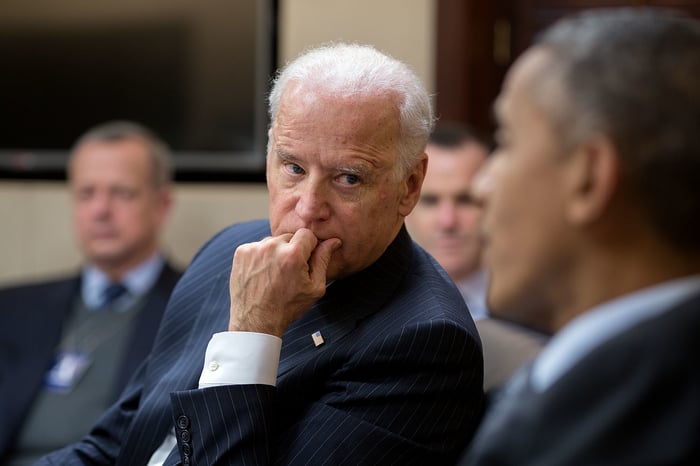 Of course, Amazon says it is in fact paying its taxes -- "every penny we owe," says the company. And to prove that, an Amazon spokesperson points to its January blog post, in which the company explained that it paid:

In fact, says Amazon, last year alone, the company "collected and remitted nearly $9 billion in sales and use taxes to states and localities throughout the U.S."

According to data from S&P Global Market Intelligence, Amazon's reported income tax expense for 2019 was only a little under $2.4 billion (on $14.5 billion in pre-tax earnings) -- but even that's a whole lot more than no tax at all.