Please ensure Javascript is enabled for purposes of website accessibility
Log In Help Join The Motley Fool
Free Article Join Over 1 Million Premium Members And Get More In-Depth Stock Guidance and Research
By Evan Niu, CFA – May 23, 2020 at 2:00PM

But the two companies have different approaches to monetization.

Spotify (SPOT 0.93%) has made no secret of its efforts to dethrone Apple (AAPL -0.66%) in the world of podcasts, scooping up four start-ups over the past year and a half as part of its broader strategy and announcing a major exclusivity deal with Joe Rogan just this week. Considering the sheer size of Rogan's following, the pact has the potential to transform the economics of the podcasting ecosystem, as Spotify is reportedly paying over $100 million as part of the exclusive licensing agreement.

Apple isn't going to sit still while Spotify tries to take a bite out of its podcasting business. 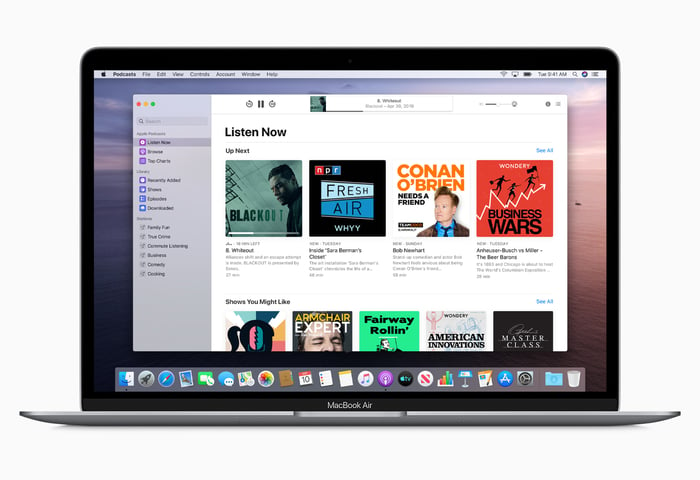 Bloomberg reports that Apple is preparing to boost its investments in original podcast content, purchasing shows that would become exclusive to its platforms. The Mac maker is currently in the market for podcasts related to existing movies and shows on Apple TV+, as well as other series that could potentially be repurposed for video content in the future, according to the report.

The Cupertino tech juggernaut is trying to recruit an executive to lead the initiative. They would report to Apple's podcasting chief, Ben Cave. Funding exclusive originals is a time-tested strategy for streaming services to attract subscribers, and Bloomberg had previously reported last summer that Apple was exploring such a move. Trying to tie podcasts in with Apple TV+ content is a recent twist that could cross-promote the video-streaming service.

While Spotify has been spending lavishly, Apple has yet to open its pocketbook to cut any massive checks. The Swedish paid music streaming leader has already spent an estimated $700 million combined to buy Parcast, Gimlet, Anchor, The Ringer, and The Joe Rogan Experience exclusivity. That's all despite the fact that Apple had $83 billion in net cash at the end of last quarter, compared to the $2 billion in total cash that Spotify had.

Much like in music streaming, Apple is eschewing ads while Spotify is embracing them. Apple is reportedly asking podcast creators to exclude advertisements from shows, while Spotify recently introduced Streaming Ad Insertion technology that dynamically incorporates and targets ads within podcasts.

The news comes as Apple is also reportedly planning to add licensed content to Apple TV+ in an effort to quickly build out the service's catalog, which has consisted entirely of exclusive shows and movies thus far.

The two companies have different approaches to monetization. While podcasts are generally free, Spotify's big push into podcasts has helped boost conversion rates of free users to paid subscribers. Apple's angle appears to be pushing Apple TV+ subscriptions, which it's giving out for free (bundled with hardware purchases) in part due to a dearth of content.