Please ensure Javascript is enabled for purposes of website accessibility
Log In Help Join The Motley Fool
Free Article Join Over 1 Million Premium Members And Get More In-Depth Stock Guidance and Research
By Jeremy Bowman - May 23, 2020 at 10:20AM

The social network is making a big move into e-commerce.

The company has experimented with e-commerce on Instagram for over a year and offers a number of tools for businesses to connect with customers such as chat through Messenger and WhatsApp, but it's never synthesized its apps before into one cohesive shopping experience open to all businesses.

Management had dropped a number of hints on the last earnings call about a new online shopping platform. As COVID-19 forced a number of businesses to close their brick-and-mortar doors, Facebook has set up tools for them to sell gift cards, allowed them to hold fundraisers, and set up a Business Resource Hub to help them with online sales and other needs.

COO Sheryl Sandberg said on the earnings call that 140 million small businesses use Facebook's products, and she noted that one in three businesses in the U.S. didn't even have a website. Many of those use a Facebook or Instagram page as their primary way of connecting with customers online. Allowing them to sell directly on Facebook is a logical next step.

Facebook calls Shops a "mobile-first shopping experience where businesses can easily create an online store on Facebook and Instagram for free." Small businesses can display merchandise and customize their online stores with fonts and colors to sell to customers, using Facebook's tools to chat with shoppers and answer questions.

Facebook has partnered with Shopify and other e-commerce software companies like BigCommerce, WooCommerce, and ChannelAdvisor to help businesses with back-end needs to set up their shops. Right now, Shops are rolling out to businesses using Instagram Shopping and Facebook Page Shop and will soon be available to others. 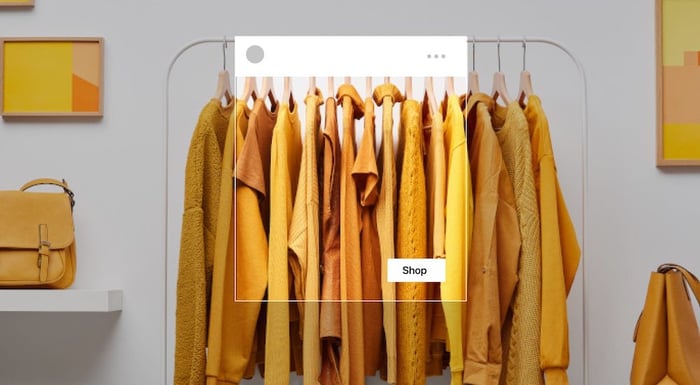 Why it could be huge

As of 2018, Facebook users spent an average of 38 minutes a day on the site, and time spent on its apps has gone up during the coronavirus crisis. That means Facebook has an extraordinary percentage of the world's attention, and adding shopping capabilities is one more way it can monetize its audience. After all, many of its users follow brands on Facebook and Instagram and use the platforms to get new ideas for things like travel, food, or home decor. Companies are eager to find customers, and with billions of users on Facebook and Instagram, it's essential for brands to have a presence there.

Facebook Shops also do something that Amazon, the e-commerce leader, cannot: provide discovery. Amazon works well for shoppers who know what they want but not so much for those looking to be inspired, who only have a sense of what they're looking for, or just want to browse. With its tight relationships with brands and users, Facebook looks perfectly suited to fill this void.

There's a huge opportunity in e-commerce, which has become a giant fast-growing market around the world, especially with the disruption from the pandemic. In the U.S., e-commerce has generated over $600 billion in sales in the last four quarters, and it took an 11.8% share of total retail sales on an adjusted basis, a record percentage. That shows that the e-commerce market is not only massive, it also has a lot of room to grow.

The pandemic has turned a lot of business models on their heads, and it hasn't been particularly kind to Facebook, which generates nearly all of its revenue from advertising. The company said revenue fell in March when the pandemic hit, and then recovered to flat year-over-year growth in April. For a company that was growing revenue by more than 25% before the crisis, that exposes a weakness, and e-commerce is one way to supplement its ad sales and diversify.

Amazon has gone in the opposite direction, leveraging its e-commerce platform to sell ads, but that shows that the two businesses are closely interconnected. Facebook still needs to execute on Shops, and it lacks the logistics prowess of Amazon, but the key pieces of the puzzle -- the customers and the brands -- are already in its pocket.