Please ensure Javascript is enabled for purposes of website accessibility
Log In Help Join The Motley Fool
Free Article Join Over 1 Million Premium Members And Get More In-Depth Stock Guidance and Research
By Jeremy Bowman – May 24, 2020 at 10:08AM

Customers are back at the off-price chain? Will they stick around?

It was no surprise that TJX Companies (TJX 4.01%) delivered a stinker of first-quarter earnings report. The company shut down all of its stores and even its e-commerce site when the pandemic hit in March.

What was surprising, however, was that sales came roaring back as soon as the company reopened stores. TJX, which is the most valuable American apparel retailer, owns TJ Maxx, Marshall's, and Home Goods, and began reopening stores on May 2. It now has over 1,600 stores open globally, and of the 1,100 that have been open for more than a week, sales overall are up from a year ago. CEO Ernie Herrman said:

Although it's still early and the retail environment remains uncertain, we have been encouraged with the very strong sales we have seen with our initial reopenings. We believe this very strong start speaks to our compelling value proposition and the appeal of our treasure-hunt shopping experience, as well as pent-up demand.

That news was enough to drive the stock up 6.8% on Thursday and lift the apparel retail sector with it. With more than 3,000 stores in the U.S., TJX is a bellwether in the apparel industry, a cornerstone of discretionary spending, and is worth watching for investors looking for insight into the economic recovery, as its performance should say a lot about the state of the American consumer. 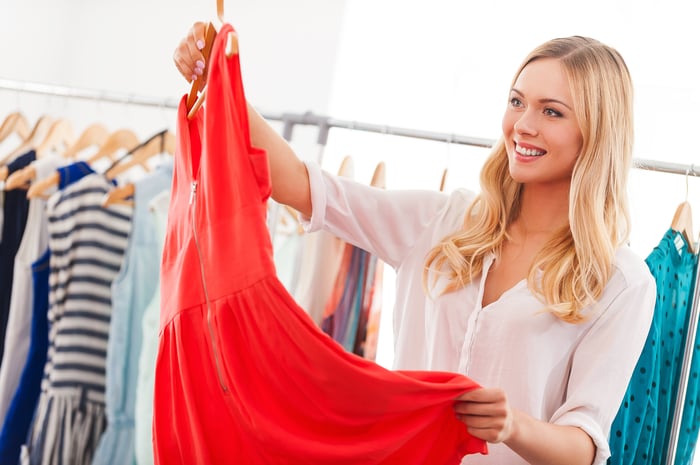 As an off-price retailer at a time like this, TJX has both advantages and disadvantages over other retailers. Its low-price model is a clear advantage. With the economy unraveling and the unemployment rate in double digits, consumers are clearly looking for bargains. However, the TJ Maxx-owner's business model relies on consumers coming into its stores, as nearly all of its sales come from its brick-and-mortar locations. The off-price model has been a winner in recent years because it's difficult to replicate online. During the pandemic, online sales have soared as shoppers are reluctant to visit stores, so TJX's reliance on in-store visits seems like a weakness. Since the company relies on fast turnover of discounted merchandise, it can't easily shift its business to an online model, which would require photographing individual items, and additional shipping and fulfillment costs. Its stores are also high-touch environments as shoppers tend to rifle through clothes hanging on racks, though the strong response since reopening shows that customers, at least the most loyal ones, have no misgivings about coming back to its stores. Pent-up demand, indeed, seems to be a key factor driving the recovery as the company pointed to higher-than-normal basket sizes and strong sales in home goods.

Finally, TJX has a clear advantage on the supply side as the off-price model is designed to take advantage of excess inventory in the supply chain, of which there is an inordinate amount right now. On the earnings call, Hermann said, "The marketplace is loaded with inventory, and I am convinced that we will have access to plenty of high quality branded merchandise to offer consumers the category they want when they shop." Keeping the deals coming for its customers will not be a problem for TJX during this time.

TJX has outperformed the broader retail industry for years, but its advantages are most apparent during difficult economic times as its reputation for discount prices attracts consumers. In 2009, when sales were down more than 5% in the broader clothing category for much of the year,  TJX posted same-store sales growth of 7% at TJ Maxx and Marshall's, the division it calls MarMaxx.

The company expects to have most of its stores open by June, and if the early trend persists, the retailer looks set to be a winner as a combination of low prices, ample inventory on the supply side, the treasure hunt experience, and even pent-up demand all work in its favor, especially as the economy sinks into a recession.

Still, the big question here is if consumers are ready to come back to stores. While the early answer from TJX is yes, investors should keep an eye on the company's performance and customer response as it moves to reopen the rest of its stores.