Please ensure Javascript is enabled for purposes of website accessibility
Log In Help Join The Motley Fool
Free Article Join Over 1 Million Premium Members And Get More In-Depth Stock Guidance and Research
By Nicholas Rossolillo – May 24, 2020 at 7:17AM

Both companies’ online sales surged in the first quarter.

Back in late March, I outlined the reasons why I purchased shares of Walmart (WMT -0.99%) and Target (TGT -0.35%) as the economic lockdown to bring COVID-19 to heel got under way. Both buys have been profitable so far and are beating the S&P 500's performance 2020 to date, and the two companies' first-quarter reports demonstrate why.

Much has changed during the last two months, and migrating to e-commerce will continue to be a top priority for Walmart and Target as they play catch-up to Amazon (AMZN -0.12%). Progress on that front got a shot in the arm due to the coronavirus crisis. However, while both are doing well, I think one is the clearer winner long term. 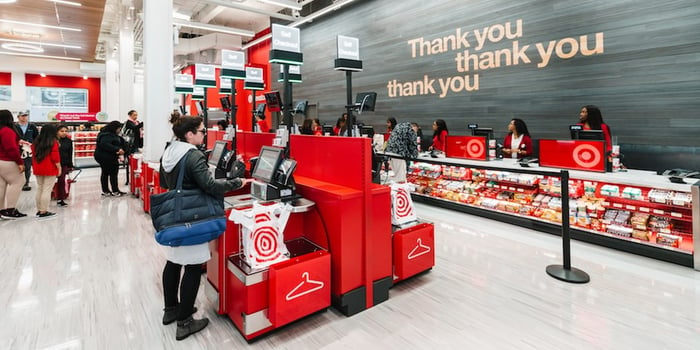 The first quarter (February to April 2020 for Walmart and Target) was a banner moment for both big box stores. Comparable sales (or "comps" from here on out -- a combination of traffic and average purchase size) surged 10% higher at Walmart U.S. and 12% for Sam's Club (the company doesn't provide the metric for its international segment, which accounted for 22% of revenue). For Target, comps increased 10.8%.

In both instances, digital sales were a major factor. Walmart said U.S. e-commerce grew 74% from a year ago, and Target's e-commerce rocketed 141% higher. In fact, Target said nearly all of its total comps growth (9.9 percentage points of it, to be exact) came from digital channels. With total sales increasing 11.3% to $19.6 billion, that would imply Target's e-commerce segment generated somewhere in the ballpark of $2 billion in sales to Walmart's roughly $8.2 billion.

Target may have the smaller digital business base of the two, but it's a fraction of the size of Walmart. The takeaway here is that Target is generating more e-commerce as a percentage of total revenue than Walmart is ($103.9 billion for Walmart U.S. and Sam's Club combined) and is continuing to gain digital commerce market share.

All about profit margin

One of the big challenges in making e-commerce work is shipping and order-fulfillment costs. On this front, Walmart and Target have an advantage as they are able to use their existing real estate as hubs from which to ship, deliver, or schedule order pick-up from (versus an online store that needs to rout everything through a distribution center). However, with higher digital revenue and a shift to lower margin, basic household items expected to conspire against the big box stores, it was assumed that profit margins at both companies would shrink as revenue rose in Q1. That played out as expected.

Clearly, it was Target that suffered the bigger hit to its bottom line from the coronavirus crisis. The extra money spent on fulfilling online orders paired with lower margin merchandise (Target tends to have higher profit margins than Walmart as it derives more sales from its home goods and clothing departments versus basic staples) caused a big decline from a year ago. For profit during periods of crisis and economic recession, Walmart's steady Eddie business wins.

Picking up where department stores leave off

At some unknown point in the future, though, extreme worry over COVID-19 will abate and spending on more discretionary items will return. Target's merchandise mix thus has the most to gain going forward.

However, the fact is Target has adjusted to social distancing and has remained profitable -- at least so far. Recent e-commerce growth rates aren't going to be sustainable, but I don't foresee the gains Walmart and Target have picked up in digital sales reversing course. With its digital infrastructure in place and profitable, a return in consumer spending on items for the home, clothing, and accessories could continue to consolidate with Target and help its bottom line rally in a big way.

I say so because the department store industry (which specializes in home and apparel) has been in secular decline for years, and the recent lockdown isn't helping. J.C. Penney (JCPN.Q) just declared bankruptcy, and Macy's (M 1.33%) is still floundering with its rebound strategy. Meanwhile, Target has been picking up the slack with its own apparel and home-product lines, and a robust online experience won't hurt its chances at scooping up business once consumers feel up to spending again.

Long story short: Walmart is proving once more it is the retailer to be invested in during times of financial crisis. But as the world starts to normalize -- whatever that looks like going forward -- I think Target will be the bigger e-commerce winner.