Please ensure Javascript is enabled for purposes of website accessibility
Log In Help Join The Motley Fool
Free Article Join Over 1 Million Premium Members And Get More In-Depth Stock Guidance and Research
By Stephen Lovely – May 25, 2020 at 7:24AM

The streaming audio platform further expands its podcast empire with the addition of the comedian's popular show.

Spotify (SPOT -3.89%) built its brand in the streaming music space. The subscription service, which also offers a free, ad-supported option, has long been a go-to source for licensed music from artists in all genres. But Spotify's long-term plans don't rely on tunes alone.

For over a year, Spotify has been increasingly interested in another type of audio content: podcasts. There are a number of reasons why podcasts make so much sense for Spotify, including their power to direct advertising and the fact that some competitors, including Apple Music, don't include them (the Cupertino-based tech giant has a separate platform for podcasts). Spotify has even invested in podcast studios of its own in an apparent bid to start creating original content and exclusives in a way that's reminscent of Netflix's original content strategy.

Now, Spotify has landed a major exclusive: Joe Rogan's popular podcast, The Joe Rogan Experience. It cost the company more than $100 million, but that may prove to be money well spent. 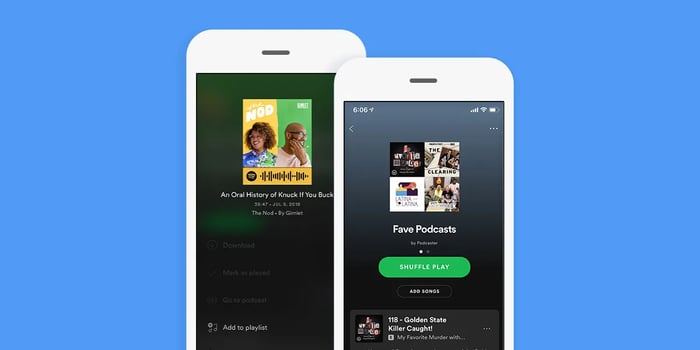 Rogan's podcast is a huge fish for Spotify to land. Podcasts can draw massive audiences, but few have earned as impressive and as dedicated a following as Joe Rogan's show. In fact, by most measures, no other podcast has.

A former comedian, mixed martial arts commentator, and host of Fear Factor, Joe Rogan has built his brand on an omnivorous approach to the counter-culture. He's had apparently open-minded and relatively civil discussions with figures as different as democratic socialist Bernie Sanders and far-right provocateur Candace Owens.

The formula works: Surveys show Rogan to be the best-known podcaster on the planet. The Joe Rogan Experience brings in millions of listeners -- Rogan claims to reach nearly 190 million downloads per month.

Rogan's dedicated base is a perfect fit for Spotify, which wants to bring popular, exclusive podcasts onto its platform. If any podcast audience will pay a subscription fee just to listen to their favorite show, Rogan's audience will. And The Joe Rogan Experience slots in nicely in Spotify's ever-growing lineup alongside Bill Simmons' podcast empire, which Spotify acquired earlier this year.

Rogan's podcast could be a differentiator for Spotify by drawing new fans to the platform. But the bigger part of this deal is the advertising potential. Rogan's listener base is worth at least a few million in advertising sales a month (based on Rogan's self-reported numbers). And Rogan's podcast audience, to the extent that it has been analyzed, seems to be a great demographic fit for advertisers. The coveted younger demographics that advertisers so often strive to reach line up well with Rogan's audience.

In addition to being young, Rogan's audience appears to be overwhelmingly male and predominantly white. GQ Australia called Rogan "the Anderson Cooper for frat boys," a somewhat uncharitable phrasing that reflects a truth about Rogan's best demographics. The Independent sounds just as blunt and a great deal more British as it clarifies that many of Rogan's fans are "blokey men." On YouTube, Rogan does best with young males.

Spotify's ad strategy includes making use of user information to help its ad buyers target their advertisements. Rogan's relatively specific demographic slice could prove valuable to Spotify as it develops more ways to measure and categorize its user base and their habits. In other words, The Joe Rogan Experience offers both valuable ad space with key demographics as well as a chance to learn which Spotify users likely fit said demographics.

It's not all upside. With Joe Rogan, Spotify gains a big star -- but one with baggage.

Rogan is popular, but he is also controversial. Rogan's apparent willingness to speak to just about anyone about just about anything seems to lead disproportionately to discussions with individuals from fringe political groups and adjacent spaces. He doesn't necessarily agree with these people, nor does he necessarily invite his listeners to do so. But bringing attention to these figures may lead listeners to them regardless of how thoroughly their views are disputed on Rogan's program.

A 2018 Data & Society report illustrates how YouTube connections between conservative and counter-culture figures help bridge the gap between mainstream commentary and the ideological fringe. Rebecca Lewis, the author of the Data & Society report, summed up the issue in a conversation with The Guardian after the release of her report: "Really openly racist ideas are getting thrown around as if they are perfectly normal."

And if Rogan is controversial when he doesn't vocally agree with his fringe guests, he's even more so when he does. Some of Rogan's transgressions are relatively old news, and the podcast host has called some of the criticism unfair. But there is certainly no guarantee that Rogan won't say something alarming after his move to Spotify. If and when he does, it will be Spotify's problem to deal with. It will be a fine line, of course: A controversial guest could draw fire to Rogan and Spotify, but it could also drive massive audience engagement and even larger advertising sales.

Tuned in and turned on

Whatever risks and challenges come packaged with Rogan, Spotify must think they're worth it -- and it's easy to see why. Rogan's podcast is simply one of the biggest ones out there, and it could give Spotify a wealth of listeners, paying customers, and useful demographic data. In a business built on music, Rogan's podcast chats could end up being the thing most worth keeping an eye -- or an ear -- on.