Please ensure Javascript is enabled for purposes of website accessibility
Log In Help Join The Motley Fool
Free Article Join Over 1 Million Premium Members And Get More In-Depth Stock Guidance and Research
By Stephen Lovely – May 27, 2020 at 8:52AM

It's no big secret that Amazon (AMZN 4.50%) wants in on the video game industry. Like many of its tech industry peers, Amazon sees an opportunity for big bucks in the changing nature of video games. The free-to-play and games-as-a-service models are keeping revenue streams open long after release, and the arrival of cloud gaming may give companies like Amazon the chance to bypass console giant gatekeepers such as Nintendo, Sony, and Microsoft.

But Amazon's entry into the space isn't being rushed. Only in May 2020 did the company finally release its first big-budget offering, Crucible. And there are still many miles to go on its gaming road map. Here's what you should know about Amazon, Crucible, and what comes next. 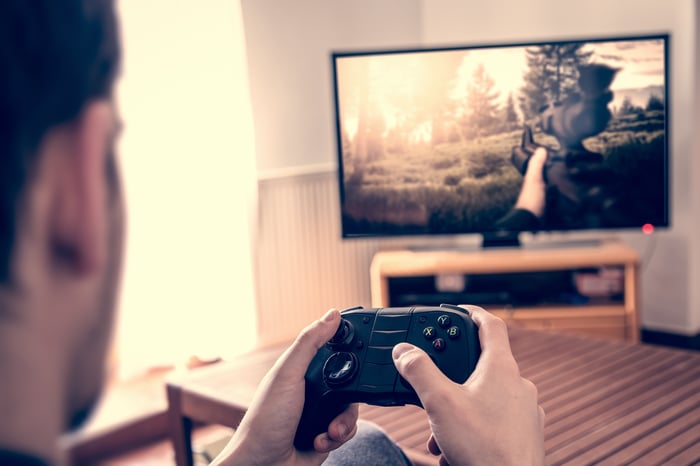 Crucible is the work of Relentless Studios, which is a Seattle-based subsidiary of Amazon Games. Launched on May 20, 2020, it is the first big-budget effort from Amazon's gaming division. There is a technicality to be aware of, though: Amazon has released some minor titles in the past. As far back as 2010, Amazon was making video games like Airport Mania: First Flight, which was developed by a now defunct Amazon-owned studio called Reflexive Entertainment.

But games like Airport Mania -- as well as others like Lucky's Escape, To-Fu Fury, and The Grand Tour Game (based on the Amazon Prime-exclusive series The Grand Tour) -- were small-time efforts designed, in most cases, for casual platforms. Almost all of Amazon's prior games have been published to its own app store. Some have appeared on Alphabet's Android platform, Apple's iOS, and/or Facebook. Only one (The Grand Tour Game) appeared on major consoles, and it was as much a promotional effort as it was a video game (critics would be the first to tell you so).

Crucible, then, is technically not Amazon's gaming debut. It is, however, Amazon's first big-budget title and most significant effort to date.

Crucible is free to play

The company is already embracing the increasingly popular free-to-play model. Such games are, of course, free to play (provided you have something to play them on). They make money in a variety of ways.

One way is to use a free-to-play portion of the video game as a teaser while offering the full version for a price. This is (in part) how Epic Games' mega-hit Fortnite works. The popular title exploded in 2017 when Epic created a free-to-play "Battle Royale" mode modeled on the one offered by successful competitor Player Unknown: Battlegrounds. The huge success of Fortnite's free-to-play Battle Royale mode helped establish the free-to-play model as a more mainstream option for game companies.

Another example is this year's Call of Duty: Warzone from Activision-Blizzard. Players can access the Battle Royale mode for free, but the single-player missions and other modes require a full purchase.

Free-to-play games can also make money through in-game purchases such as a new costume for a character or even items that make the game easier. An offshoot of the loot-and-cosmetics model is the "season pass" mechanic. Typically, this means players with passes can earn prizes on a rewards track based on their performance during each competitive "season." Rankings and other metrics are generally reset in between seasons, and players are asked to once again pony up cash for the following season's pass.

Unlike Fortnite or Call of Duty: Warzone, Crucible won't have a "full game purchase" option. The free-to-play multiplayer part of Crucible is the whole game. But it will sell digital goodies for in-game use, and it will also sell seasonal battle passes.

Crucible is a team multiplayer shooter

Amazon's entry into video games is sure to shake up the industry, but the company doesn't seem intent on shaking up any game design norms. Crucible is pretty easy to describe using comparisons to other established and popular games. It's an online shooter, similar to Fortnite or Call of Duty. Like Activision Blizzard's Overwatch, players are on teams, and the game features a roster of unique playable characters (or "heroes"). The game modes include Battle Royale and something called "Harvester," which works a bit like a spin on "king of the hill," asking players to secure and defend resources against an enemy team.

This isn't to say the game is out of ideas, though. There are a few new elements: The Battle Royale-style mode is smaller in scale than the typical 100- to 150-player norm, and it allows players to form new alliances if their team gets killed off. The Harvester Command mode allows players to use the resources they're defending to level up their heroes, reminiscent of the multiplayer online battle arena (MOBA) genre. That's a bit unusual for a shooter, but even this blend is not a totally new idea: Games such as Battleborn, which was published by Take Two's 2K Games, have mixed elements of the shooter and MOBA genres before.

Crucible's familiar approach is frequently noted by critics, some of whom see the game's elements as derivative. But while being called things like "accessible" may be a mixed blessing in critical reviews, it meshes with what Amazon's strategy appears to have been -- that is, making a safe bet on its first major release (the view of Crucible as a safe play isn't universal -- Engadget, for example, called the game "risky" -- most reviewers seem to have found the concepts pretty unadventurous, whether they liked the game itself or not). 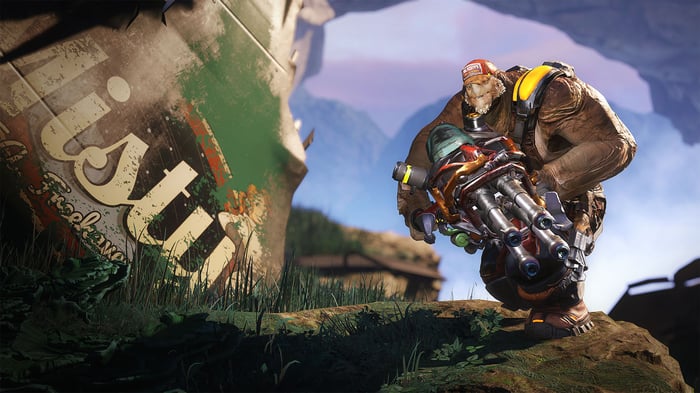 Amazon's cloud gaming future is still just that: its future

Amazon's plans include more than just games. The company is one of several tech giants looking to get into the cloud gaming space. But while Alphabet has already released Stadia and will put games made by its own studios on its cloud-based platform, Amazon is choosing to release its game on Windows computers without yet having a cloud gaming platform on the market.

Why? The timing of the development is the simple answer, but that wouldn't necessarily explain why Amazon green-lit the budget that started that development in the first place. Other factors are likely at play. For one thing, releasing its first gaming effort on a rival's platform helps the tech giant avoid criticism over non-competitive practices. Amazon is not necessarily a favorite of regulators, and entering the video game space with a whole proprietary ecosystem place might not have been the best look.

And there are other benefits too. Launching titles ahead of its entry into cloud gaming helps Amazon build a base of release-day titles for whatever cloud gaming effort is forthcoming, and it helps build the brands of the company's game development studios.

Amazon's first game may not be exclusive to its in-house cloud gaming platform, but that doesn't mean the game lacks tie-ins to the company's broader strategy. One big advantage for Amazon in the video game space is its ownership of Twitch, the most popular game streaming platform.

It's no coincidence that the games Crucible draws its inspiration from -- shooter games such as Fortnite and Apex Legends as well as MOBA games like League of Legends and DOTA 2 -- are some of the most popular titles on Twitch. In fact, Amazon's development team reportedly made a deliberate effort to make the game highly watchable on the platform. That's not a rare mindset these days given the importance of Twitch to gamers -- and its potential from a marketing perspective. It's likely that most game developers are thinking about viewers as well as players, whether they admit it or not. But it's a key part of Amazon's strategy that makes a lot of sense given the company's relationship with Twitch.