Please ensure Javascript is enabled for purposes of website accessibility
Log In Help Join The Motley Fool
Free Article Join Over 1 Million Premium Members And Get More In-Depth Stock Guidance and Research
By Billy Duberstein – May 27, 2020 at 8:21AM

It might seem as if things couldn't get worse for Luckin Coffee (LKNC.Y 0.12%). In early May, after its chief operating officer and other associated employees resigned amid allegations of fabricating meaningful amounts of Luckin's sales, Luckin's stock plunged and was subsequently halted for several weeks. During the trading halt, Luckin's CEO was later fired as well, as apparently a deeper malfeasance was discovered at the company in the meantime.

With the resumption of trading last Wednesday, Luckin's stock has continued to fall, plunging to just $2.13 as of this writing, an amazing decline from its all-time highs of $51.38 set in January of this year.

Luckin still faces the prospect of being delisted from the Nasdaq and will soon have a hearing, probably within the next month, to determine its standing. However, even if Luckin is permitted to maintain its listing on U.S. exchanges, the company still faces some severe questions. In fact, Quo Vadis Capital president John Zolidis thinks Luckin could be a "complete wipe-out" and has questioned if the company ever had a viable business model.

Yet with all of this happening, Luckin can count yet another challenge coming down the pike: new competition from Canada's Tim Hortons, which just received a strategic investment from Chinese tech giant Tencent (TCEHY -0.64%). 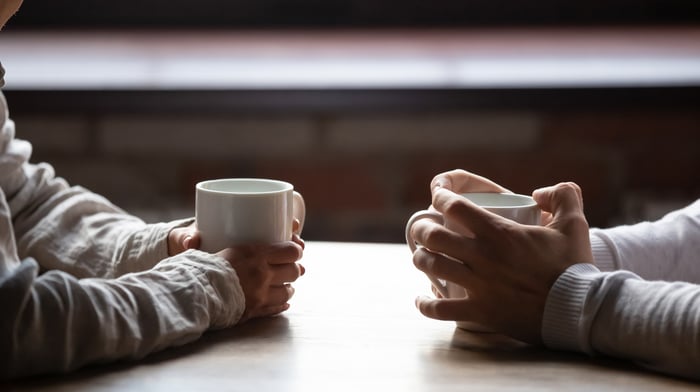 Tencent's got a new coffee fix

Tencent had actually inked a strategic partnership with Luckin a while back, but it's unclear if that was anything other than Tencent collaborating with Luckin on technology and marketing  -- not a strategic investment. Shortly after the Luckin scandal on May 12 -- and perhaps, not coincidentally so -- Tencent made a new strategic investment in Tim Hortons' expansion in China. Tim Hortons is one of the brands owned by restaurant franchise specialist Restaurant Brands (QSR -1.03%), along with Popeyes and Burger King.

Tencent's investment, an undisclosed amount, will actually go not directly to Tim Hortons, but rather to Cartesian Capital, a private equity group that is Tim Hortons' master franchisor in China. Tim Hortons and Cartesian had only teamed up in 2018, with its first store opening in Shanghai in February 2019. Today, Tim Hortons has 50 Chinese stores, with plans to expand to 1,500 within 10 years.

Tencent is certainly a great partner to have in promoting any brand within China. Its WeChat social media app has grown to 1.2 billion users, and WeChat's mini-program ecosystem is a growing, app-store-like ecosystem that allows for retailers to quickly establish omnichannel digital apps all within WeChat. Tencent also owns over 20% of Meituan-Dianping, which dominates the Chinese food delivery space and could also be a strong partner to promote Tim Hortons' brand via its delivery and services super-app.

In a statement, Tim Hortons said, "Today, Cartesian announced that Tencent, one of the largest digital companies in the world, has invested alongside them," adding that the deal will "help ensure the Tim Hortons brand is established as a strong and iconic digital brand."

A plus for Restaurant Brands and another blow to Luckin

As if Luckin didn't have enough troubles, it now has a two strong, established companies in Tim Hortons and Tencent teaming up to capitalize on Luckin's weakness when it's down. While Luckin's stock has been pummeled already, the mid- to long term is still very murky and uncertain, especially since we don't have updated financials as of yet.

On the other hand, the recent partnership could be great news for both Restaurant Brands and Tencent, which may have just added another promising investee company to its already-strong investment portfolio. China, traditionally a nation of tea drinkers, is now discovering coffee more and more, so don't expect this to be the final chapter in the Chinese coffee wars. The battle is just beginning for all the players.