Please ensure Javascript is enabled for purposes of website accessibility
Log In Help Join The Motley Fool
Free Article Join Over 1 Million Premium Members And Get More In-Depth Stock Guidance and Research
By Billy Duberstein - Sep 26, 2018 at 5:49AM

While Alibaba and Starbucks pair up for caffeinated domination, Tencent counters by teaming up with a local unicorn.

Much of the Chinese business community is arranged under a massive duopoly, with e-commerce leader Alibaba (BABA 0.43%) engaged in fierce competition with Tencent (TCEHY 3.61%), the company behind "super app" WeChat. Just about every aspect of China's consumer economy is linked to either these two companies or their minority-owned proxies.

Alibaba just scored a huge win in the e-commerce race, landing an exclusive partnership with Starbucks (SBUX 0.91%). Starbucks was an early entrant in China, having been in the country for nearly 20 years. While China has historically been a tea-drinking culture, that is starting to change. In fact, Starbucks doubled down on China this year, buying out its franchise in the eastern region of the country.

Yet concerns over Starbucks China have grown, with same-store sales shockingly falling 2% last quarter. There seem to be several culprits. One, Starbucks has been behind the curve on coffee delivery, which has taken off due to the proliferation of low-wage couriers. The second reason? Local competitors are springing up fast. 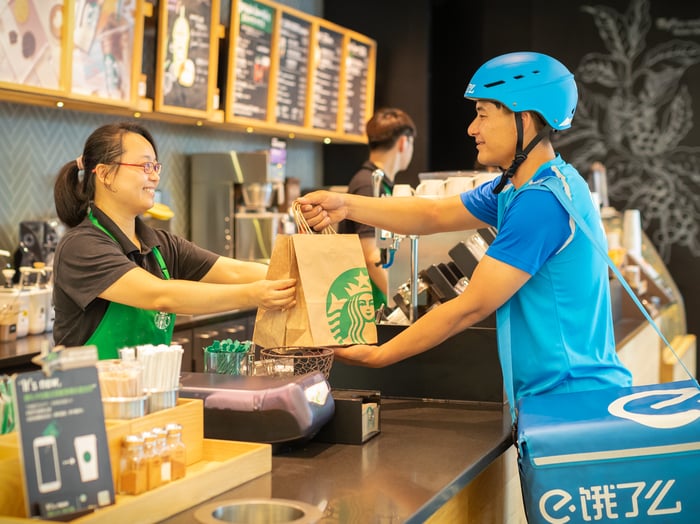 A match made in java

Seeking help from one of the two kingmakers, Starbucks decided on Alibaba, to the chagrin of Tencent.

Starbucks will now partner with Alibaba on coffee delivery and tightly integrate its Starbucks app with Alibaba's online ecosystem. The data-sharing component of the partnership may be just as important as the delivery aspect.

As part of the deal:

Starbucks described the agreement with lofty aspirations: "This innovation will transcend the traditional limitations of a single-app visit by providing the consumer an elevated, and even more personalized Starbucks digital experience across the Starbucks app and Alibaba's customer-facing mobile apps ... effectively extending the reach of the Starbucks Experience into the everyday lifestyle ritual of the Chinese consumer."

While that is a somewhat rosy description, the deal does appear to be a win-win for both companies. While we don't know the financial agreements, Starbucks should benefit from Alibaba's customer data and reach, while Alibaba will get more delivery business and usage of its Alipay payments platform.

Tencent, likely feeling threatened in the new retail race, countered just one month later, striking a partnership with Luckin Coffee. Luckin is a Chinese coffee bakery start-up that has remarkably expanded to over 1,000 stores in less than a year of operations. Luckin sells coffee for about 20%-30% less than Starbucks, and also offers discounts for larger orders. The coffee chain has big ambitions, raising $200 million in July, which it plans to use to expand to 2,000 stores by the end of the year. That means Luckin will have gone from zero to 2,000 locations in just over a year of existence. Considering Starbucks took 19 years to reach 3,000 stores, that pace of openings is staggering.

I'm not exactly sure what the Tencent-Luckin deal entails; Luckin had already made wide use of WeChat to boost its coffee delivery service, and Luckin even has a pop-up store at Tencent's headquarters in Shenzen. The language in the agreement seems to only amount to general statements of "cross marketing," so it will likely be a delivery deal through Tencent's Meituan food delivery subsidiary, as well as a data-sharing agreement among the two companies.

According to Euromonitor International, the average Chinese person only drinks three cups of coffee per year, compared with 363 cups for the average American. Still, that figure seems set to increase in the years ahead. Since Alibaba and Tencent are battling for the hearts and minds of the Chinese consumer, it was only a matter of time that they drew battle lines on the Middle Kingdom's burgeoning coffee culture.