Please ensure Javascript is enabled for purposes of website accessibility
Log In Help Join The Motley Fool
Free Article Join Over 1 Million Premium Members And Get More In-Depth Stock Guidance and Research
By Dave Kovaleski – May 27, 2020 at 7:00AM

It's a great time to buy stock in these companies.

If you're in your 20s and perhaps just starting out as an investor, you may look at the recent market downturn and economic uncertainty and say, "No thanks, I'll wait." But in fact, now is a great time to invest -- for a couple of reasons.

One, you have a long time horizon, so you can wait out any short-term volatility and benefit from the long-term returns that good stocks deliver. Two, the recent downturn has brought down the price of some great companies that will surely reward you with excellent returns over the long term. Here are three of them.

The last time Berkshire Hathaway's (BRK.A -0.22%) (BRK.B -0.28%) stock had a year this bad, it was 2008, and we all know what happened then -- the market tanked during the Great Recession. But over the 10-year period ending last December, Berkshire Hathaway returned about 13% per year, beating the 11% annual return of the S&P 500 over that time.

Through Tuesday's close, the stock was down about 20% in 2020 to around $180 per B share, which is the lowest it's been in almost three years. This makes it a great time to buy into Berkshire Hathaway -- and the guidance of its chairman and CEO, Warren Buffett. 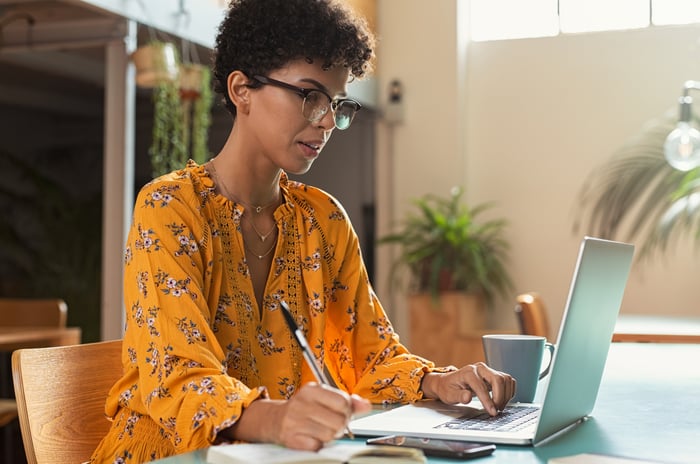 Buffett has been using the downturn to make changes to his portfolio, too. He sold shares of 19 stocks in the first quarter, including large positions in airlines as well as some bank, financial, and energy stocks.

Plus, Buffett is sitting on a mountain of cash. At the end of 2019, the company had $128 billion in cash. Buffett hasn't made a major new acquisition in nearly four years, viewing the market as too overpriced to find a company that would have an immediate and sizable impact on the portfolio. While valuations have come down since the pandemic hit, Buffett is still watching and waiting to find what he might call "a wonderful company at a fair price" as opposed to a "fair company at a wonderful price." As my Foolish colleague Jeremy Bowman stated, Buffett found some of his best investments late in the Great Recession, so he will patiently wait for the right moves. And, over the long run, his track record has been, well, pretty darn good.

Buffett will be 90 this August, but he's still running the company and will continue to do so as long as he can. But he has built more than a company; he has built a culture that will surely endure long into the future.

Walt Disney (DIS -2.60%) has been hard hit by the COVID-19 pandemic as its theme parks have been forced to shut down, its cruise lines have temporarily stopped, and its movies have been held up. As a result, earnings took a huge hit in the most recent quarter, falling 73%.

The stock price has dropped as well, down about 16% on the year to around $121 per share as of Tuesday's close. That's a great entry price for a company with this kind of long-term earnings power. The setback is almost entirely due to the pandemic, so when you look long-term, Disney will continue to be an earnings juggernaut on the other side of this pandemic. The great strength of Disney has been its great diversity of businesses -- from its theme parks to its movies, its cruise lines to its television properties (including ABC and ESPN). These businesses have been dominant franchises in the world of entertainment and should come back strong as the pandemic subsides and demand returns. Over the last five years through 2019, the company has seen profits increase by an average of 8% per year.

And one bright spot during this pandemic has been the emergence of another great revenue stream -- its streaming businesses. This business, which includes Disney+, ESPN+, and Hulu, generated $4.1 billion in revenue last quarter, up from $1.1 billion. The company still had an operating loss on this relatively new business, but it won't be long before it turns profitable.

Just look at the long-term returns. Over the last 10 years, the company has returned 16% annually. Over the past 20 years, and 30 years, it has returned 9.5% annually, on average.

Baozun (BZUN -3.65%) is the leading e-commerce company in China, often compared to a young business more familiar in the West: Shopify. Baozun provides a platform for companies that want to establish an online presence, offering digital storefronts, marketing, fulfillment, customer service, and IT, among other services. Its customers are primarily large companies like Nike, Microsoft, and Philips. Last year, it increased its number of brand partners by 25% annually to 231. Revenue increased 35% last year to about $1 billion.

As my colleague Leo Sun explained, the company makes about 53% of its revenue from merchant services to existing customers and 43% from new product sales. The stock price has been hurt by the pandemic and the U.S. trade war with China, down 17% year to date to around $27.50 per share on Tuesday. But as the leader in this growing e-commerce space in China, with really no major direct competitors, it should be a great long-term investment.

Remember, investing is about the long term, and when you're in your 20s, time is definitely on your side. Riding out short-term volatility surrounding great companies can lead to serious long-term gains.