Please ensure Javascript is enabled for purposes of website accessibility
Log In Help Join The Motley Fool
Free Article Join Over 1 Million Premium Members And Get More In-Depth Stock Guidance and Research
By James Brumley – May 8, 2020 at 10:30AM

The entertainment giant is spending a relative fortune to sell, manage, and create content for its streaming services.

As was largely expected, the coronavirus pandemic took a toll on Walt Disney (DIS -1.32%) last quarter. Although the top line was up more than 20% thanks to a booming cable television business, the closure of its theme parks and hotels as well as movie theaters proved costly. Operating income fell nearly 40% year over year, from $3.8 billion to $2.4 billion. Again, though, nothing about that profit headwind was a surprise.

There was something of a curveball buried in the breakdown of Disney's differing business units, however, for the three-month stretch ending in March. While its streaming service Disney+ has become a fast-growing hit, this business is proving very expensive to run. The company's direct-to-consumer (and international) arm contributed $4.1 billion to the top line, but its operating loss more than doubled year over year.

It's not too soon to start asking where Walt Disney's breakeven point on streaming lies.

Credit has to be given where it's due. Disney made a big splash in an on-demand world dominated by Netflix (NFLX -2.15%). Since launching Disney+ in November, the company has amassed at least 50 million paying customers for the service. Its ESPN+ launched in 2018 and still boasts only 7.9 million subscribers. Hulu has been around for years, but Disney reports it's got only 32.1 million customers, 28.8 million of whom watch only its on-demand content; the other 3.3 million also view its live TV programming.

Given the average monthly price paid per service, subscription fees alone are now driving about half of this unit's sales. The other half, more or less, comes from affiliate fees and advertising related to international television channels like Star and Disney's Twenty-First Century Fox property.

Whatever Disney is doing to power this business unit forward, however, it's costing a relative fortune. In the same quarter that this division collected $4.1 billion worth of revenue, the company also spent more than $3.7 billion on operating expenses and more than another $1.0 billion selling and simply managing the business. Net result? An $812 million operating loss that extends an ugly trend.

If this reflects the unit's current cost norms -- and it likely does, given the trend -- Walt Disney may want to think more critically about the plausible future balance between revenue and expenses. As it stands right now, there's little point in expanding the business. 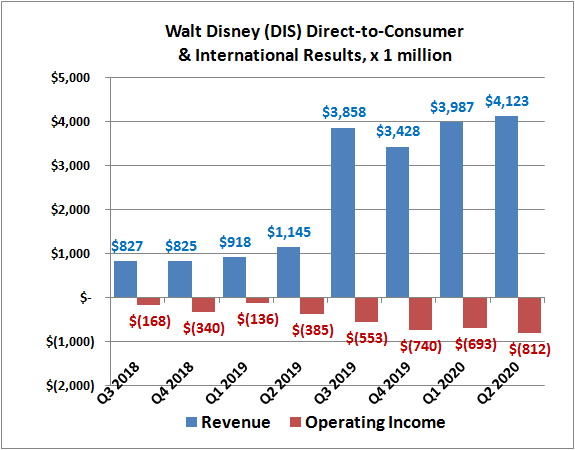 Of course, where things stand right now isn't where they'll stand a year from now. These streaming services (Disney+ in particular) are still growing. In a business that's about scale, more paying customers should eventually offset those big cost increases. A movie or television program only has to be paid for once, but it can be sold over and over again to as many customers as are willing to pay for it.

But there's a flip side to that coin. A great deal of the content available through Disney+ has already aired on cable television or in movie theaters, and while the streaming arm "pays" the media and movie arms for access to content, one has to assume those prices reflect a friends-and-family sort of discount.

Hulu enjoys a similar situation. While it offers a few originals, much of its on-demand content comes from ABC and Fox, which Walt Disney also owns. The company's direct-to-consumer content costs should be relatively modest. So far they don't seem to be.

It's still the early innings of this game, to be fair. Last quarter was the first full quarter for which Disney+ was in operation, and it was an unusual one to say the least. The impact of the coronavirus pandemic is difficult to measure, and Walt Disney is still trying to build the aforementioned scale it needs to make Disney+ viable. That requires advertising. The media giant is also still likely closer to the beginning of its learning curve than the end in terms of cost-effectively managing the technology needed to digitally distribute this much video content.

It's also worth noting the Disney+ price point of $6.99 per month isn't etched in stone. Netflix made tempered price hikes, and Disney+ likely will too. That will offset more of the operating and administrative spending.

Nevertheless, this is a cause for concern, if only because the company seems intent on holding off on any price increase for as long as possible. Then-CEO Big Iger commented during the earnings call in February, "We really are not focused right now on price at all. We believed all along that we would have an opportunity to address pricing as we added more content, particularly original content, and the price-value relationship went up to the consumer, but it's not a priority of ours right now because we're still very new at this."

And as for content costs, prospective numbers are being tossed around and they're not small. Disney said last year that Disney+ would kick off with $1 billion worth of original content, but that figure would grow to around $2 billion per year by 2024. Licensed content costs for Disney+ were around $1.5 billion per year at launch, but Disney expected that spending to swell to around $2.5 billion by 2024 as well. For perspective, Netflix had planned to spend on the order of $15 billion on content this year to keep its 183 million subscribers satisfied.

And that's just Disney+. There are still operating and content costs related to streaming services Hulu and ESPN+.

It all puts a lot of pressure on Walt Disney's pricing power with Disney+, which has yet to be truly tested. Investors may want to brace for the fact that streaming is apt to be a profit drag for a while, even if it is worth it in the long run.