Please ensure Javascript is enabled for purposes of website accessibility
Log In Help Join The Motley Fool
Free Article Join Over 1 Million Premium Members And Get More In-Depth Stock Guidance and Research
By Anne Burdakin – May 27, 2020 at 8:35AM

Will slimmed down product lines attract investors to the company?

Newell Brands (NWL -1.22%), the maker of a wide range of consumer products, has been struggling to regain its footing after the 2016 acquisition of Jarden, a $15.4 billion cash-and-stock transaction. The Jarden deal added the disparate product lines of Ball, Rawlings, Mr. Coffee, Stearns, Coleman, and many others to Newell's existing offerings, straining resources. The deal increased debt and sent profitability downward.

Since then, the company has taken an honest look at the situation and is implementing steps to improve operations and the financial picture. Most recently, the company is focused on reducing the resultant heavy debt load and streamlining product offerings to get rid of dead weight.

Management's discipline helps to chip away at debt

First-quarter 2020 earnings were released May 1, and management discussed some of the pandemic's effects on the business. The company said the results were a mix of positives and negatives due to shifts in consumer shopping, but they are watching and learning in order to respond to the new environment.

Through February, the company was reportedly ahead of plan on key financial metrics, but as stay-at-home orders took effect in March, business began to slide in some channels and pick up in others. These changing dynamics were further complicated by supply chain issues as COVID-19 spread throughout the globe. 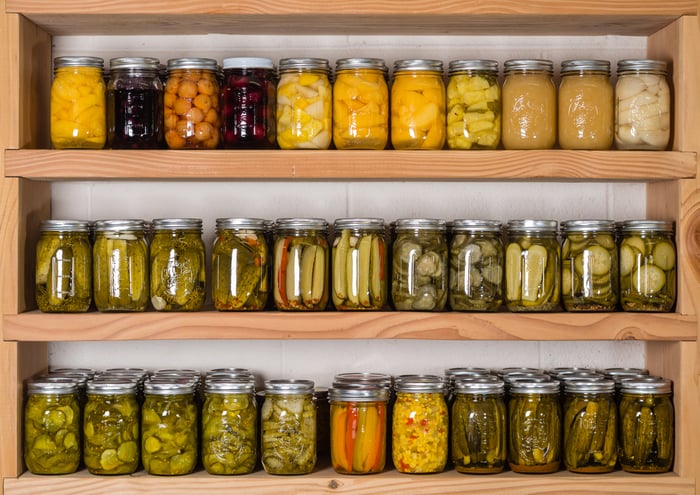 Supply chain issues prompted the company to speed up streamlining product lines to reduce complexity. In the first quarter, Newell eliminated 5%, or about 4,000, SKUs from the system. From the 2018 starting point of this effort, SKUs are down about 31% to less than 70,000, and production is focused on offerings with the highest demand.

Net sales for the quarter declined 7.6% year over year to $1.9 billion. Newell's largest mass retail and online channels saw a surge in sales, especially in categories that support stay-at-home consumer use, such as Ball Fresh Preserving, FoodSaver Vacuum Sealing bags, and Rubbermaid food storage. But larger, offsetting declines were seen in the outdoor & recreation, home security, and baby categories.

The shift to e-commerce during COVID-19 has been significant. Newell Brands' global e-commerce penetration went up from 13% in the first-quarter of 2019 to 17% in the latest period. The company has every intention of building on those gains, hiring Chief Customer Officer Mike Hayes, an experienced omnichannel sales and marketing executive.

Nonetheless, April's results point to slowing sales in the second quarter as revenue fell approximately 25% last month, but trends should improve later in the year with reopened schools, businesses, and manufacturing leading to an improved second half of 2020.

Debt reduction over the last 12 months is helping the financial picture, having reduced the company's net interest expense by $17 million versus last year. And improving cash flow has been a serious focal point for Newell. In the first quarter, the company recorded positive operating cash flow of $23 million, representing a $223 million improvement year over year. "This represents a 27-day improvement to the company's cash conversion cycle compared to a year ago and is the first time in a decade the company delivered positive operating cash flow in the first quarter," said CFO Chris Peterson.

In an unpredictable period, Newell managed to strengthen its liquidity position, increasing its cash balance to $476 million. Additionally, the company has a revolving credit facility of $1.2 billion, from which the company has preemptively drawn $125 million in the early second quarter, leaving remaining capacity of $1.1 billion. Management is confident the company is in a strong liquidity position and has sufficient flexibility to guide Newell through the unprecedented environment.

Is this the right entry point for investors?

Newell Brands dug itself into a bit of a hole with the Jarden acquisition and is taking a slow-but-steady approach to digging out. But investors must consider whether things could improve more quickly if the company cut or suspended its generous 7.2% dividend. In 2019, Newell paid out $390 million in dividends, in addition to over $300 million in interest payments. Long-term investors would benefit in the long run if debt retirement was more of a priority, though some would no doubt flee the stock in the short run if the dividend was cut.

While the current progress in Newell's turnaround plan is encouraging, even in the face of a major health crisis, the timeline to success remains uncertain. The company is benefiting from disciplined management, but investors should keep this stock on their watchlists until Newell reports a stronger balance sheet and begins recovering sales in all channels. Investing now seems premature.