Please ensure Javascript is enabled for purposes of website accessibility
Log In Help Join The Motley Fool
Free Article Join Over 1 Million Premium Members And Get More In-Depth Stock Guidance and Research
By John Rosevear – May 27, 2020 at 3:15PM

A day ahead of earnings, investors are bidding up shares.

Shares of upscale retailer Nordstrom (JWN -1.18%) were sharply higher on Wednesday afternoon, a day ahead of the company's quarterly earnings report, amid a broad-based market rally driven by rising optimism about the post-pandemic economy.

Nordstrom was one of several brick-and-mortar retailers trading higher on Wednesday amid signs that the White House and Congress may be moving toward agreement on additional measures to bolster the U.S. economy. Stocks in other sectors hit hard by the effects of the coronavirus pandemic -- airlines and travel stocks, for instance -- were also up on Wednesday. 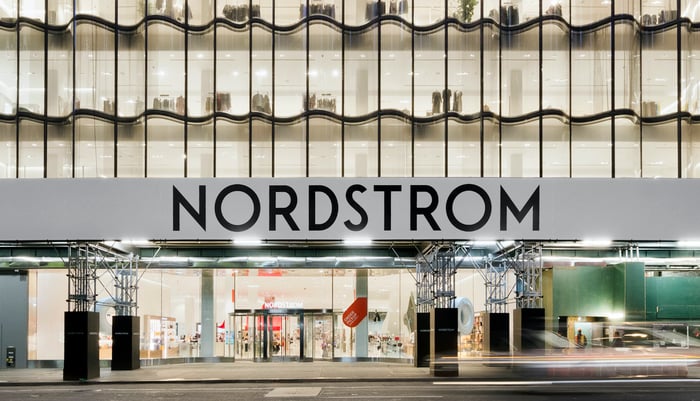 Nordstrom is set to report earnings for the quarter that ended on May 2 after the market closes tomorrow. Wall Street analysts polled by Thomson Reuters expect Nordstrom to post a loss of $0.95 per share on revenue of $2.41 billion.

Both would be down sharply from a year ago when Nordstrom reported a profit of $0.23 per share on revenue of $3.44 billion. But given that Nordstrom's brick-and-mortar stores in the U.S. and Canada were closed for much of the quarter, steep year-over-year declines on the top and bottom lines are to be expected.

If there's an upside surprise when Nordstrom reports, I'd expect it to be around the company's online sales. CEO Erik Nordstrom said in April that the company's well-developed online storefronts were doing well under the circumstances and were able to fulfill online orders from its shuttered stores.

While online sales gains are unlikely to come close to offsetting sales lost while stores were closed, they might come in better than analysts expect. We'll find out tomorrow afternoon.