Please ensure Javascript is enabled for purposes of website accessibility
Log In Help Join The Motley Fool
Free Article Join Over 1 Million Premium Members And Get More In-Depth Stock Guidance and Research
By Jeremy Bowman – May 27, 2020 at 3:42PM

Shares of the athletic apparel brand gained on a broader rebound in the sector.

Shares of Under Armour (UA -2.06%) (UAA -1.93%) were gaining today for the second day in a row as the sportswear brand continued to climb on hopes for an economic recovery. Investors were also rotating out of high-priced growth stocks and into cheap cyclical stocks like Under Armour that have been hit hard by the pandemic.

Under Armour finished the day up 8.2% as the retail sector rallied broadly. 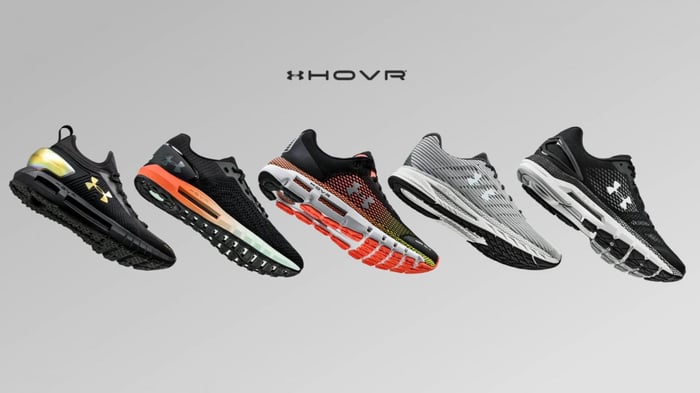 There was no specific news out on Under Armour today, but it was one of several apparel brands gaining today as investors spied value in a sector that has sold off sharply during the pandemic.

Investors have been encouraged lately by news that shows the economy may be recovering faster than expected as a closely watched consumer confidence reading was higher than expected yesterday, the housing market is showing resilience, and hopes are escalating that a COVID-19 vaccine will be available by next year.

Meanwhile, other retailers have pointed to better-than-expected customer traffic when they've reopened stores. TJ Maxx parent TJX Companies said sales were up year-over-year at stores that have reopened, which it attributed to pent-up demand, while Macy's said sales it at reopened stores were moderately better than expected.

Under Armour management said in its May 11 earnings report that it had opened a few stores. CEO Patrik Frisk said he expected the reopening to be gradual, and that some stores could even be forced to close again.

The company also forecast sales to be down 50% to 60% in the second quarter due to the closures, but investors seem willing to ignore that if the company is optimistic about the future.

Under Armour was already facing challenges before the pandemic struck, as sales had been declining in North America, its home market, so reopening alone won't solve its problems. The stock is still down 40% from pre-crisis levels so it could have a lot more room to run if investors believe in a V-shaped recovery.