On May 22, the Food and Drug Administration announced approval of Evofem Biosciences' (NASDAQ: EVFM) novel contraceptive gel Phexxi. This was a very big deal for a company that has no products on the market and has been operating at a loss since its IPO in 2014. After markets closed on Friday, shares traded up to about $8 on the news, bringing Evofem's market cap to almost $400 million. However, as of May 27, shares are back down near $6.

Currently, about 65% of women ages 15 to 49 in the U.S. reported using some form of contraception in the month they were interviewed by the Centers for Disease Control and Prevention, which is a gigantic opportunity for the company to tackle. Let's take a look at what Phexxi is and how it can generate sales for Evofem, and in turn, make shareholders rich. 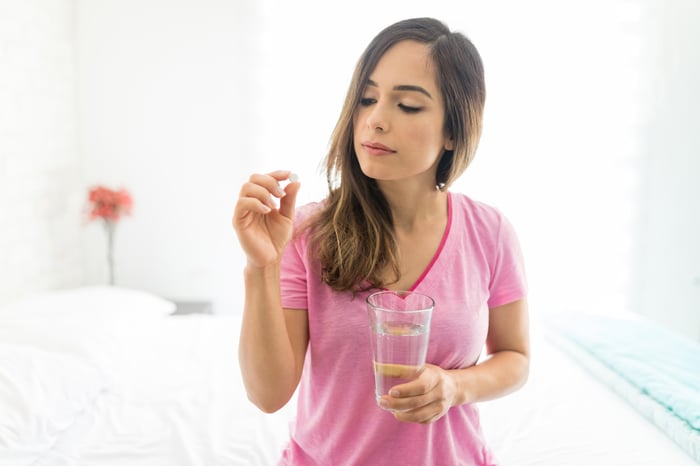 What is Phexxi and how does it work?

Phexxi is a prescription gel composed of citric acid (found in lemon juice), lactic acid (found in milk), and potassium bitartrate (known in cooking as cream of tartar) that is inserted into the vagina shortly before intercourse to prevent pregnancy. After use, the compound maintains pH inside the vagina to between 3.5 to 4.5, which is too inhospitable for sperm to survive.

In clinical studies, 91.46% of women who took Phexxi on a typical use basis (where human errors such as forgetting can occur, as opposed to perfect use, where patients use contraceptives correctly all of the time) reported no on-treatment pregnancies. The cumulative pregnancy rate over seven menstrual cycles of subjects who took Phexxi was 13.7%, or an 86.3% chance of no pregnancy.

When looking at efficacy alone, that is, completely disregarding how a type of contraceptive can affect a person's quality of life, then Phexxi does not compare favorably to birth control pills, which have are 91% effective on a typical use basis and cost $10 per month.

However, birth control pills, being hormonal therapies, can seriously affect patients' quality of life with side effects such as mood changes, weight gain, and migraine headaches. No patients who took Phexxi reported such adverse events in clinical studies. The most common adverse event reported was a burning sensation (18%), and only 0.36% of subjects reported serious adverse events like urinary tract infections or cystitis.

Evofem recognizes it will be very difficult to get its products to patients right now, given the ongoing COVID-19 pandemic, and has developed an action plan accordingly. The company now has 125 sales consultants and has developed a system whereby prospective patients can connect with a nurse online for information regarding the product and for pharmacy delivery. The compound costs about $270 for a 12-pack, or $54 with a 20% insurance co-pay.

Is the stock a good buy?

Recently, the company received a $15 million investment from an institutional healthcare-focused investor, with the option to receive another $10 million in the future based on certain milestones. Meanwhile, the company's current cash and equivalents and short-term investments amounted to $10.3 million, and the company expects its expenses will amount to between $13 million to $15 million in the current quarter as it gets ready for Phexxi's launch.

Given its burn rate and current liquidity, I expect the company to announce an equity offering to fund future commercialization expenses. This is actually good news for investors, because a key pillar of long-term share appreciation is a company's ability to bring its drug to market, which cannot be done without sufficient funding. With the FDA approval in hand, the company can now convince additional institutional investors of its potential.

Grand View Research estimates the total addressable market for all forms of contraceptives in men and women in the U.S. stood at $7 billion last year. In all, I think Evofem's prescription gel will be able to find its own niche in this competitive field and deliver good results for investors as the treatment enters commercialization in September. This is a stock small-cap healthcare investors with a high tolerance for risk will not want to miss.