The meatpacking giant's struggle with the coronavirus pandemic highlights the future of ethically sourced meat and plant-based meat replacements.

Let's cut to the point: Tyson Foods (TSN -1.22%) is a sinking ship that should be avoided.

The latest chapter in Tyson's series of unfortunate events involves the company being at the barrel-end of a federal wrongful death lawsuit brought by the family of a recently deceased meatpacking worker who died from complications caused by COVID-19. 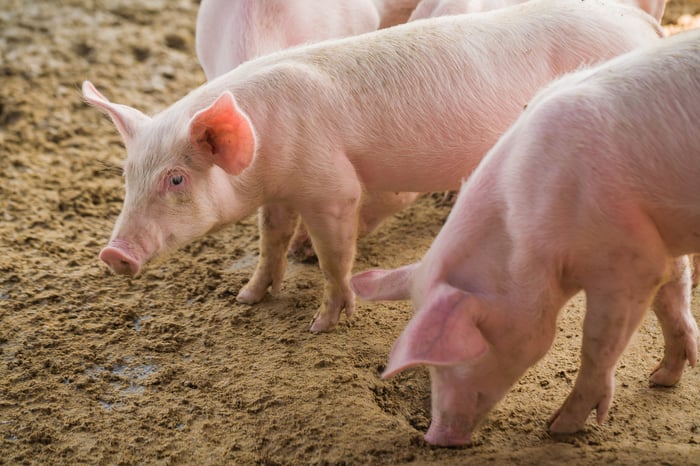 This legal complaint filed against Tyson doesn't come as a shock. The coronavirus pandemic has flipped the U.S. meatpacking industry on its head.

Dozens of meatpacking workers across the industry have died from COVID-19, due in large part to close quarters, unsanitary working conditions, and precautionary measures implemented too late.

A May 22 update from the Food & Environment Reporting Network notes that at least 72 people (66 meatpacking workers and six food-processing workers) have died in the line of work.

The attorneys in the wrongful death lawsuit against Tyson call the company negligent in the death of meat cutter Pwar Gay. The lawsuit said Gay worked at the company's plant in Amarillo, TX, where she injured her knee after falling on the job.

Gay was treated at the company's clinic for basic first aid triage and returned to work soon after. Unfortunately, she fell ill with complications breathing and was admitted to a hospital where she tested positive for the coronavirus disease and died May 8. The federal lawsuit alleges Tyson failed to provide Gay and other employees with the necessary personal protective equipment (PPE). Now, Gay's estate, including her family, wants to hold Tyson responsible.

Is Tyson liable for the deaths of its workers?

Though a single lawsuit, it should serve as a warning of what could come. Over 4,500 Tyson Foods workers have tested positive for COVID-19. And 18 including Gay, have died due to complications from their exposure at Tyson plants.

Since the numbers are so alarming and continually growing at the moment, investors need to realize that an investment into a company like Tyson could be a costly -- and conceivably unethical -- decision.

The meatpacking industry as a whole has experienced rapid infection rates with several virus hot spots centering around communities that have meatpacking facilities in town or nearby -- facilities which may be the largest employer for many small and medium-sized towns.

A new threat to national security?

Tyson should admit some sort of accountability because of their inaction, or lack thereof, to provide actionable worker protection plans.

Especially with a mandate to keep operations going from the Trump administration, the spread of the virus in meatpacking facilities actually shifts the threat on national security to the health and well-being of workers who are tirelessly working to shrink the country's current meat shortage.

Some investors can accept legal issues and impacts on share prices as a side effect of investing in the long term.  However, the news of the wrongful death and the continued controversy tied to Tyson and this industry paints a bleak picture for the future.

This is why there needs to be a consideration for other alternatives to traditional meatpacking. Tyson, including other industry players and competitors, currently lacks the trust of the public.

Beyond Meat offers alternative to meat and meatpacking stocks

Beyond Meat (BYND 0.75%) recently went public to raise funds to ramp up manufacturing operations. The vegan meat-substitute producer reached a $3.8 billion market value as the actual stock exceeds the initial IPO share price of $25 by 192%.

With such a strong start and a lot of enthusiasm behind the stock, Beyond could be one of the answers to the various struggles of the meatpacking industry currently sweeping across the country.

Though Beyond only controls a niche segment, the alternatives to traditional institutions like Tyson Foods should draw the attention of investors who are looking for more sustainable and ethical means to produce meat products and substitutes.