Please ensure Javascript is enabled for purposes of website accessibility
Log In Help Join The Motley Fool
Free Article Join Over 1 Million Premium Members And Get More In-Depth Stock Guidance and Research
By Zhiyuan Sun – May 29, 2020 at 6:45AM

Here's why it is now a great opportunity to buy a company making an innovative therapy for patients with sickle cell disease.

Sickle cell anemia is a genetic disorder that reduces the capacity of red blood cells to deliver oxygen to organs across the body. The disease is estimated to affect more than 100,000 Americans and has a market opportunity worth $3.68 billion on a global scale.

Last year, the Food and Drug Administration approved Global Blood Therapeutics' (GBT 0.01%) novel therapy Oxbryta for the treatment of sickle cell disease. I've expressed skepticism about whether patients taking the drug would actually experience a meaningful benefit since Oxbryta had failed to demonstrate significance in a key clinical endpoint. However, long-awaited sales figures for Oxbryta have finally arrived, and they have put my concerns at ease. Without further ado, let's have a look as to why. 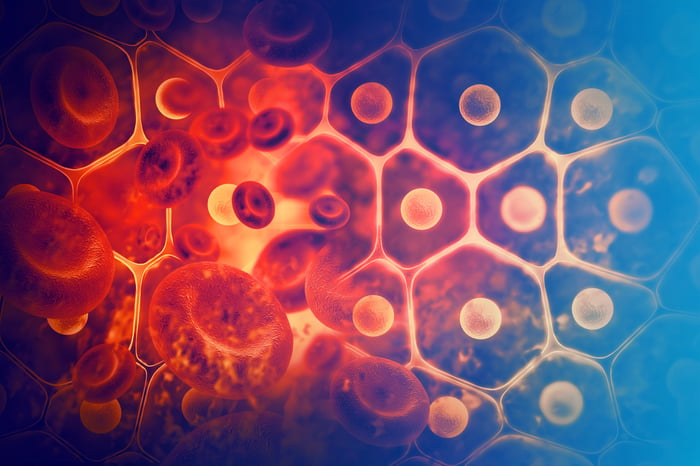 Up to 30.86% of patients with sickle cell disease may develop episodes of vaso-occlusive crisis (VOC), which is a life-threatening condition caused by the accumulation of deformed, or sickle-shaped, red blood cells that block major blood vessels. The major problem I had with Oxbryta was that while it addressed the root cause of sickle cell disease (improving patients' hemoglobin levels by a small margin), it did not demonstrate efficacy in reducing the number of VOCs.

Hence, this would cut off the drug's access to a significant minority of its total addressable patient size and might lead some physicians to think twice before prescribing the drug to patients. However, the market has spoken, and it turns out Oxbryta has been well received among the sickle cell community. Furthermore, the company is conducting clinical trials to expand Oxbryta's label to children with sickle cell disease under the age of 12.

In the first full quarter of Oxbryta's commercialization, the drug generated more than $14 million in revenue. Out of the 2,000 patient prescriptions for Oxbryta to date, new enrollment prescriptions during the quarter numbered 1,650. The drug's payers now represent 25% of covered lives and have received coverage in 11 of 17 fee-for-service Medicare states.

Compared to the $2.1 million in net sales Oxbryta generated in Q4, its 571% quarter-over-quarter revenue growth in Q1 brings relief to investors. The fact that the company was able to capture approximately 2% of the entire sickle cell treatment market in the U.S., in less than five months, is a very impressive feat.

Why the stock is now a great buy

Investors may be intrigued as to why now is a good time to buy the stock when the company has disclosed Oxbryta prescriptions have encountered a slowdown due to the impact of COVID-19. The rewards from market validation far outweigh the risks of a temporary pandemic. Keep in mind, Global Blood's market cap is well north of $4 billion. For a mid-cap biotech that has only one commercialized drug to date, it is very important the company can live up to its expectations. I think the results released in this quarter finally validated this as to make the company an attractive investment opportunity.

The company is in an optimal situation in terms of financial health, with about $615.2 million in cash and investments to offset a $73 million quarterly net loss from Oxbryta's commercialization expenses. Hence, investors with a contrarian mindset should do well picking up shares of Global Blood during a one-time negative impact due to COVID-19.