Please ensure Javascript is enabled for purposes of website accessibility
Log In Help Join The Motley Fool
Free Article Join Over 1 Million Premium Members And Get More In-Depth Stock Guidance and Research
By Travis Hoium – May 29, 2020 at 9:09AM

VR is still a small player in the technology sphere.

Facebook's (META 0.07%) Oculus is unquestionably the market leader in virtual reality headsets in 2020, and given the current competitors, I don't see that changing anytime soon. The Oculus Quest has made six-degrees-of-freedom virtual reality attainable for the masses, and expanded the ecosystem of headsets for consumers. The recent announcement of $100 million in content sales is a testament to the device's success.

As big as Oculus is, though, it's a bit player in technology overall. Its installed base is only a few million headsets, and only a fraction of the population has an understanding of virtual reality. Here's a look at Oculus's hits and misses over the last few years. 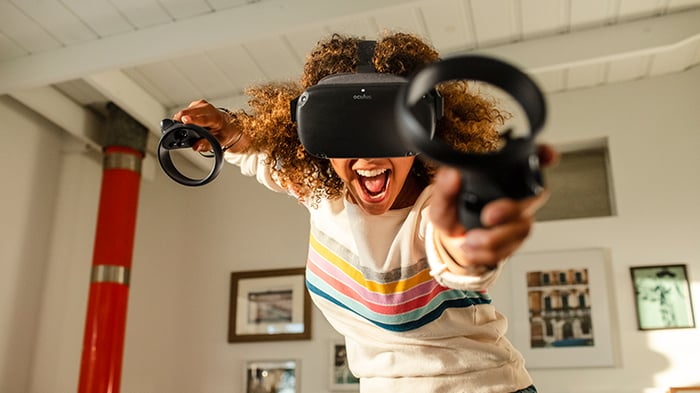 The focus for Oculus has clearly been the consumer market. The Oculus Quest is far less powerful than existing headsets like the HTC Vive Pro, and even Oculus's own Rift when it was launched, but a $400 price point and mobility that doesn't require a computer expanded the market.

Facebook doesn't disclose unit sales, but around 400,000 Quest devices were sold in 2019, and $100 million of content sales to devices is a solid start. But for Oculus to be a huge winner long-term, it can't leave potentially the most lucrative virtual reality market to the competition.

What Oculus has given up in designing a low-cost, mobile headset is most of the enterprise market. Enterprises typically need higher performance and more flexible capabilities, which is where HTC and upstart Pico Interactive have focused their development efforts.

The reason I think this is a big miss is that enterprises are likely to be the next wave of adopters of virtual reality. There's clear value for VR in architecture, data analytics, medicine, and more. Most of the software developers working in these markets aren't distributing products through Oculus, they're using platforms like Steam or going directly to customers.

Oculus has launched Oculus For Business to try to address some of these challenges, but the benefits to enterprise users may not be compelling. There's a kiosk mode -- which is nice for trade shows or applications where clients are using VR for a short period of time -- remote access, and the ability to update multiple devices at once. The features are nice, but a $1,000 price tag is steep for most businesses when a consumer device and off-the-shelf software can be used for less than half the cost.

Falling behind in enterprise won't be good for Oculus, either, because the opportunity for virtual reality in the enterprise market is enormous. Superdata estimates that $5.1 billion was spent on VR R&D in 2019, and the number could grow rapidly as more companies adopt VR. It's a market Oculus hasn't dominated so far, but it may be where the most value is in VR.

If Oculus puts its focus on the lucrative enterprise market and opens up headsets to more content options, I think this could be a nice product for Facebook. But the VR industry still pales in comparison to video game consoles and PCs, and Oculus hasn't been able to change that.