Please ensure Javascript is enabled for purposes of website accessibility
Log In Help Join The Motley Fool
Free Article Join Over 1 Million Premium Members And Get More In-Depth Stock Guidance and Research
By Keith Speights – May 30, 2020 at 12:35PM

And a couple of things to love.

After Aurora Cannabis (NYSE: ACB) posted surprisingly positive Q3 results last week, some might have thought that Canopy Growth (CGC 6.59%) would have good news in its quarterly update this week. It didn't.

Canopy announced its fiscal 2020 fourth-quarter and full-year results on Friday and the marijuana stock fell more than 20% in intraday trading, which gives you an idea of how the company performed in Q4. Here are 10 things to hate about Canopy Growth's Q4 update, along with a couple of things to love. 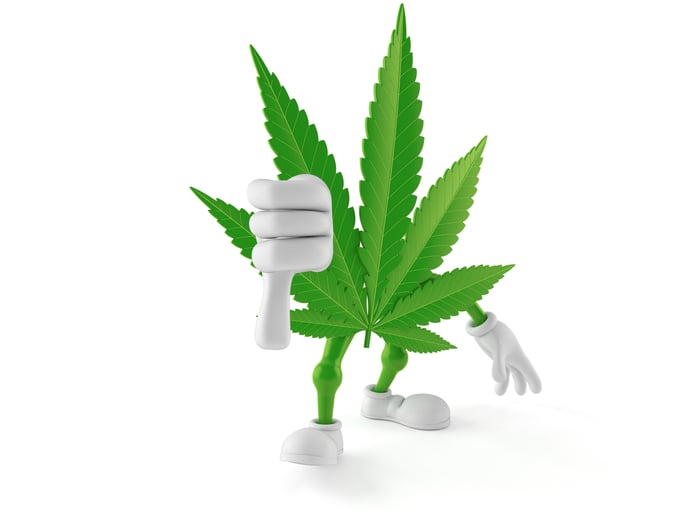 Analysts looked for Canopy to report Q4 revenue of 128.9 million Canadian dollars. The company didn't come anywhere close to that mark with its actual net revenue of CA$107.9 million. Sure, Canopy's revenue increased 15% year over year. However, it also fell 13% from the prior quarter.

2. An even worse bottom-line miss

If you think Canopy's revenue miss was bad, you'll really hate the cannabis producer's bottom line. Canopy posted a staggering net loss of CA$1.3 billion, or CA$3.72 per share, more than three times the amount of its loss in the prior-year period. The average analysts' estimate was that the company would record a net loss of CA$0.59 per share.

Canopy makes more money from business-to-business (B2B) sales of Canadian adult-use recreational marijuana than from any other source. Unfortunately, B2B was its weakest link in Q4 with sales plunging 31% quarter over quarter to CA$36.7 million. Although Canopy's sales of softgels, oils, and Cannabis 2.0 products grew, it wasn't enough to make up for the decline in sales for flower and pre-roll joints.

Perhaps "hate" is too strong of a word to use with Canopy's Canadian medical cannabis revenue, which rose 1% quarter over quarter to CA$14.9 million. However, Aurora's medical cannabis sales jumped 6% from the previous quarter. Canopy's growth was anemic in comparison.

German vaporizer maker Storz & Bickel was an important factor in Canopy's blowout results in the third quarter. S&B's sales soared 46% quarter over quarter then. It was a much different story in Q4, though. Canopy said that S&B's vaporizer revenue slipped in Q4 from the previous quarter. However, the company attributed this decline to seasonal factors.

Seasonal factors also played a role in BioSteel Sports Nutrition revenue sinking by 20% from the prior quarter. However, Canopy noted that the COVID-19 pandemic also caused BioSteel's third-party distribution and retail sales to drop in Q4.

Canopy warned in April that its global restructuring would lead to a charge of between CA$700 million and CA$800 million in its Q4 results. That's exactly what happened, with the company recording impairment and restructuring charges of CA$743 million.

The company's huge net loss in Q4 didn't stem entirely from the restructuring and impairment costs. Canopy's increased spending was also a factor. The cannabis producer reported that its selling, general, and administrative expenses jumped 17% quarter over quarter. When revenue falls and spending increases, a worsening bottom line is guaranteed.

Canopy said that it's withdrawing its previous milestones for generating positive adjusted EBITDA and net income. Why? Its new strategic focus and uncertainties related to the COVID-19 outbreak have muddied the waters too much for now. This is especially troubling since many investors were counting on new CEO David Klein to establish a clear pathway to profitability for the company.

While there was a lot to hate (or at least strongly dislike) about Canopy Growth's Q4 update, there were two things to love.

First, Canopy's new direction makes sense. The company isn't going to attempt to be the first entrant in every market. It's going to focus on the markets with the greatest opportunities, namely, Canada, Germany, and the U.S. It plans to use an asset-light model elsewhere.

Second, Canopy still has an enormous cash stockpile. The company reported cash, cash equivalents, and short-term investments totaling nearly CA$2 billion as of March 31. With greater fiscal discipline now in place, this cash position should enable Canopy to fund operations for a long time to come. Few other Canadian cannabis producers can make the same claim.