Please ensure Javascript is enabled for purposes of website accessibility
Log In Help Join The Motley Fool
Free Article Join Over 1 Million Premium Members And Get More In-Depth Stock Guidance and Research
By Lee Samaha - May 30, 2020 at 9:43AM

The lawn and garden products company is exciting investors due to its exposure to the cannabis market.

Having risen 42% so far this year and 70% over the last 12 months, Scotts Miracle-Gro (SMG -1.64%) is arguably already a millionaire-maker stock. The question is: Can it do it again? The lawn and garden care products supplier is one of the few companies that appears to have received some sales benefit from the COVID-19 pandemic, and there's reason to believe its sales momentum can continue afterwards. Does it all add up to make the stock a buy now? Let's take a closer look.

As Scotts' senior vice president Chris Hagedorn put it on the earnings call, some things people were "going to do when quarantine hit the whole country is they're going to sit at home and smoke pot and garden." That might not be great news for the rest of the economy, but it's pretty good for the company's lawn and indoor gardening products.

The gardening part comes from its U.S. consumer segment (lawn and gardens) while the cannabis connection comes from Hawthorne, its hydroponic & indoor garden business. 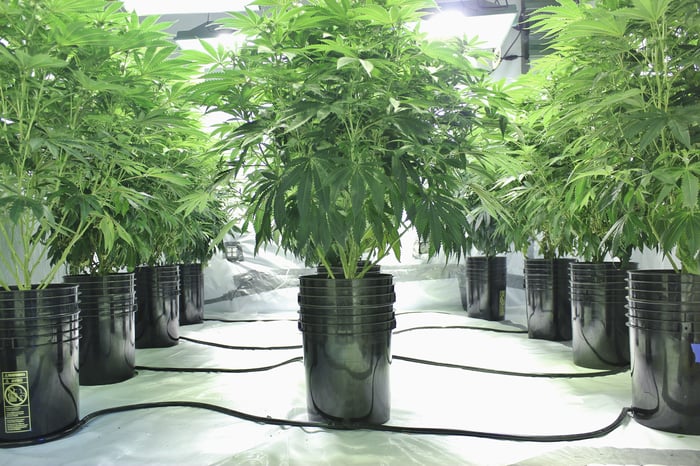 Scotts is often cited as a play on cannabis and that's a fair argument. Although its cannabis-related activities generated less than 11% of its profits in the first half, they contributed a significant part of the profit increase. In other words, the growth kicker is coming from Scotts' cannabis-related sales.

It appears that the company has seen some benefit to sales from the COVID-19 crisis and the bullish hope is that it will spur a long-term interest in gardening and cannabis cultivation. If so, Scotts could be set for a multi-year expansion in sales and earnings.

Meanwhile, even though the U.S. consumer segment sales rose 11% in both the first half and second quarter, management's full-year sales growth guidance for the segment remains between 1% and 3%. This is partly down to the heavy seasonality in the consumer segment's revenue. However, sales are heavily weighted toward April and May, but Jim Hagedorn described sales in the last week of April as being "pretty crazy" so there's reason to be positive ahead of the company's update in early June.

Both look a little conservative, as does the total full-year sales growth guidance of 6% to 8% compared to 18% growth in the first half. It calls into question management's full-year EPS guidance for $4.95 to $5.15. Interestingly, the Wall Street consensus is above the high end of management's range, at $5.26, a figure that would give the company a fiscal 2020 price-to-earnings ratio of a bit less than 29 times earnings.

The subject of guidance came up on the earnings call, with CFO Randy Coleman reminding investors, "this business can be incredibly volatile and seasonal." However, CEO Jim Hagedorn added that "sales over like last week have been like pretty crazy."

The company is clearly in growth mode right now, but after a very strong run, its stock price is now reflecting the better-than-expected sales growth in the first half. Moreover, the sales boost in the first half may well be coming, at least partly, from consumers buying ahead in anticipation of having difficulties obtaining products down the line due to the COVD-19 pandemic.

Meanwhile, Hawthorne has a track record of highly volatile sales growth. Organic volume increased 20% in 2017, only for organic sales to decline 27% in 2018 but then grow 24% in 2019. It's a growing business, but it's definitely not going to be in a straight line.

That said, the volatility of sales growth at Hawthorne and the possibility that some sales have been forward suggests investors should be a bit cautious after such a strong share price rise. Moreover, the reality is that most of the market is probably expecting a guidance hike for 2020 to come soon, so a lot of the good news is already priced in.

All told, Scotts Miracle-Gro is a very interesting stock, but this might not be the right entry point into it.