Please ensure Javascript is enabled for purposes of website accessibility
Log In Help Join The Motley Fool
Free Article Join Over 1 Million Premium Members And Get More In-Depth Stock Guidance and Research
By Adria Cimino - May 31, 2020 at 8:54AM

Moderna shares have dropped from a record high. Here’s what hurt the stock -- and what could lead to recovery.

Moderna (MRNA 2.58%) shares skyrocketed 309% this year to a record high on May 18 as investors bet on the company's investigational coronavirus vaccine. But sentiment hasn't been so great in recent days, and the stock dropped 35% from that high. 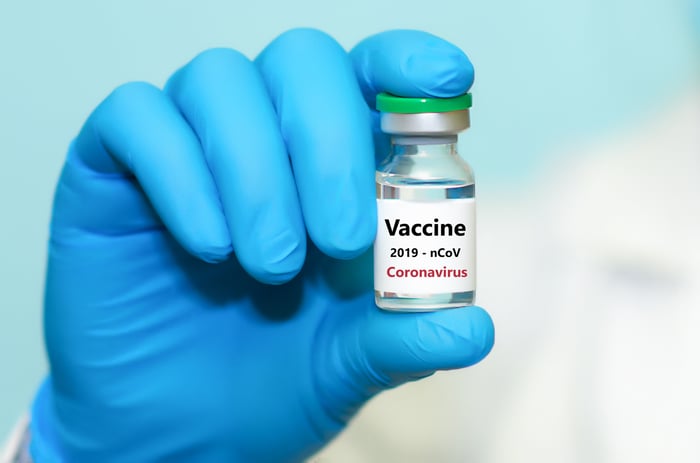 What has investors worried? A few recent headlines.

Moderna's Chief Executive Officer Stephane Bancel and three other executives sold some of their shares, according to recent filings. Those filings were released after the share price peak, which came after Moderna reported encouraging data from its coronavirus vaccine trial.

On the surface, this might look like wavering confidence from executives. But here's the key point: The sales each were done under a Rule 10b5-1 trading plan, which allows insiders to sell a preset number of shares at a preset date. That means these sales were routine transactions and not specifically made in response to news or a share price move. Still, it's important to keep an eye on how frequently and how much insiders are selling, as a trend may offer clues about sentiment. So, while not worrisome right now, this is a point to watch.

In other news, rival Novavax (NVAX -1.17%) enrolled the first patients in its phase 1/2 coronavirus vaccine trial and said it expects immune response and safety results in July. The phase 1 portion will involve 130 healthy participants in Australia, and the phase 2 portion will follow up with sites across countries including the U.S.

Moderna is leading the race, having entered clinical trials first, and recently received regulatory approval to begin its phase 2 trial. Though the company is ahead of the game when it comes to timing, any possible setback offers an opportunity for a rival to gain ground or even take the lead. But should we really worry about competition? I don't think so. As with the flu, we can expect that more than one treatment or vaccine will make it to the market. My main concern at this point would be any interim data from Moderna's trials.

Speaking of which, Moderna's shares also slipped as a 29-year-old trial volunteer who had received the highest vaccine dose told STAT News he developed a high fever and nausea after the second dose. Ian Haydon, fully recovered, said the experience was all part of normal vaccine testing -- he decided to come forward to emphasize the importance of taking the time needed for vaccine development and testing. In trials, we can expect some reports like Haydon's, especially as researchers try to find the best dosage for a vaccine.

This relates to another factor that weighed on Moderna's shares this week. Merck (MRK 0.53%) CEO Ken Frazier told The Financial Times that 12 to 18 months to develop a coronavirus vaccine was "very aggressive" and he wouldn't want to hold his company to that timeframe. This comes after the Trump administration announced Operation Warp Speed, an initiative to accelerate the development of a coronavirus vaccine with a goal of bringing one to market by January.

Frazier's comments are valid. Traditionally vaccine development takes years, and testing involves thousands of volunteers over periods of months or years. No matter what anyone promises right now, we won't know if traditional timelines can be shortened until we see more data from Moderna and other companies. Down the road, the possibility that vaccine testing and approval will take longer than planned represents a risk for Moderna and its rivals.

Are the gains over?

I don't think this recent wave of news will have a lasting effect on the Moderna share price, though more headlines of the kind could cause short-term moves -- higher or lower.

Clinical trial results are really the crucial element that will drive Moderna's share performance in the coming months. Why? Because only this data can lead to vaccine approval. Key information will be overall safety and immune response -- and it will be important to see this in larger populations in the phase 2 and phase 3 studies. If Moderna delivers on these points, we can expect more gains from shares of this biotech company.