Please ensure Javascript is enabled for purposes of website accessibility
Log In Help Join The Motley Fool
Free Article Join Over 1 Million Premium Members And Get More In-Depth Stock Guidance and Research
By Billy Duberstein – May 31, 2020 at 10:15AM

Two top tech names face off in an epic battle for your investment dollars.

It goes without saying that two of the very best companies in the world are Amazon.com (AMZN 4.50%) and Alphabet (GOOG 3.13%) (GOOGL 3.04%), the parent company of Google. In fact, Google and Amazon ranked Nos. 2 and 4, respectively, on this year's Forbes "most valuable brands" list.

No doubt, both companies have large, dominant, and growing businesses, strong balance sheets, compelling growth prospects, and excellent management. But which of the two makes for the better buy today? Let's dig in.

Amazon and Alphabet tend to compete more and more with each other as time marches on, but each company still has a dominant market share of their respective core businesses: e-commerce for Amazon; digital advertising for Google.

Alphabet leapt out front to emerge as the world's best search engine, benefiting from powerful network effects that made Google better and better with more and more users. Today, Google has an incredible near 90% market share in online search, which is one of the highest market shares you will see for any business ever.

Google's dollar-based market share in digital advertising is strikingly similar to Amazon's share of e-commerce. According to eMarketer, Amazon has roughly 38% of the U.S. e-commerce market. And according to Digital Commerce 360, e-commerce made up only about 16% of all U.S. retail last year, meaning Amazon, for all its talk about monopoly power, still accounts for only around 6.5% of all U.S. retail sales.

Therefore, both companies have strong leadership positions in their respective industries. That has brought up antitrust concerns recently, and the U.S. government is currently investigating both companies. However, as Google has just 30%-40% of U.S. digital advertising (and even less of total advertising), and since Amazon has under 40% of e-commerce, and thus under 10% of total retail sales, I really don't anticipate significant antitrust action.

In addition, digital advertising and e-commerce are both growing steadily, despite their large size. E-commerce as a whole should definitely get a lasting bump from the stay-at-home economy brought on by the coronavirus, while digital advertising should take more and more share from out-of-home advertising sources and traditional TV in this environment as well.

Basically, both companies have very formidable positions in their respective "core business," and each of those businesses still has significant growth potential. Not a bad starting point.

Amazon up in the cloud, but Google challenging from below

In addition to each company's core business, I think it's safe to say both companies' secondary business is enterprise cloud computing. On this front, Amazon is the clear leader, having invented the concept, while Alphabet is currently growing faster, though well behind Amazon, with the third largest market share.

Amazon's cloud is nearly four times larger than Google's and is also highly profitable. Meanwhile, Google's cloud platform is growing faster, though the company doesn't yet disclose its cloud margins.

Still, Amazon first disclosed its figures for Amazon Web Services (AWS) in its 2015 annual report, when AWS was smaller than Google Cloud is today. Yet even then, Amazon disclosed a healthy operating margin of around 24%. The fact that Google isn't currently disclosing its margins could mean that it isn't as efficient or profitable as AWS is. AWS also has a significant scale advantage and has continued to lower prices for customers over the years, which means Google may be racking up more lower-margin sales.

Still, the fact that Google is growing its cloud so quickly means it will probably one day have a larger, more profitable cloud business than it does today. Most enterprises now use more than one cloud vendor to prevent "lock-in," and there appear to be only three cloud infrastructure companies that can compete on a large scale. Amazon and Google are two of them, which means the cloud is a big and positive deal for both.

While Alphabet is challenging Amazon in cloud, Amazon has been building up quite a digital advertising business across its e-commerce site, Amazon Fire TV sticks, Twitch e-sports streaming platform, and IMDB TV. According to eMarketer, Amazon could take more digital advertising market share in the years ahead, going from 9% share to 14% of U.S. digital ad sales by 2023.

In addition, both companies are duking it out in the smart home speaker market. Amazon's echo devices are leading the smart-speaker market, but like in the cloud, Google's home assistant is in a strong second place and has gained seven percentage points of market share in the first quarter, according to Voicebot research.

Beyond these new businesses, each company is also embarking on next-generation solutions that could take years to ramp up. One of the biggest for Amazon could very well be its third-party package delivery, which began as an internal project but could very well grow into a significant challenger to UPS and FedEx. Bank of America analyst Justin Post thinks Amazon could take advantage of the low-costs of plane leasing during this pandemic, building Shipping with Amazon into a business that could become worth $100 billion-$250 billion by 2025.

Meanwhile, Alphabet has its own set of future products, though I would classify Alphabet's projects more as "moonshots," meaning they have high potential upside, but also higher risk. These are more ambitious projects such as its Waymo subsidiary's self-driving technology, or Calico Labs, which is working on solutions to extend the human lifespan.

Of Google's many seed projects and investments, Waymo looks like it could become the biggest the most quickly. In the first quarter, Waymo received outside funding, valuing the business at $30 billion. Still, Morgan Stanley analyst Brian Nowak valued Waymo's potential as high as $105 billion, based on his estimates as of last September.

The larger point is that even though both companies have strong core and secondary cloud businesses, neither is taking its foot off the gas pedal in terms of investing in new business ventures, either. Between the two, Amazon's businesses look to be more realistic and more grounded in existing services, though they are capital-intensive and competitive. Meanwhile, Alphabet's new projects are looking to invent something new, which is riskier, but with the potential to be more game-changing.

In terms of valuation, it's not particularly close -- Alphabet is far cheaper on traditional earnings metrics; however, investors should know by know that Amazon has made it a feature of its business to invest all excess profits into new ventures. That may depress current earnings figure, but it usually pans out, with Amazon having invented many large businesses over the decades.

That has made Alphabet far cheaper on a price-to-earnings basis, while the valuations do get a bit narrower on an enterprise value-to-EBITDA basis. That being said, Amazon is growing faster, and its e-commerce-centered revenue accelerated with the breakout of the COVID-19 pandemic, while Alphabet's advertising-centered revenue growth decelerated mightily. 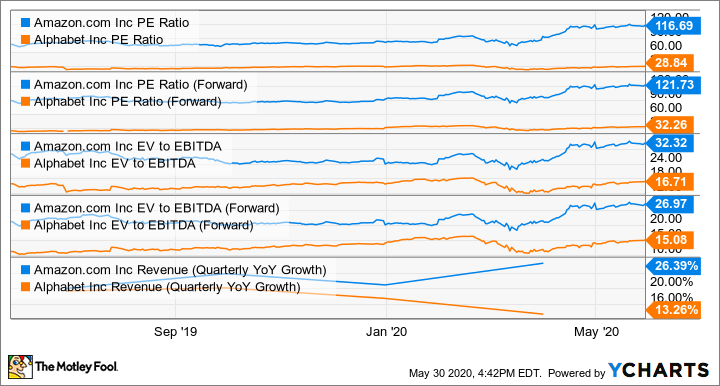 Thus on valuation, Alphabet appears the stronger bet from a value investing standpoint, but Amazon's bigger near- and intermediate-term term growth prospects makes it the a more compelling growth stock.

It's pretty hard to make a definitive judgement between Amazon and Alphabet -- in fact, they're two of my largest personal holdings. For what it's worth, Amazon is a larger position for me, as I think it has more avenues for growth. Yet each has a compelling mix of safety and growth that puts them in very rarefied air in this uncertain market. Alphabet has a huge amount of cash, is highly profitable, is buying back stock, and is cheaper. In addition, it's placed its bets on several "moonshots" that could pay off years or decades down the road.

On the other hand, Amazon's businesses are much "safer" in that e-commerce, cloud computing, shipping, streaming video, and esports are very stable, established, large and growing businesses, and Amazon typically has a strong leading position in each. While you are sacrificing traditional safety in terms of value metrics with Amazon, Amazon's moats in its various established segments are as strong as you can find, and these markets are still large and growing. In addition, I think Amazon has more intermediate-term growth prospects than Alphabet from things like shipping and Twitch e-sports, though Alphabet is no slouch in terms of new growth ventures either.

At this time of great uncertainty, however, I'd recommend adding both companies as core holdings to any portfolio, giving each company's mix of safety, growth, balance sheet strength, and culture of innovation.