Please ensure Javascript is enabled for purposes of website accessibility
Log In Help Join The Motley Fool
Free Article Join Over 1 Million Premium Members And Get More In-Depth Stock Guidance and Research
By Zhiyuan Sun – May 31, 2020 at 8:16AM

Can a former Enron trader make prescriptions more affordable in the U.S.?

Ongoing efforts to contain the COVID-19 pandemic have deeply divided Americans. A recent poll by FiveThirtyEight found 82.2% of Republicans support President Trump's emergency response, compared to just 12.5% of Democrats. However, setting COVID-19 discord aside, there seems to be an issue Republicans and Democrats agree on -- prescription drug prices in America are too high and need to be drastically lowered.

Believe it or not, one key player in tackling this problem is a former Enron trader turned billionaire hedge fund manager turned philanthropist named John Arnold. Just what could lead an enigmatic person with a high net worth to tackle one of the greatest problems facing our society? Let's find out. 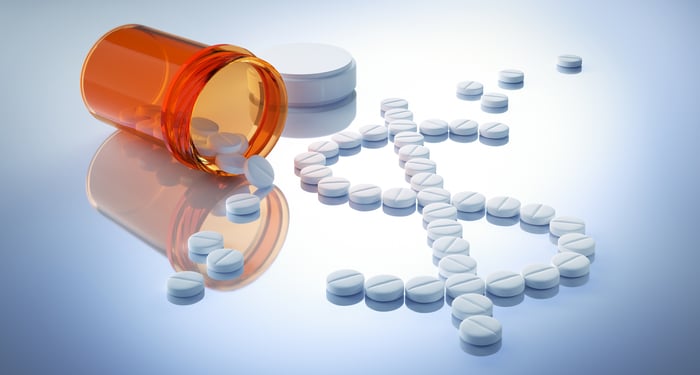 Who is John Arnold?

Arnold began his energy trading career in 1995 at the infamous firm Enron. Unlike its founders, Arnold was never accused of fraud or any misconduct. At age 27, he earned more than $750 million alone in trading profits for the firm in 2001 alone.

Following Enron's 2001 bankruptcy, Arnold started his own hedge fund, Centaurus Advisors. The firm was wildly successful from the get-go, making between 100% to 300% returns annualized every year from 2002 to 2009. In 2006, Arnold made $4 billion betting that the "widowmaker" spread in natural gas future prices would narrow -- it's called the "widowmaker" in reference to how financially dangerous the bet could become -- and blew up one of the biggest energy hedge funds in Canada, which was on the opposite side of the trade.

After the momentum on his trading returns began to dwindle in the early 2010s, Arnold shut down his hedge fund and, together with his wife, founded the Laura and John Arnold Foundation to pursue ventures in philanthropy. In 2014, Arnold saw a TV ad criticizing an $11,000 per month cancer drug, leading him on a crusade to bring prescription drug prices down in America. The foundation is now known as Arnold Ventures LLC and is based in Houston, Texas with 102 employees. The Arnolds have signed the "Giving Pledge," a program where high net worth people commit to giving away a large amount of their wealth during their lifetimes.

What Arnold Ventures is doing

Arnold Ventures is able to narrow in on the heart of the problem -- lack of legislation to regulate drug prices. Lobbyists overwhelmingly represent the multibillion-dollar pharmaceutical industry to Congress and aim to quash efforts from any groups advocating for affordable drugs. However, by leveraging his wealth and power, Arnold is able to exert direct influence on legislation involving prescription drugs.

So far, the Arnolds have spent more than $60 million in lobbying efforts against exorbitant drug prices. These initiatives range from paying for TV ads against pharmaceutical lobbyists, providing funding for academic researchers who call for lowering drug prices, and backing advocates who testify on Capitol Hill regarding this issue.

The efforts have made progress. Last year, House Democrats, led by House Speaker Nancy Pelosi, passed the first-ever bill to require Medicare to negotiate the price of between 50 and 250 prescription drugs, which STAT News linked to direct advocacy from the Arnolds. The bill has stalled, making no progress in the Senate, and it may take a dramatic change such as former vice president Joe Biden winning the presidency or the flipping of the Senate to a Democratic majority in the next election cycle for the bill to progress toward becoming law.

But all this drug pricing drama brings up a fundamental question: Why do prescription drugs cost so much in America compared to everywhere else in the developed world?

Why are drugs so expensive in America?

It's expensive to conduct clinical trials and to get new drugs approved by the Food and Drug Administration. Most pharmaceutical companies in the rest of the world (especially in developing nations like China and India) do not produce new drugs. Instead, they make copycat versions (generics) of new drugs after the branded versions lose patent protection. It's obviously much cheaper to copy than to innovate.

Meanwhile, although the U.S. accounts for only 4% of the world's population, it accounts for nearly 50% of the world's medical research and development. Indeed, of every 100 drugs classified as new chemical entities that are approved around the world, about 57 of them come from America.

It can cost up to $2.6 billion and nearly a decade of effort for a drug to progress from clinical trials to launch on the market. If a company sinks $2.6 billion into clinical trials for a drug treating condition that affects only about a thousand patients, you can expect the treatment to cost a lot because R&D costs must be passed to some payer. And if the drug fails its clinical trials, as 90% of drug candidates do, then a company has even more R&D costs to recoup by starting over again by investigating another condition.

Take the case of Gilead Sciences' (GILD -0.76%) remdesivir, the first FDA-authorized treatment for COVID-19 that has demonstrated efficacy in placebo-controlled phase 3 clinical trials. Recently, an estimate by Public Citizen shows the drug costs only $0.93 per dose to manufacture. The company has said it will donate nearly one million of its existing doses to the federal government.

Well, the cost of administrative expenses aside, Gilead estimates remdesivir's R&D costs could reach $1 billion this year. This dwarfs the National Institute of Health's entire $700 million spent to incentivize all healthcare companies to research COVID-19 and develop medicines.

So far, about $70.5 million of taxpayers' money has gone toward bringing remdesivir to market, including when it was first being developed as a treatment for Ebola. So where is the rest of the $929.5 million in funding going to come from? Well, it should be no surprise Gilead will have to pay out of its own pocket and pass some of this cost to patients with COVID-19 and their insurance companies.

The U.S. healthcare system finds itself in a catch-22. Pharmaceutical companies must be rigorously scrutinized for jacking up drug prices, but this freedom to set prices incentivizes companies to find many of these life-saving medicines. Otherwise, the world may become a bubble of generic pharmaceutical companies, where endless copycat drugs are made, but little is done to combat the troubling diseases plaguing mankind, such as cancer and Alzheimer's disease. Innovation comes at a cost, but should this cost be footed by the American public?

Healthcare investors should stay informed about the Arnolds' drug advocacy efforts because they could have far-reaching effects. If the U.S. government obtains the power to set drug prices in the future, then healthcare stocks would no doubt witness material declines as this would directly affect their profitability. But for American patients, legal changes to make drug prices more affordable would be a welcome change.