Please ensure Javascript is enabled for purposes of website accessibility
Log In Help Join The Motley Fool
Free Article Join Over 1 Million Premium Members And Get More In-Depth Stock Guidance and Research
By Rick Munarriz – Jun 1, 2020 at 8:30AM

It's going to be another big month for the media giant, with a couple of notable Disney+ releases and rivals reopening their theme parks.

May wasn't too bad for Disney (DIS -2.60%) shareholders. The stock moved 8.5% higher for the month, nearly doubling the general market's return. A mixed quarterly report, the reopening of Shanghai Disneyland, and setting a July 11 date to start greeting theme park visitors at Disney World have set the tone for the media giant.

June promises to be just as exciting. Between rivals that are opening up their gated attractions, another theatrical release going the Disney+ route instead, and a high-profile series launching on the premium streaming service, there will be a few dates for Disney investors to watch out for this month. 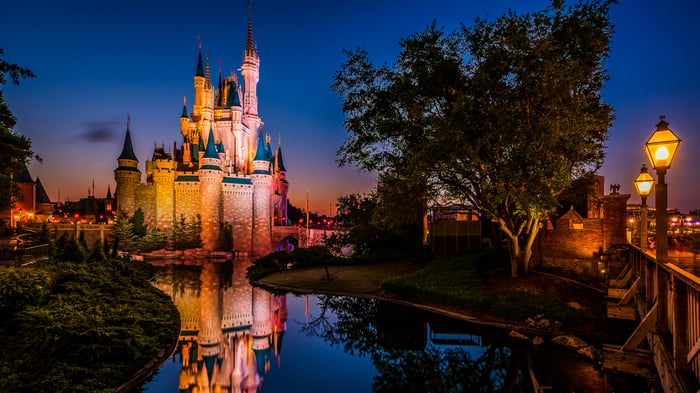 This is going to be a big week for theme park operators in Central Florida not named Disney. Legoland Florida opens on Monday. Comcast's (CMCSA -1.94%) Universal Orlando follows on Friday.

Universal Orlando is Disney's biggest rival, and it's fair to say that the House of Mouse will be watching the situation closely ahead of its own phased reopening five weeks later. Both parks are breaking in similar guest restrictions and incorporating social distancing requirements, and by the time Disney opens, we'll know if guests are comfortable complying with the situation in a way that will eventually be profitable.

Two weeks after Artemis Fowl was supposed to be making its theatrical premiere, the live-action film based on the first two novels of the popular children's fantasy book series of a 12-year criminal mastermind will make its debut on Disney+ on June 12. These are interesting times, and while Disney has been pushing out other films including its live-action Mulan reboot and Jungle Cruise later into the slate of future releases, it's interesting that it chose to take a different approach with Artemis Fowl.

This will be Disney's first full-length feature that was supposed to go to the big screen that goes directly to Disney+. Pixar's Onward had its multiplex run cut short as the COVID-19 pandemic unplugged projectors across the country, but at least it had two weeks of availability as a premium digital purchase before shifting to Disney+. Onward made a little money at the box office, and a bit more in a la carte digital sales. Artemis Fowl is going right to the Disney+ release window.

Was the movie testing poorly with initial viewers, or does Disney have a greater plan here? There are eight novels in Eoin Colfer's Artemis Fowl series. With theaters not likely to be hotbeds of popcorn-chomping activity anytime soon, Disney+ presents a larger potential audience to be exposed to the franchise.

Another popular young adult book series about an exceptional 12-year-old coming to Disney+ is Percy Jackson and the Olympians: The Lightning Thief. Rick Riordan's five-book series has largely faltered on the big screen, and this is another shot to bring the mythologically inspired franchise to video.

The catch is that it's coming out as a new series now. With Disney+ hungry for a follow-up hit after The Mandalorian put the platform on the map, this could be a big addition to the premium service.

With Disney's theme parks, cruise ships, retail stores, and movie studio currently on pause, there's a lot riding on Disney+ as well as its cable and broadcasting stronghold. Disney is every inch a media stock right now, and it can't afford to miss.