Please ensure Javascript is enabled for purposes of website accessibility
Log In Help Join The Motley Fool
Free Article Join Over 1 Million Premium Members And Get More In-Depth Stock Guidance and Research
By Will Healy – Updated Jun 2, 2020 at 10:34AM

The pizza chain has run out of obvious tailwinds.

Editor's note: This article has been updated to note that the company's current CEO is Rob Lynch.

Papa John's International (PZZA -2.41%) has become one of the more notable success stories of the COVID-19 pandemic. With competition from sit-down restaurants temporarily sidelined, the pizza delivery giant prospered as diners turned to its well-established delivery service.

Despite a sell-off in February, Papa John's stock has surged more than 170% from the bottom it hit in mid-March. Yet, with restaurants across the country resuming partial operations, investors may need to rethink the value proposition of Papa John's.

In a strange twist, Papa John's is one of the few consumer-discretionary stocks that flourished amid the pandemic. As a take-out and delivery business, the pizzeria's operations were not majorly affected by widespread lockdowns.

From April 27 through May 24, comparable sales in North America grew 33.5% from year-ago levels. And in the fiscal first quarter, Papa John's reported earnings of $0.15 per share, reversing the year-ago loss of $0.12 per share. 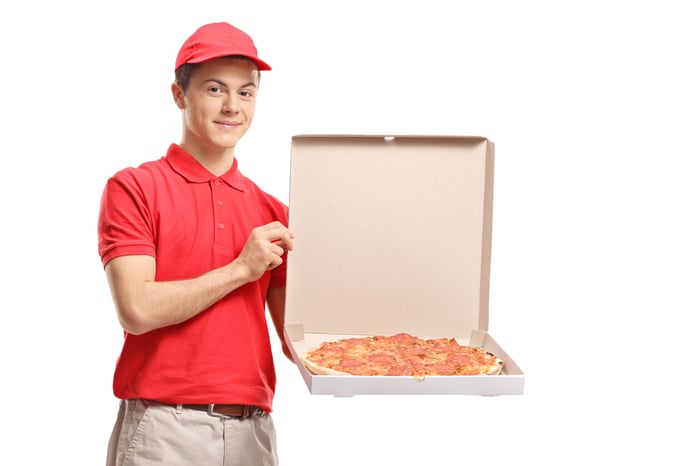 Papa John's stock had been struggling for the past several years. From its peak in late 2016, the stock proceeded to lose more than half of its value as founder John Schnatter became embroiled in controversy. Schnatter eventually stepped down from his role as CEO and later, from the board of directors. Steve Ritchie replaced him as CEO and held that job until August of last year.

Now under current CEO Rob Lynch, Papa John's continues to move on from the John Schnatter era. In a recent SEC filing, the company revealed that Schnatter had sold most of his stake in the company. Now that Schnatter only owns 4% of the company, the SEC no longer requires him to file reports on his holdings.

Due to this transition and the pandemic, Papa John's stock has had a wild year. Initially, panic-selling in the market took Papa John's as low as $28.55 per share. By early May, the stock briefly surpassed the $80 per share level. At about $78 per share as of this writing, the stock is easily outperforming the broad market year to date. 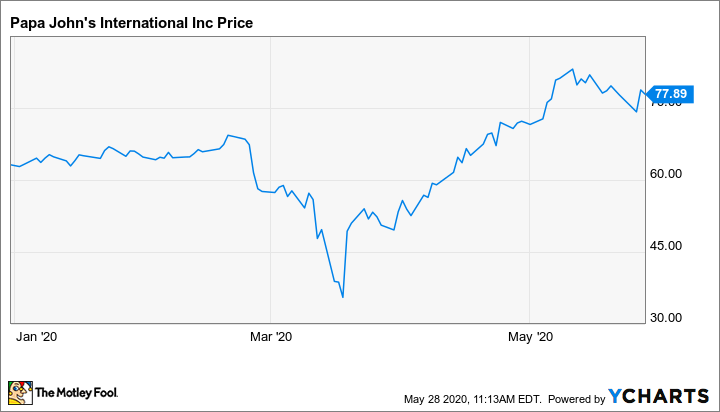 Nonetheless, the rise in Papa John's stock has elevated the forward price-to-earnings ratio to just over 61.3. With earnings expected to grow almost 24% in fiscal 2020 and nearly 25% in fiscal 2021, Papa John's current rally is understandable.

The company is even outperforming its longtime rival, Domino's Pizza. The latter trades at just under 37 times forward earnings, but analysts expect single-digit growth in 2021.

Papa John's shareholders should assume that the stock's current valuation prices in a lot of optimism. While 20%-plus growth is impressive for the pizza chain, one has to question how long investors will pony up the premium, not to mention how long the company can actually sustain that momentum.

Moreover, despite the recent bullish trend, the stock still faces uncertainty as it seeks to return to its 2016 high. Near term, if infection rates continue to fall, the company could see a rapid decline in demand as consumers return to their favorite local eateries, and the need for takeout or delivery pizza slows.

The longer-term growth trajectory of the company, not to mention its 1.2% dividend, may keep longtime investors in the stock. However, with a high valuation, one fueled by the unique circumstances brought about by a life-changing but likely temporary global pandemic, investors should not expect Papa John's to be able to sustain its recent rally.