Please ensure Javascript is enabled for purposes of website accessibility
Log In Help Join The Motley Fool
Free Article Join Over 1 Million Premium Members And Get More In-Depth Stock Guidance and Research
By James Brumley – Jun 1, 2020 at 7:30AM

Putting new self-driving technology to use would cut some costs but also create new problems that still cost money to solve.

While still unconfirmed by Amazon (AMZN), the rumor makes enough sense. The e-commerce giant is spending a fortune making deliveries to customers' homes. Taking the cost of a delivery driver out of the equation could certainly help save the company some money.

Making robotaxi technology outfit Zoox part of the Amazon family, however, is far from simply putting its technology to use in a new way. The solution to one of Amazon's problems creates new logistics challenges to tackle.

Zoox has been working on driverless taxi technologies since it was founded in 2014. Like most of its rivals in the space, including Alphabet project Waymo and Uber, Zoox isn't a commercial success yet. 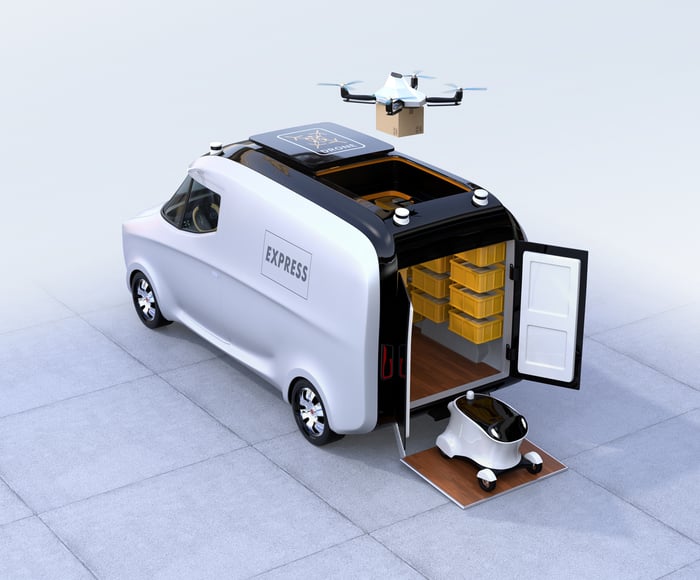 Still, its self-driving technology has value, even if not the initially intended one. The Wall Street Journal reported on Tuesday that Amazon was "in talks" to acquire Zoox, quoting "people familiar with the matter."

On Wednesday, Morgan Stanley analyst Brian Nowak responded by suggesting Amazon could save $20 billion annually by tapping Zoox's autonomous driving know-how, as reported by Bloomberg. Rather than getting into the robotaxi business -- which is still a possibility -- Amazon could eliminate delivery drivers within its growing logistics network.

That's an aggressive savings estimate, though, and easier said than done.

The tricky part about saving money is that it can require additional investment to realize those savings. If autonomous last-mile delivery vans powered by Zoox's technology are part of Amazon's plans, the e-commerce giant is no exception to this possibility. The tallest hurdle, ironically, is getting a package from the curb of a road to your doorstep. Humans do this quite well, but autonomous vehicles can't.

Robots could do this job as well, of course, much like robots already do within Amazon's warehouses. The company continues to experiment with flying delivery drones as well -- all cutting-edge stuff. How does a self-driving delivery van get a package to your door, though? Or how does an autonomous delivery van bring multiple packages into an apartment building or an office building? As Gartner's Michael Ramsey wisely put it in 2018: "They still haven't figured out that last 50 feet, and that may be critical in deciding whether these are novelties or a worthwhile convenience for both retailer and consumer."

There is a solution to the problem, for the record. Companies can inform customers their parcel has arrived and summon them to the delivery vehicle to retrieve it. That's a huge request of consumers though, and for some, it largely defeats the purpose of at-home delivery. For others it's an outright impossibility. Amazon's Scout delivery robot partially addresses that problem. The shopping cart-sized robot uses sidewalks and can get closer to a door. But Scout is relegated to sidewalks and only travels about four miles per hour, and it still needs to be loaded with packages manually.

That means Amazon still has to operate localized hubs to load up Scout's packages, and it would still need an army of these self-driving vehicles to cultivate enough scale to even have a shot at saving some money. But those local distribution hubs, robot maintenance, and outright robot purchases add costs back in.

Even Amazon may not know its exact delivery costs

There's also the not-so-small matter that Morgan Stanley's estimate of potential payroll savings is just a shot in the dark.

Nobody may be able to pinpoint exactly how much Amazon shells out every year explicitly to and because of its delivery people. The "purchase price of consumer products, inbound and outbound shipping costs, including costs related to sortation and delivery centers and where we are the transportation service provider" are all melded together as part of Amazon's total cost of sales. We do know the organization's total shipping costs reached $27.7 billion in 2018 and then swelled to $37.9 billion last year after Amazon made one-day delivery the norm for a wider range of products for Prime customers. That spending included sortation, delivery center operations, and other transportation costs, though.

Morgan Stanley's suggestion that the company could save $20 billion per year implies a stunning half of those expenses could be wiped away. That's a bold expectation. And again, rolling out autonomous delivery vans would in some ways require the addition of new, human-powered distribution infrastructure anyway.

The idea of using new tech to solve old problems is great on the surface. Indeed, that's the whole point of creating new technologies and innovating.

Adopting a new technology just for the sake of shrugging off the old ways -- simply because you can -- doesn't inherently translate into progress, though. Without a specific, well-thought-out plan to phase out drivers and phase in autonomous delivery vehicles, Amazon may find out employing actual people isn't such a bad or expensive thing. The e-commerce outfit may also learn that human beings remain the ultimate problem-solving hardware, and that each of its delivery drivers solves countless unforeseen, unprogrammable problems every day.

That is, if the company is truly is interested in Zoox for its self-driving tech and not just as a foray into the robotaxi business. It's still only a rumor at this point. Zoox has only confirmed that it's entertaining multiple "strategic transaction" options.