Shares of Gap (GPS 0.00%), the apparel and accessories retailer, jumped 8% on Tuesday as investors digested a number of developments and data ahead of the company's fiscal first-quarter earnings report after market close on Thursday, June 4.

One optimistic data point that could have driven Gap's stock higher today came from S&P Global Market Intelligence. The financial information and analytics company surveyed 1,250 people from April 30 to May 18 and found that 44% of consumers polled plan to start shopping at retail stores as soon as local restrictions are lifted, compared with only 31% saying they plan to immediately return to eating out. 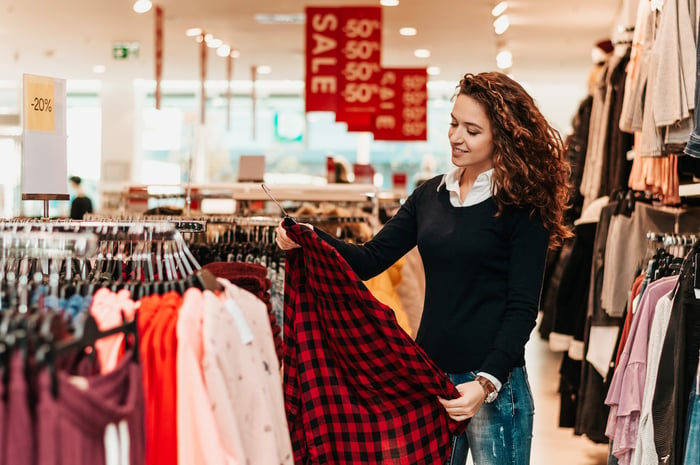 That preference for retail shopping over restaurant dining is encouraging for Gap and other apparel retailers. But it's also important to note that the U.S. Department of Commerce announced on May 29 that consumer spending fell 13.6% in April. That drop was the most significant on record and far worse than March's 6.9% decline. Only time will tell, but it's possible there is some pent-up demand as Americans' personal savings rate increased to 33% in April, which could mean increased spending as consumer confidence about the economic recovery improves.

Another important trend for investors to consider (especially as management discusses its strategy during its fiscal first-quarter earnings call on June 4) is that analysts expect sales to recover faster at discount and off-price retailers. That suggests consumers are willing to spend if there are deals or compelling value. Gap has shed roughly 40% of its value year to date, compared with only a 4% drop in the S&P 500, which emphasizes how difficult COVID-19, social distancing, and store closings have been for retailers.

As parts of the economy reopen, analysts jump on board oversold stocks, and consumers seem inclined to spend at stores, investors are optimistic heading into Gap's fiscal first-quarter report. That said, investors would be wise to take this jump with a grain of salt and to expect some rough financial data.