Please ensure Javascript is enabled for purposes of website accessibility
Log In Help Join The Motley Fool
Free Article Join Over 1 Million Premium Members And Get More In-Depth Stock Guidance and Research
By Adam Levine-Weinberg – Jun 3, 2020 at 10:25AM

The temporary closure of its malls from COVID-19, along with retail bankruptcies and a likely wave of store closings in the months ahead, have driven CBL & Associates to the brink of bankruptcy.

Real estate investment trusts (REITs) rarely file for bankruptcy protection. As income-oriented investment vehicles, REITs tend to be managed conservatively: Steady cash flow is the goal, not rapid growth. Most REITs also have diversified tenant bases, mitigating the risk of losing rent due to tenant-specific problems. Furthermore, lenders generally require REITs to limit their borrowings to no more than 60% or 65% of the value of their assets, providing a meaningful margin of safety in the event of market turbulence.

However, while REIT bankruptcies are rare -- and may not lead to a complete loss of shareholder value, as seen following the 2009 General Growth Properties bankruptcy -- REIT stocks can go to zero. Indeed, that could soon be the fate of long-suffering mall REIT CBL & Associates (CBL). Earlier this week, CBL skipped an $11.8 million interest payment. If it doesn't make that payment within a 30-day grace period, the company would default on much of its debt, likely leading to bankruptcy.

The source of CBL's woes

Problems have been building up at CBL for several years. Unless you've been living under a rock, you're probably aware that mall traffic has been plunging in the U.S. The convenience of e-commerce, the low prices available at discount and off-price stores (which typically aren't located in malls), and a shift in consumer spending away from apparel have represented a triple-whammy for malls -- and the department stores that typically serve as anchor tenants.

Department stores have been losing traffic to non-mall rivals for many years. Image source: J.C. Penney.

The most successful "Class A" malls are profitable and valuable enough that their owners have been able to make big investments to adapt to changing consumer tastes. As a result, the top several hundred malls in the U.S. remain vibrant shopping destinations. Indeed, many of them have posted strong growth in sales per square foot over the past few years.

Unfortunately, Class A malls only account for a few of CBL's roster of 60-plus malls. For the most part, CBL owns mid-tier malls with mediocre sales productivity. In short, its properties have been some of the main victims of the retail apocalypse. For the 12 months ending in February, sales per square foot stood at $392, compared to $703 at industry leader Simon Property Group.

These persistent NOI declines have put stress on CBL's balance sheet, despite its deleveraging efforts (which included the suspension of its dividend last year). The REIT's weak balance sheet has led to a vicious cycle of sorts, as CBL can't afford to fully redevelop its properties to replace the dozens of department stores that have closed in recent years with stronger tenants paying higher rents.

Thus, CBL entered 2020 in a weakened state. It still had some room to maneuver, but, as I observed late last year: "It wouldn't take much of a setback to spark a new crisis." 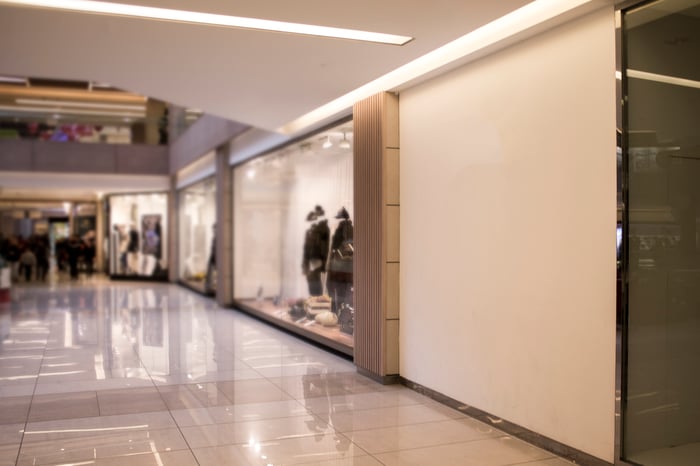 Unfortunately, CBL -- like other mall REITs -- has experienced a massive setback in 2020. The COVID-19 pandemic forced most malls to close for two months or more, sparked a string of retail bankruptcies, and damaged the finances of even relatively strong tenants. Many mall tenants have failed to pay rent in recent months, either because of a lack of cash or a belief that the pandemic and resulting mall closures entitle them to rent relief. CBL disclosed last month that it collected just 27% of billed rent in April and expected a similar collection rate in May.

Mall owners expect many tenants to repay skipped rent payments over the next year or so. But weaker mall REITs like CBL could still face a near-term cash crunch. And with a slew of retail bankruptcies and store closures likely in the months ahead, CBL's already-subpar occupancy rate is likely to fall further. The REIT will likely have to offer rent breaks to keep other tenants in place. Additional anchor store closures -- J.C. Penney is set to release a list of 242 store closures later this week -- could exacerbate this pressure if tenants invoke "co-tenancy clauses" entitling them to reduced rent (or even an early termination option).

It was in this context that CBL skipped its interest payment on June 1. With rental receipts falling, long-term capex needs for redevelopment on the rise, and mall valuations plunging, it's hard to imagine how CBL can sustain its debt load over the next few years. And if bankruptcy is inevitable, it's better to keep as much cash in the REIT's bank account as possible to maximize the chance of a successful restructuring (as opposed to a fire-sale liquidation).

With CBL & Associates now teetering on the verge of bankruptcy -- which would likely lead to common shareholders being wiped out -- many investors are probably wondering if other mall REITs are at risk.

Washington Prime (WPG) and Pennsylvania Real Estate Investment Trust (PEI -5.83%) are the two REITs most frequently compared to CBL. Both face some risk of bankruptcy for the same reason as CBL. That said, Washington Prime and PREIT have several advantages compared to their weaker rival.

Many of Washington Prime's properties are similar to those of CBL, but on the whole its malls have slightly higher sales productivity, with sales per square foot of $423 for its Tier One malls. (To be fair, Washington Prime arbitrarily excludes lower-quality malls when calculating this metric, so the raw statistics make the difference in quality seem greater than it really is.)

More importantly, Washington Prime gets about 40% of its NOI from open-air assets rather than traditional enclosed malls. These properties are insulated from the problems specific to enclosed, department-store-anchored malls. Furthermore, Washington Prime has lower leverage than CBL, giving it more flexibility to navigate the short-term headwinds from COVID-19. I'm not bullish on the REIT's long-term prospects, but bankruptcy isn't imminent, either.

By contrast, PREIT does have a highly leveraged balance sheet and a minimal liquidity cushion. Furthermore, its assets are highly concentrated in Pennsylvania, which has been slow to allow malls to reopen. This creates a meaningful near-term risk of bankruptcy.

However, unlike CBL, PREIT gets the majority of its NOI from Class A malls. Sales per square foot stands at $529 for the portfolio as a whole. Moreover, PREIT has invested aggressively in redeveloping its properties over the past few years. Many of the new tenants opened just before the pandemic hit. Between the higher quality of its properties and its recent redevelopment work, PREIT's malls could rebound from COVID-19 stronger than ever.

PREIT shareholders must be comfortable with a lot of risk. But even if the REIT does file for bankruptcy, it could follow the example of General Growth Properties a decade ago, with the share price recovering over time rather than going to zero. CBL shareholders aren't likely to be so lucky.