Please ensure Javascript is enabled for purposes of website accessibility
Log In Help Join The Motley Fool
Free Article Join Over 1 Million Premium Members And Get More In-Depth Stock Guidance and Research
By Keith Noonan – Jun 3, 2020 at 8:00AM

Get caught up on where the market is right now -- and some of the factors that could shape where it's heading next.

Investors have been faced with some unprecedented conditions in 2020, and there's no shortage of factors for stock pickers to consider while plotting their next market moves. The novel coronavirus threw the investing world for a loop and prompted steep sell-offs in March, but the brief bear market proved to be one of the shortest in history, and stocks went on to post big gains in April and May trading. To say the year's trading has been volatile would be putting it lightly.

No one can say for certain what the rest of 2020 will bring, but having an understanding of where the market is right now should help you chart your investing course. Read on for a look at three charts that should help put things in perspective.

1. The market is still down year to date despite a major recovery

Concerns about the novel coronavirus started to drag on stocks late in February and went on to prompt more pronounced sell-offs the following month. The U.S. stock market has seen an impressive recovery since hitting its 2020 low point on March 23, but it's still down significantly so far this year.

The chart below tracks the year-to-date performance of the three major U.S. stock indexes: 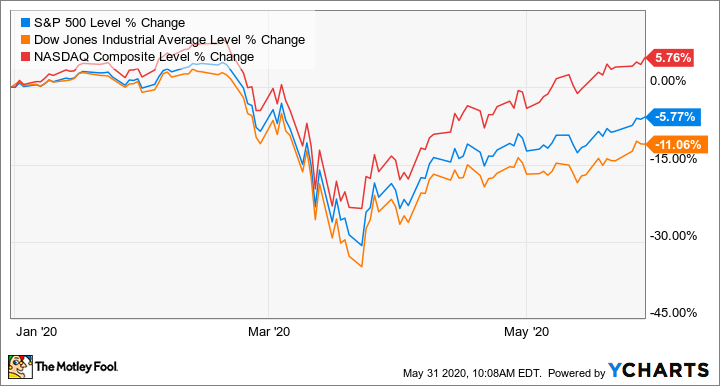 The Dow Jones U.S. Total Stock Market Index, which reflects the country's overall market performance, was down roughly 6.4% through the year at the end of May -- but it exited the month up 37.6% from the year-to-date low it hit in March. Some indexes and industries have notably managed to post gains in 2020 amid the volatile conditions.

The Nasdaq Composite index is now solidly in positive territory this year. The Nasdaq is heavily comprised of technology companies, and tech businesses in many cases have felt less strain from coronavirus-related conditions and actually benefited from associated tailwinds. Meanwhile, the greater presence of retail businesses, restaurants, and industrials in both the S&P 500 and the Dow Jones Industrial Average has weighed on those indexes across 2020's trading.

The U.S. economy entered into 2020 with very low unemployment levels, but the closure of businesses in order to stem the coronavirus's spread and a more challenging economic climate resulted in large-scale layoffs. This chart from the Department of Labor illustrates the dramatic rise of new weekly unemployment claims that kicked off in March and continued in subsequent months:

The U.S. lost a whopping 20.5 million jobs in April, and 43 states reported record levels of unemployment. The Department of Labor's most recent data indicates that more than 40 million Americans have filed jobless claims since mid-March.

The rate of new weekly jobless claims and the percentage of Americans depending on unemployment benefits have thankfully started to fall as businesses have begun to reopen, but 2020 has seen the U.S. endure record-breaking job loss and its highest unemployment rate since the Great Depression. Goldman Sachs chief economist Jan Hatzius estimates that the country's total unemployment rate will peak at roughly 25% and remain high over the next two years, and uncertainty surrounding the country's near-term economic outlook remains a pressing concern for investors.

3. All three major indexes are now up over the last year

Some analysts anticipate that the stock market will continue to see a quick recovery as the U.S. economy begins to reopen, while others hold that we're in for more turbulence in the not-too-distant future. Whatever happens next, it's remarkable that the bulls can claim victory over the bears over the last year. Take a look at performance for the S&P 500, DJIA, and Nasdaq over the last 12 months. 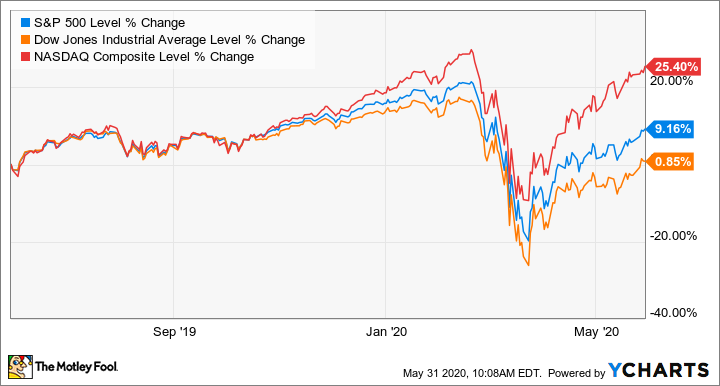 The Dow Jones U.S. Total Market Index exited May having climbed 7.8% over the last year -- an incredible feat when viewed in the context of the disruption brought about by the novel coronavirus. In addition to the performance being aided by stimulus efforts and Federal Reserve lending rates being cut to zero, market momentum has been spurred by reports of progress on vaccines for the virus and data suggesting that its communicability and mortality rates aren't as bad as initially feared.

The market continues to be volatile, so investors need to keep their eyes on the risk factors still on the table. With indications that U.S. unemployment will remain high in the near term and concerns about relations with China coming back into focus, there are still potential fault lines, even if the outlook on the coronavirus continues to improve.

Investors should be presented with buying opportunities so long as they hone in on strong companies that are well-positioned to navigate and shape any changes in their respective industries. Combining a focus on great businesses with a long-term approach and a willingness to weather volatility seems especially prudent as we near the halfway mark of a year that's been characterized by unexpected twists and turns.