Please ensure Javascript is enabled for purposes of website accessibility
Log In Help Join The Motley Fool
Free Article Join Over 1 Million Premium Members And Get More In-Depth Stock Guidance and Research
By Zhiyuan Sun – Jun 3, 2020 at 6:54AM

Here's why the timing just isn't right for investors to buy shares of a reputable weight loss company.

The COVID-19 pandemic has no doubt created havoc for non-essential businesses in the healthcare sector. Companies that were bringing in record levels of revenue in the first quarter of 2020 are now experiencing significant shortfalls and cutting full-year guidance due to these headwinds.

Today, let's take a look at a company that had just delivered record financial results but is about to see its fortunes reverse and take a rapid dive. 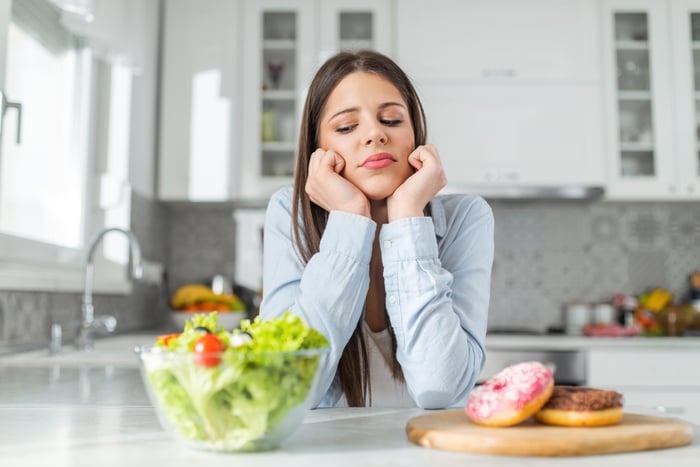 In Q1 2020, health and wellness company WW International's (WW 4.58%) (formerly Weight Watchers) revenue grew by 10% year over year to $400 million. Its total number of subscribers also increased by 9% to 5 million, which is an all-time high for any given first quarter. The company's adjusted operating income increased by 33.8%, compared to $28.5 million last year.

But business is not doing so well

Cases of coronavirus only began to pick up in the U.S. in mid-March, well into 80% of the quarter. In recent months, states and countries have enacted drastic lockdown and quarantine measures that have closed many non-essential businesses, such as that of WW's workshops.

The company runs 3,000 such facilities nationwide and closed them down at the beginning of March with plans to reopen them by May 30. During the lockdown, the company's studios were not allowed to reopen (and hence not generating revenue). However, WW is still liable for their rent, which amounts to $33.84 million each year for short-term leases and $125.335 million in total for long-term leases. As states are now reopening, investors may believe the company will see a dramatic recovery in its business segments -- but it's not likely to happen so quickly.

The main problem with this investment thesis is that there has never been a pandemic without a second wave in recorded history. Hence, I think it's only when, not if, the next wave of COVID-19 sweeps across the globe. When it happens, the same lockdown and quarantine measures will likely be reenacted, forcing WW's studios to close again. Respiratory pandemics such as H1N1 and Spanish Flu had second waves that infected several times more people than the first waves, and could result in extended closure of non-essential businesses should COVID-19 follow the same pattern.

The effect of shutting down WW's studios has been nothing short of devastating. In an anonymous post on TheLayoff.com, a purported employee disclosed that WW fired thousands of employees over Zoom in a short period. The company's staff only numbered 17,000 at the end of last year, most of whom were part-time.

Low cash balance is another problem for WW. Recently, a class action lawsuit filed in New York alleged the company was still charging membership fees despite the total cessation of its in-person workshops. During a recession, discretionary spending from consumers tends to decrease dramatically due to rising unemployment, which is now hovering above 20%. For WW's $21/month digital plan and $55/month in-person coaching plan, this does not bode well.

Currently, WW has only $290 million in cash to offset $1.83 billion in debt, revolving credit, and long-term leases. Meanwhile, about half of its operating income last year went to the payment of interest expenses alone.

I expect WW's revenue and bottom line to decrease significantly in the next quarter. With its core business materially affected by COVID-19, apparent mass layoffs, and decreases in discretionary spending stemming from widespread unemployment, I think there are many better opportunities in the healthcare sector for investors to consider buying.

With A Rebrand And A New App, Will WW International Rebound In 2020?