Please ensure Javascript is enabled for purposes of website accessibility
Log In Help Join The Motley Fool
Free Article Join Over 1 Million Premium Members And Get More In-Depth Stock Guidance and Research
By Billy Duberstein – Jun 3, 2020 at 7:37AM

The oil and gas midstream company maintained its sky-high 17.6% dividend even in the face of COVID-19.

Shares of oil and gas midstream operator Crestwood Equity Partners (CEQP 3.62%) rose 29.9% in May, according to data from S&P Global Market Intelligence.

Crestwood Equity Partners was particularly hard-hit by the oil and gas price crash in March and April, so there was a bit of recovery from that downturn. In addition, the company reported better-than-expected earnings on May 5. As the month went on, more and more signs of economic reopening fueled hopes around oil and gas production, further boosting Crestwood's shares. Even better: The company maintained its May distribution payout, now yielding 17.6%. 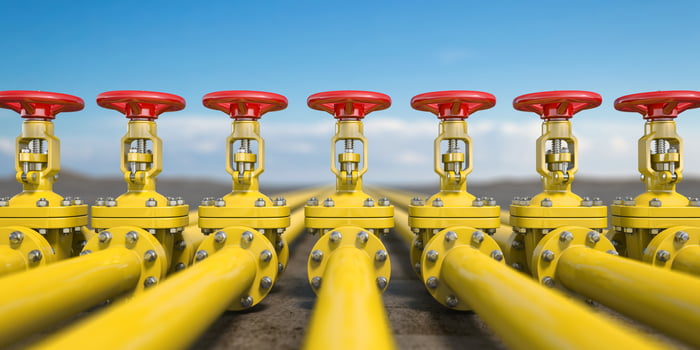 One important difference between Crestwood and other oil and gas companies is that it's more diversified than pure oil producers. Crestwood's business spans three segments, including gathering and processing, storage and transportation, and marketing and logistics. While the company's gathering, processing, and transportation segments are all impacted by volumes, and not the price of oil, a low oil price could mean lower volumes in the second quarter, which will hurt these segments.

On the other hand, the company's storage and marketing units could actually make higher profits as a result of the first-quarter oil crash, as Crestwood buys up barrels at rock-bottom prices. Crestwood's footprint also spans both oil and natural gas basins, and natural gas didn't crash as hard as oil did in the first quarter.

On its May 5 earnings release, management did lower its full-year outlook, but still forecast profits and cash flows this year. Given the huge crash in share prices through March and April, that's a great sign. Management lowered its adjusted EBITDA outlook to $520 million to $570 million, down from $590 million to $620 million. It also cut its distributable cash flow (DCF) metrics to a range of $290 million to $340 million, down from $350 million to $380 million, while increasing its end-of-year leverage ratio to a range of 4.25 times to 4.75 times, up from 3.5 to 4.0.

While it's not great that Crestwood lowered its estimates, those aren't catastrophic numbers by any means. Encouragingly, Crestwood paid out its May distribution, which still yields a stunningly high 17.6%, even after the stock's rise in May. Even better, the company's current $2.50 payout would only come to $182 million based on the current units outstanding, which is covered by over 1.7 times, even by management's reduced DCF estimates.

But the company hinted it may alter its distribution policies later in the year to either pay down debt or perhaps use the cash in other value-enhancing ways. Management said it "will continue to evaluate multiple capital allocation alternatives including a full reevaluation of its previously stated distribution expectations." So investors can't necessarily depend on the current payout remaining through 2020, though one can expect Crestwood's management to use excess cash wisely, perhaps buying back debt at a discount.

Oil prices have risen off their April lows, with WTI and Brent crude back up in the high-$30 range. That's much better than the shocking negative oil prices we temporarily saw in April, but still not high enough for many domestic producers to make profits.

As with many energy-related stocks, results for Crestwood will likely depend on the pace of economic reopening and subsequent travel activity. If it's better than expected, Crestwood's stock could move from the low teens back to the $20s or even the low $30 range, where it started the year. But if a second wave of the coronavirus hits and oil and gas prices crash again, all bets are off.

Still, Crestwood's profitability and relatively low leverage compared with its peers make it an intriguing play for high-risk investors looking to bet on an economic recovery, even after May's strong gains.