Shares of Denny's (DENN -0.84%), Ruth's Hospitality Group (RUTH -1.75%), and Dine Brands Global (DIN -1.27%), various restaurant chains, all jumped today after positive sales data and trends from Cheesecake Factory and Red Robin Gourmet Burgers pushed the sector higher. At the close on Wednesday, Denny's was up 11.9%, Ruth's was up 8.8%, and Dine Brands was up 9.5%.

The broader restaurant industry was feeling some relief Wednesday after Cheesecake Factory and Red Robin released business updates that emphasized dine-in crowds were rebounding. Management announced that Cheesecake Factory restaurants have generated roughly 75% of prior-year sales levels, driven by an increase in off-premise sales and its rebounding dine-in business that is operating under local capacity restrictions. Roughly 25% of Cheesecake Factory restaurants have reopened dining rooms with limited capacity, and management hopes that roughly 65% of dining rooms will be reopened by mid-June.

Red Robin is a step ahead in terms of reopening its stores. Management expects to have 270 dining rooms operating with limited capacity by June 7, which is roughly 65% of the company's restaurants. One encouraging takeaway from Red Robin's data was that it recorded five sequential weeks of sales improvement through May 24. A great sign for investors is that management noticed restaurants that opened up dining with limited capacity are still generating meaningful off-premise sales. That suggests that as restaurants fully rebound, chains that developed strong off-premise deals could take market share and incremental sales from restaurants that didn't (or couldn't) develop off-premise sales.

Ruth's Hospitality Group, which has over 100 steakhouses; Dine Brands, known for its Applebee's and IHOP brands; and Denny's, a staple breakfast chain, all stand to benefit if they see trends similar to Cheesecake Factory and Red Robin. The sales data and trends from the previously mentioned restaurants emphasize that some restaurants could be stronger post-crisis thanks to newly developed off-premise strategies. The data also showed that consumer spending could rebound more quickly than anticipated, and that restaurants could operate at limited capacity without being crippled. All are positive factors and likely driving forces behind much of the restaurant sector gains on Wednesday. 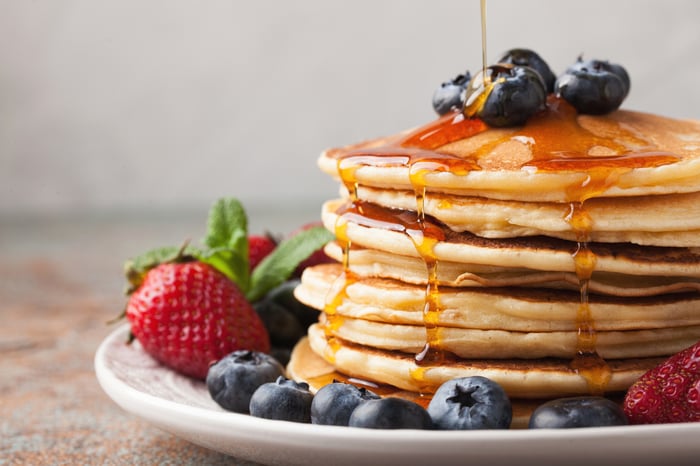 Although the sales data and trends previously mentioned were positive, investors also have to remember that many restaurants will still be announcing serious financial pain during the second quarter. Cheesecake Factory, for instance, still recorded a 63% decline in same-store sales during the second quarter through May 31. Ultimately, restaurant stocks have been hammered, and now that data is emphasizing the worst could be over, it's no surprise to see so many stocks rising Wednesday.