Please ensure Javascript is enabled for purposes of website accessibility
Log In Help Join The Motley Fool
Free Article Join Over 1 Million Premium Members And Get More In-Depth Stock Guidance and Research
By Zhiyuan Sun – Jun 4, 2020 at 6:34AM

Here's how one biotech company can make investors rich, and why another should be avoided.

Today, let us look at why it's the perfect time to buy one biotech stock and why investors should avoid another for the time being. 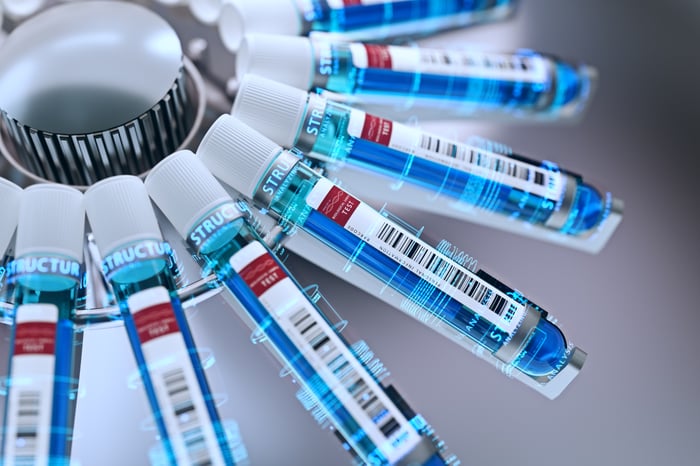 The stock to buy

In May, Aurinia Pharmaceuticals (AUPH -1.60%) submitted its New Drug Application (NDA) to the U.S. Food and Drug Administration (FDA) to commercialize Voclosporin as a potential best-in-class calcineurin inhibitor to treat lupus nephritis. Here's how the company describes the disease:

Lupus nephritis (LN) is an inflammation of the kidney caused by Systemic Lupus Erythematosus (SLE) and represents a serious progression of SLE. SLE is a chronic, complex and often disabling disorder. The disease is highly heterogeneous, affecting a wide range of organs and tissue systems.

Voclosporin functions by inhibiting the IL-2 immuno-expression, along with T-cell mediated responses in the kidney. The total number of patients with SLE in the U.S. is estimated to be 445,000. Out of this population, about 50% of patients develop LN. A research report published by Research And Markets estimates the total addressable market for treating LN to be $1.36 billion globally.

In clinical studies, 40.8% of patients who took Voclosporin and standard of care (SOC) demonstrated renal response (improvement in the level of kidney function), compared to 22.5% of patients who received SOC alone. The difference was highly statistically significant.

It is highly likely the drug will receive approval due to outstanding efficacy and tolerance levels compared to placebo. After an NDA submission, a panel of FDA experts will vote on the drug's approval within a period of eight to 12 months.

With more than $286 million in cash and investments and no debt, Aurinia is optimally positioned to launch Voclosporin. The company only has a $16.5 million quarterly net loss, which should postpone any stock dilutions until the drug starts to bring in revenue. Overall, this is a late-stage biotech company with a successful product investors should not want to miss.

The stock to avoid

Recently, Sorrento Therapeutics (SRNE -1.27%) found itself in a great deal of controversy after the company announced it had discovered an antibody that is 100% effective at inhibiting SARS-CoV-2 in preclinical models. Indeed, an investor brought a lawsuit that alleges it overplayed its discovery when company executives made the following statements on Fox News:

We want to emphasize there is a cure. There is a solution that works 100 percent ... If we have the neutralizing antibody in your body, you don't need the social distancing. You can open up a society without fear. As soon as it is infused, that patient is now immune to the disease ... For the length of time, the antibody is in that system. So, if we were approved [by the FDA] today, everyone who gets that antibody can go back to work and have no fear of catching COVID-19.

As it turns out, if something is too good to be true, then it usually is. Sorrento's antibody has not yet been tested in humans, and therefore its efficacy claims should be taken with a grain of salt.

"But wait," the intelligent reader might say, "even though it has not been tested in humans, a 100% response rate in inhibiting the coronavirus in laboratory cells is excellent and should be indicative of future success in clinical trials." Unfortunately, this is not the case.

Take the case of Gilead Sciences' (GILD 1.02%) remdesivir, an FDA-authorized ribonucleotide for the treatment of COVID-19. Remdesivir showed 100% efficacy in inhibiting the Ebola virus when tested in monkeys in the U.S. Army Medical Research Institute of Infectious Diseases' (USAMRIID) medical lab. However, it was later found to have little to no efficacy when the drug was given to humans.

It is tough to bring an experimental therapy to the market. The probability of success for a therapeutic candidate to reach FDA approval from phase 1 is approximately 10%, which is far from the rosy dream investors may believe about a potential coronavirus cure.

Unfortunately, Sorrento disclosed in its recent filings that it has just $21.9 million in cash on hand versus more than $182.96 million in long-term debt. The company is also not profitable, generating up to $7.72 million in revenue per quarter but operating at a quarterly loss of $69.18 million. It is very likely the company will need to raise capital and dilute investors shortly.

Meanwhile, the company has a large market cap of $1 billion. In my view, it is best to avoid this stock until the company can prove the antibody can neutralize coronavirus in humans in later trials. The valuation at the moment doesn't justify the company's potential, given that it has a high likelihood of failure like all experimental therapies for COVID-19.