Please ensure Javascript is enabled for purposes of website accessibility
Log In Help Join The Motley Fool
Free Article Join Over 1 Million Premium Members And Get More In-Depth Stock Guidance and Research
By Donna Fuscaldo – Jun 5, 2020 at 11:25AM

Broadcom indicated that the normal revenue uptick from orders from Apple for its next-generation iPhone is being pushed out into the fourth quarter.

Chipmaker Broadcom (AVGO -1.36%), which supplies wireless semiconductors to Apple (AAPL -3.00%) for its iPhone, hinted the next iteration of the device will be delayed.

During a conference call to discuss second-quarter results and provide guidance for its current quarter, Broadcom CEO Hock Tan said the company  would typically see a double-digit quarter-over-quarter uptick in wireless chip revenue due to increased orders for next-generation smartphones from its "large North American mobile customer." But this time around, that revenue increase is getting pushed out. According to Bloomberg, Tan typically refers to Apple in that manner. 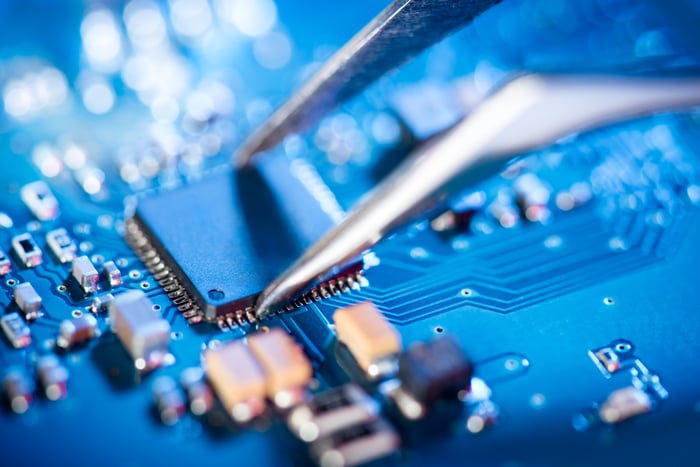 The CEO said the uptick will likely come in the company's fiscal fourth quarter, which ends in early November, and, as a result, the company expects wireless revenue in the third quarter to be down compared to the second quarter.

Speculation has been surging for weeks that Apple would delay the launch of its 5G iPhone due to supply chain problems brought on by the COVID-19 pandemic. The iPhone maker usually launches its latest iteration of the iPhone in September, but in some cases has pushed it out to later in the year.

During the conference call, Han said the chipmaker was still experiencing supply chain challenges, which is resulting in more demand than it can supply at the current time. Han pointed to extended lead times and intermittent COVID-19 lockdowns that have impacted its Malaysia operations. It's also experiencing logistics delays. The supply/demand imbalance may persist throughout the current quarter, Tan said.