Please ensure Javascript is enabled for purposes of website accessibility
Log In Help Join The Motley Fool
Free Article Join Over 1 Million Premium Members And Get More In-Depth Stock Guidance and Research
By Rhian Hunt – Jun 5, 2020 at 11:12AM

E-commerce is booming and stores are rapidly opening their doors to the public.

Casual and lifestyle clothing retailer Gap (GPS -0.95%) reported its first-quarter 2020 results yesterday, unveiling both an operating loss of $1.2 billion and a faster-than-expected reopening. The company already posted a significant loss of $184 million in the last quarter of 2019, but following the impact of COVID-19, the first quarter of this year dwarfed that figure, representing its single biggest drop since its founding a half-century ago.

The company's earnings per share (EPS) and revenue both missed analyst consensus expectations. Its EPS under generally accepted accounting principles (GAAP) fell $2.17 short of expectations, with its $2.51 loss well below the forecast loss of $0.34 per share. Revenue fell more than 43% year over year to $2.11 billion, about $240 million less than anticipated. 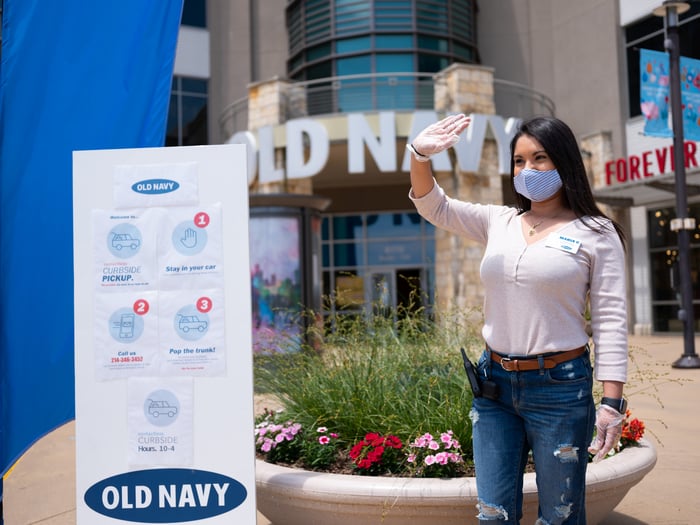 The report included some good news as well. CEO Sonia Syngal said that the reopening of Gap's various stores as the pandemic eases is going better than expected, remarking, "we have more than 1,500 stores open in North America, ahead of plan, and as stay at home restrictions ease in many markets, we expect to have the vast majority of our North American stores reopened in June."

Syngal also noted Gap's online sales are growing very fast, posting 40% expansion in April and ballooning 100% in May. Earlier, online sales rose by 13% year over year during Q1. Out of Gap's main brands, Athleta showed the strongest online sales growth during the first quarter, with a 49% increase in e-commerce, while Old Navy took second place with a 20% increase in online purchases.

After a brief rise, Gap's stock is down approximately 4% in Friday morning trading.